On our way out? 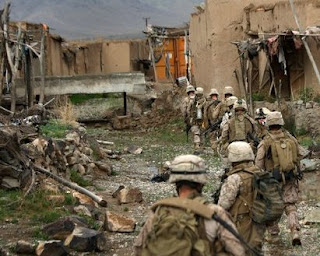 With yet another three soldiers reported killed in Sangin, bringing the total up to 204, the Scottish Daily Herald is reporting on a UK opinion poll on our involvement in Afghanistan.

From this we learn that some 57 percent believe British forces should not be in Afghanistan at all, only 13 percent think it is "very clear" why the UK military is there and 82 percent say the UK Government is not doing enough to support our troops. Undoubtedly, sentiment has been heavily influenced by the rush of casualties over the last two months and, as public opinion hardens, the opposition to our continued presence is only likely to increase.

But, if The Daily Telegraph is any guide, the growing public wish for withdrawal might come sooner than expected. Defence secretary Bob Ainsworth, it appears, is telling us that the mission in Afghanistan could largely be concluded as soon as 2010.

That the mission was to undergo fundamental changes was in fact signalled by Gordon Brown in his announcement on the AF/PAK strategy at the end of April, where he intimated that, from the autumn, greater effort would be devoted to training and mentoring Afghan security forces, with a view to an accelerated hand-over of responsibilities to them.

Whether this is realistic in view of the known inadequacies of the Afghan forces is moot, but it provides a political figleaf to cover our progressive disengagement, much as we did in Iraq, enabling us to declare a "victory" and leave with the flags flying.

In fact, according to Mick Smith in The Sunday Times, there are other pressures in theatre which may lead us to disengage even faster. These are coming from the Americans who are expressing their concern about the inability of the British to hold and stabilise Musa Qala district, in addition to their current commitments in the so-called green zone.

Following Operation Panther's Claw, which had British troops "clearing" the Taleban from 150 square miles of the green zone north and northwest of Lashkar Gah, troops have been left exhausted and there are barely enough men to mount "framework patrols" to secure the area.

Thus, the US forces are taking a more and more active part in operations, even to the extent of sidelining the British command structures, centred on the Permanent Joint Headquarters (PJHQ) in Northwood, west London. In theory PJHQ controls all British military operations abroad, but is increasingly toothless. With the Americans taking control of most of Helmand, it has lost much of its role.

That much is evident to the west of Musa Qala where, this weekend US Marines and Afghan officials completed yet another operation in Now Zad, this time hoisting the Afghan flag over the deserted town (pictured). Through the week, 400 Marines, with 100 Afghan troops had been taking part in operation Eastern Resolve II and are mow claiming to have regained control of the district.

Until recently, the US Marines have had only a tenuous grip over the district, taking considerable casualties, with a lone company responsible for policing the area.

Now Zad was, of course, one of the four original British "platoon houses", which included Sangin, Kajaki and Musa Qala. Now the US has taken total responsibility for Now Zad, if Musa Qala is also taken over, then half of the "outstations" held by the British will have gone.

But, if the casualty rate at Sangin - with over 50 dead - continues, it will only be a matter of time before there are serious questions as to whether holding this district is tenable by British forces. Certainly, it cannot be long before the media focuses on this area and the toll it is extracting, creating a situation where US forces might feel impelled to move in and then, eventually, take over.

By slow progressive moves, therefore, British involvement – at least in terms of the areas occupied – could gradually be scaled down, leaving a situation where one can imagine that the force is concentrated on Lashkar Gah and then Bastion, before retreating entirely to barracks and thence onto the ramps for the final airlift which will take them back home - and military oblivion.

The likelihood is that Gordon Brown's administration is unlikely to see this end game but Brown's successor will almost certainly see it to fruition. There is no longer any appetite for this war, either in the British public or even in the military – and the current casualty rate is politically unsustainable. Despite the analysis from Michael Evans in The Times, given a figleaf by the Americans, we will be gone.