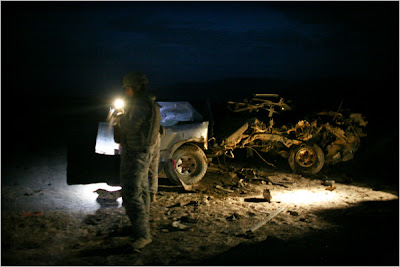 Although ostensibly addressing a serious deficiency in our military capabilities which is affected the campaign in Afghanistan, there is something distinctly tawdry about the way the Defence Committee has today "rushed out" a report on helicopter lift.

The nuance would not be apparent to most but this is the same committee which has never seriously addressed the issue of mine/blast protected vehicles – and the management of the IED threat generally. Yet, a significant proportion of the current casualty rate stems demonstrably from inadequacies in the Army fleet of vehicles, and the lacklustre approach to controlling IEDs. The problem here is far more serious than the perceived shortage of helicopter lift.

On that basis, it is very hard to escape the conclusion that chairman James Arbuthnot is indulging in the not-unknown political sport of bandwagon-riding, hitching his star to an issue because it has – more for the sake of expediency than on its intrinsic merits – been catapulted into the public consciousness.

One cannot nevertheless gainsay all the Committee's findings or its primary conclusion that the lack of helicopters is "undermining operations". Even then, we could dispute its conclusion that this stems from a shortage of medium and heavy lift battlefield helicopters.

When one looks at the ponderous tactical deployment of British forces in the field, and the intrinsic vulnerabilities of such helicopters, there is at least an argument that the operational need would be better served (in part at least) by a larger number of smaller, tactical helicopters, on the lines of the Rhodesian "Fireforce" model which deployed multiple sticks of four soldiers from Allouette III helicopters, each machine armed with a 20mm cannon.

Arbuthnot and his merry men, however, do not even enter this territory, trapped as they are in an orthodoxy which rests with their oft' demonstrated inability to think outside the box – or draw evidence from outside the military-industrial complex.

Thus we see the Committee recommending the "pork barrel" route to enhancing capacity, going for the procurement of new helicopters, oblivious to alternatives and totally ignoring the cost implications. More seriously, given that the capacity shortfall needs addressing urgently, the MPs have opted for the slowest possible route, offering absolutely nothing that will fill immediate needs.

Then, although not given prominence in the Committee's press release, the
"bandwagon agenda" emerges in the media coverage of the report, as was surely the intention. Thus we have The Times currently reporting that, "The lack of helicopters available to British troops in Afghanistan is costing lives, MPs concluded today." Worryingly, we also see written, the assertion that:

Extra medium-lift support helicopters would cut down on the number of road convoys that have proved vulnerable to Taleban attacks. Twelve of the 15 deaths in Afghanistan over the past fortnight have been caused by roadside bombs.

This, possibly, is added in by the journalist Michael Evans, and relies in part from the populist (child-like, even) tendency to describe IEDs as "roadside bombs".

However, to make the link between these casualties and a shortage of helicopters is tendentious, to say the very least, if not downright dishonest. But, once the virus is in the system, never let it be said the British journalists will ignore it. This is now the narrative, and narrative it shall be.

As for cutting down the number of road convoys, thereby reducing the number of attacks, we have the news of the recent loss of the Mi-26 which was performing precisely the role of cutting down road convoys, yet neither Michael Evans nor the Defence Committee take this into account. One could take the cynical view that, because only six Ukrainians and an Afghani child died, this does not matter – as long as our "Brave Boys" are not killed.

But, as David Axe discusses, although civilian helicopters may not be as well protected from missile (MANPAD) threats as military hardware, this machine may have been brought down by an RPG – against which there is no protection other than tactical flying.

Yet, as one of our readers reminded us, not too long ago, an RAF Chinook was very nearly brought down by an RPG. Only exceptionally skilled flying – and luck - saved the day. And, if that is hazard enough, if the Taleban do manage successfully to deploy anti-aircraft guns, the machine they hit is toast. "Game over," as we said. It is unlikely that the momentum for withdrawal would be stoppable.

In his narrow pursuit of more helicopter lift, therefore, Arbuthnot and his committee may be pushing for a course of action which might increase risk, not reduce it – even without taking into account other factors, which we rehearsed in an earlier post.

The idea that transferring troops from the roads to helicopters very much stems from experience in Northern Ireland but, as we pointed out, the situation in Afghanistan is not the same. While in the earlier campaign, the troops were largely the targets of the terrorists, in Afghanistan, the Afghani security forces and the civilian population are also being killed. If we abandon the roads, in pursuit of the notional (but possibly ephemeral) safety of our own troops, we cede the game to the terrorists.

This is brought home by a recent, haunting piece in the New York Times which refers to the tendency of the coalition forces to look after their own, concerning themselves less with the safety of Afghan forces who work alongside them and who are taking far greater casualties.

Given that the strategic plan is eventually to hand over to Afghan forces, it is difficult to accept that these personnel will even begin to assume the burden as long as they see their better-equipped – and highly risk averse - "partners" using their resources to avoid the very hazards to which the indigenous forces are also exposed, with far greater consequences (pictured above – an ANP patrol vehicle destroyed by an IED which killed five, including a senior commander).

Support for the Afghanis, therefore, would suggest that we have to share the same threat environment, which means that countermeasures and protection must apply to all, not just the select few.

The answer there – in dealing with IEDs – is not for coalition forces to run away from the threat but to deal with it, using the many technical and other measures at their disposal, to ensure not only their safety (as far as that is possible) but also to protect Afghani forces and civilians.

While, thus, the Defence Committee is enjoying the ride on its new-found bandwagon, it is missing the point – perhaps deliberately – and playing with peoples' lives.