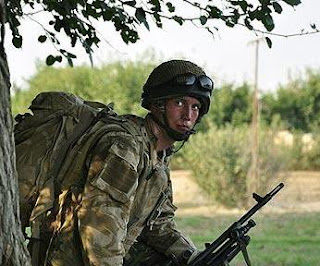 Asking a journalist to write an account of a series of actions in which his soldier brother was seriously injured does not seem the best way to ensure objective writing.

But such is the task of Miles Amoore, working for The Sunday Times, whose younger brother Jim, 24, a second lieutenant with 2 Rifles, was blown up as he walked through a compound door in Wishtan, near Sangin, to reach fellow soldiers hit by another explosion.

In a piece entitled "Carnage in Wishtan, 'the devil's playground'", Amoore claims to be the first reporter to reach Forward Operating Base (FOB) Wishtan and speak to those fortunate enough to have survived a series of bomb incidents which he describes, the drive from Sangin to the base taking him along "a dirt track known as Pharmacy Road".

Pharmacy Road is, of course, familiar to us, the subject of the famous report from Michael Yon, who dealt with the operation to clear the road, an operation which the MoD also described.

Amoore adds to these accounts, confirming something that we had worked out for ourselves – although never admitted by the MoD. "Until bomb disposal experts cleared this road," he writes, "the soldiers in FOB Wishtan had lived under virtual siege, supplied only by helicopter. The Taleban had placed a cordon of mines 50 yards from the perimeter walls of the base."

Previous accounts, however, refer to near misses, as helicopters delivering supplies were attacked. This, with Amoore's additional detail, further supports the contention that the base was effectively cut-off and that "Operation Flint", deploying 200 soldiers from 2nd Battalion The Rifles, was an emergency measure to break the siege and allow a supply convoy through.

These details are important as they illustrate the increased power of the Taleban, the perilous situation of British troops and, all importantly, the failure of the MoD – and indeed the media – in any way to convey how serious the situation really was.

Also supplied by Amoore is more detail of the Taleban tactic of laying multiple IED ambushes, with primary devices and secondaries emplaced to kill or injure personnel coming to the rescue of those caught by the initial blasts – about which we have written, in some detail as the tactic became apparent.

But what is lacking from Amoore's account is any sense of complaint or criticism, as he records soldiers – including his own brother – being sent out time and time again to patrol an area known to be seeded with IEDs. He simply records that, of the 120 soldiers who served at Wishtan in the past six months, one in three has been killed or injured, the vast majority - eight killed and 30 wounded, including Amoore's brother - caused by IEDs.

There are many reasons why one should be critical of the Army for allowing this to happen. The positioning of an isolated base, without the manpower or the equipment to keep the supply route or the patrol area safe, was asking for trouble. The failure of the Army to adapt its patrol pattern – or suspend patrolling altogether – once the new threat had been experienced, is unpardonable.

What is now also clear – from Amoore – is that there was plenty of warning. In April soldiers could patrol more than a mile from the base, carrying full kit and weapons. But as the poppy harvest came to an end in May, he writes, "the warning signs began to appear."

The Taleban blocked alleys with lumps of concrete, channelling the soldiers onto paths booby-trapped with IEDs. They mined doorways, forcing troops to enter compounds by blowing "mouse holes" in the thick mud walls. Then they mined those, too. "Everything started to tighten up. We knew it was coming," said 9 Platoon's Sergeant Jamie Moncho, a softly spoken soldier of Italian descent.

One prominent casualty, on 20 August, was Sgt Paul McAleese, killed as he tried to recover the body of Private Johnathon Young, the circumstances of whose death Amoore describes in detail.

With the benefit of the overview gained from piecing together the many disparate pieces written about Sangin and Wishtan, we have been highly critical of the failures, and had already argued for better solutions to combat the threats.

Despite what have been very obvious military failures, however, The Sun chose to exploit the death of Sgt McAleese as a tool to attack the government, illustrating perfectly the thesis enunciated by Paul Robinson.

In this case though there is criticism but it does not come from us. In a comment on Amoore's piece, James Duffield, who describes himself as "ex Sapper to Capt 1967-1988", asks: "Where were their Sappers in 'intimate' support? Where are the Explosive Detection Dog teams? Where are the officers demanding this support? Where is the UK in providing it?"

He may not be covering all the bases, but his final point does sum it up. "Bloody criminally sad," he writes.