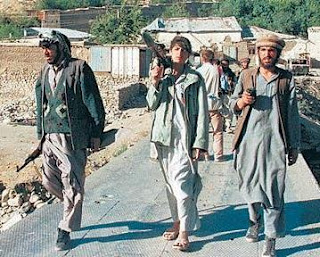 As we get more embroiled in the Afghan venture, with strong hints that the UK is to commit yet more troops to the country – bringing our establishment up to 9,500 or thereabouts – and as we struggle to devise a credible exit plan, what if we have the strategic concept totally wrong, and we are trying to do the impossible?

In theory, at least, we are trying to create a "self-sustaining, stable and democratic Afghanistan", supporting the Kabul government and attempting to extend its writ across the whole of the "ungoverned space" that is resisting its rule.

For convenience, we label our attempts a "counter-insurgency" and identify our enemy – the enemy of Kabul – as the "Taleban", a generic title which covers a multitude of sins. And, in accordance with current counter-insurgency doctrine, we "win" when we convince enough of the population that their path to salvation lies with the government rather than the insurgents.

Then, according to that doctrine, the population turns on the insurgents, supports the government forces and thus enables to government to extend its rule, doing what governments are supposed to do, improving the prosperity of the people and their life chances.

But what if this is not a classic insurgency – as many people are saying, as indeed history tells us? And what if the "enemy" is not the "Taleban", as such – but a particular people, the Pashtuns? What if this is a nationalist movement, seeking to reunite a fragmented population spread across the border into Pakistan, into a single nation, and thereby throwing off the yoke of the Kabul government?

A clue that this might be the case was given by Major Mehar Omar Khan, but there are many, many more clues for those that wish to see them. Says Major Khan, what we are facing in Afghanistan is a "Pashtun Intifada". It is only "led" by bearded mullahs calling themselves "Taleban". Take out the Taleban and the insurgency will continue, he adds.

The sense of a wrong direction is reinforced today by a piece hosted by The Daily Telegraph, written by Vladimir Snegiryov, as a "special" for Russia Now.

Snegiryov, an Afghan specialist, tells us that the overwhelming majority of Afghans are absolutely indifferent – both to Communism and to the values of Western democracy – and reject any foreign interference. No one should be deceived, he says. Nato is only tolerated because, along with guns, its people are bringing bread and dollars.

It's a big mistake, Snegiryov warns, to think Nato is fighting terrorists in Afghanistan. The Taleban is an ideology that thousand of Afghans sympathise with, covertly or overtly. That's why, like 25 years ago when the Russians were seeking a way out, a military solution to this problem doesn't exist. Only 25 years ago, when Snegiryov's compatriots were fulfilling their "international mission", the "enemies" were called Mujahideen instead of Taleban.

In respect of the current phase of the conflict, however, Snegiryov is being too loose with his wording. We are not dealing with Afghans, but Pashtuns. The insurgency is a Pashtun uprising. We are fighting Pashtuns.

And, as Snegiryov and his Russian compatriots found out before us, and the coalition forces are now finding, they do not want us there. It does not matter what we do for them, what blandishments we offer them, they will never buy into our agenda. They have their own.

In fact, they have several agendas, because the Pashtuns are not a homogenous group. One thing for sure, they are peoples we do not understand and we thus have little chance of winning their "hearts and minds". And nor, as the Russians found, can we bomb them into submission. We need, it seems to me, completely to rethink our strategy.