A great deal of consensus 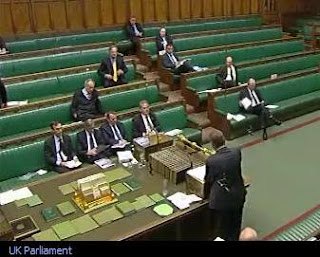 Yesterday, there was a defence debate in the House of Commons. It was scarcely, if at all, reported in the media. And you can actually understand why. Even with the strongest possible motivation, less time constraints, and the luxury of the full Hansard transcript, it is difficult to make any sense of it.

Occupying five and a half hours, producing the best part of 50,000 words, the transcript runs to about half the length of a sizeable novel. The great difference, however, is that while novels tend to have an identifiable plot, a manageable cast of characters and a coherent structure, this debate lacked all three.

This is partly the fault of the government, which decides on the specific subject of the debate, and the MPs themselves, who permit the government to do so. The problem here is that the subject was "defence policy", so wide and amorphous in its scope that it covers too much ground, and thus allows MPs too much lassitude in the issue they chose to address.

Following the debate is not like observing a tightly-scripted drama. It is more like sitting in a crowded room trying to make sense of multiple, disjointed conversations. Without even a motion on which MPs were to vote, which might have given the debate some shape, there was no discernable theme from which one could possibly assess the mood or "will" of the House.

Yet, in theory at least, this is the forum in which the government is held to account, its precepts challenged and its performance questioned. There was very little sense of an accounting from this performance.

As is the custom, the debate was opened by the Secretary of State for Defence, Mr Bob Ainsworth. He begged to move: "That this House has considered the matter of defence policy." It went downhill from there.

"Bumbling Bob" as he is often unkindly called, tried to shape the proceedings by confining his remarks to just two issues: "the delivery of our operation in Afghanistan" and, "how we are preparing our armed forces for the future, including procurement and acquisition reform."

In fact, we got a great deal of Afghanistan and very little of the rest and, when it came to the vexed issue of Afghanistan, the debate was killed before it even started. "I have looked closely at the statements and the speeches of Opposition Front Benchers", said Bob, "and have found that there is a great deal of consensus in what we say." No one demurred. 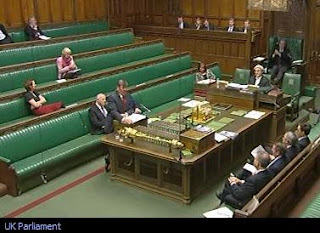 "We agree that, unlike Pakistan, Afghanistan does not yet have the capacity to resist the Taliban-led insurgency on its own. We agree that building Afghanistan’s capacity to do that will mean that, over time, we will be able to reduce our military commitment, which is why we agree to focus on the training and the partnering of the Afghan security forces."

"We agree that the security space provided by NATO operations must be used to build and develop Afghan governance in order to give the Afghan people a stake in their own future and to help them to turn their backs on the Taliban-led insurgency. We agree that military and development operations must be backed up by a political strategy that bears down on the insurgency and begins the process of reconciliation."

"We agree that the consequences of failure in Afghanistan would be disastrous: it would be seen as a victory for the violent extremists, increasing the threat of terrorism back here at home; it would destabilise a particularly sensitive region, including nuclear-armed Pakistan; it would seriously undermine NATO, which has been the bedrock of our defence for the past 60 years; and it would damage the reputation of Britain's armed forces and call into question the ability of the UK Government to project power in the future."

The opposition front benches were silent, the only dissent coming from backbencher Tobias Ellwood (Bournemouth, East) (Con). As far as the Conservatives were concerned, support, he said, extends only to the support given to the armed forces.

Time and again, he asserted, we have suggested that the Government are adopting the wrong strategy in Afghanistan. That has now been proved by Admiral Mullen saying that we need to change - General McChrystal said the same in his report.

Thus did Ellwood ask: "What does the Secretary of State say about that now? How will things change in Afghanistan, given that in his report General McChrystal is quoted as saying: ISAF is a conventional force that is poorly configured for COIN. What will happen in respect of British troops so that we change and adopt a new strategy?"

Ainsworth had an immediate counter. The reason he had read out the list of agreements, he told the errant backbencher, was "to prove that what the hon. Gentleman says is not true." The list was an analysis of statements made by his own Front-Bench team and by the Front Benchers of other parties over time. It proves that there is widespread agreement on our strategy for Afghanistan.

Inevitably, Ainsworth went on, people will have a political view and some Back Benchers will disagree with their own Front-Bench team and with the Government Treasury Bench team on particular aspects.

People should hold the Government to account, he said, but all I ask is that when dealing with a situation this serious, where 9,000 people are deployed in a very dangerous environment, we should not pretend that we disagree about things that we do not disagree about.

And nobody did disagree about things they did not disagree about. There was indeed a great deal of consensus, and no one disagreed with that either. If there is to be a strategic debate on the conduct of the mission in Afghanistan, the House of Commons is not the place to go for it. All you will get there is agreement.

In fact, so much "agreement" was there that very few MPs found it necessary to turn up (pictured). They, like the media, had better things to do.