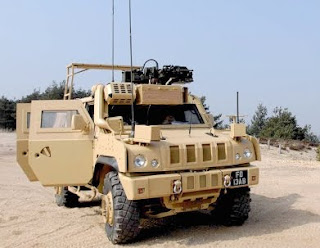 No matter how much effort is spent trying to understand the increasingly complex situation in Afghanistan, even just a brief exposure to the British media undoes all the work and one can feel the comprehension slipping away under the weight of their confusion.

Today, the media is attempting to come to terms with the complexities of equipping troops with suitable vehicles for the campaign, offering a number of stories variously based on an MoD briefing yesterday, a background press briefing and comments by defence secretary Ainsworth at the Labour party conference.

Michael Evans of The Times was one of the first into the fray, with the benefit of the MoD briefing. The line he chose was: "British troops face another year without enough vehicles in Afghanistan", telling us that senior military commanders had "admitted" that the 9,000 British troops in Afghanistan would not have all the armoured vehicles they need for patrols until the end of next year.

You can immediately see which way this is going. The MoD offered a detailed briefing to inform journalists of the some of the realities of producing military vehicles and preparing them for theatre, and this is presented in the entirely negative sense of senior military commanders having "admitted" something which is then seen to be a failure.

Actually, if any journalist – or anyone else for that matter – had followed the announcements on equipment packages, the order dates and the scheduled in-service dates, they would already know that the bulk of vehicles on order were not due for delivery until 2010 – with some coming even later. This, therefore, is not a question of such information being "admitted". It is already in the public domain.

It has been a struggle to match the increase in troop numbers with an appropriate number of additional armoured vehicles and drivers trained to operate them, we are then told, with Evans unable to resist writing that Brigadier Kevin Abraham, head of joint capability at the Ministry of Defence responsible for delivering armoured vehicles to Afghanistan, "revealed" that even the previous force of 8,100 was not equipped with the right number of vehicles.

"They will not all be in theatre until the spring of 2010, and the vehicles for the current force of 9,000 will not be delivered until the end of next year, " he says. Well, you don't say!

Through the medium of Evans, we then get to learn that Brigadier Gordon Messenger, commander of 3 Commando Brigade Royal Marines, says that the gap between troop numbers and the armoured vehicles they need to protect them on operations is one of the "constraining factors" facing commanding officers planning missions in Helmand province.

This theme is then developed by Chris Smyth, another journalist on the Times stable, who writes under the heading: "Ainsworth: no more troops in Afghanistan until equipment improves."

Smyth retails parts of the speech from the defence secretary at the Labour party conference in Brighton, where Ainsworth tells delegates that no more troops can be sent to Afghanistan without improvements to equipment. "The UK cannot allow the deployment of troops to outstrip the supply of equipment which allows them to do their job and minimises the risk they face," he says.

Earlier, Ainsworth – in an interview for the BBC Today programme - has pointed out that equipment shortages would be worsened by rushing more troops into theatre. "The kit and equipment they need to do this job doesn’t come from Marks and Spencer. It has to be ordered through a very complex procurement process," he said.

Not only is there the ordering process but, as the Daily Mail points out, using Messenger as its source, introducing new vehicle types produced a major burden of training drivers and mechanics and having them in the right place at forward bases.

This, of course, merely provides a foil for Liam Fox in The Daily Telegraph. Accusing Gordon Brown of "cowardice and incompetence", he declares: "Failing to have enough equipment to allow troops to train on before operations is bad enough. To abandon our Armed Forces in Afghanistan without the equipment they need and deserve for over a year is quite simply staggering."

Yet, the media and Fox are missing the real story – as always they do. Go back to July 2008 and US General John Craddock was then making the point that troops, without the necessary equipment, were of little value. He then observed that the priority was the provision of transport (particularly helicopters and mine-protected vehicles), intelligence and medical capabilities. "Too often," he said, "the forces there now are relatively fixed, because we don't have adequate tactical mobility to move them around to be able to do the jobs we need them to do."

This is something to which we referred in this blog, back in 2008 and also in March 2009 and in many other posts, but the rot started well before.

At its heart is the failure of the Army to predict the change in Taleban tactics from open confrontation to the widespread use of IEDS, and its insistence on high-mobility vehicles such as the Viking and Vector - which are now having to be replaced. On top of that, there has been the farce with the Panther (pictured), the Jackal - which is too often being torn apart by Taleban bombs – and the charade over the Snatch Land Rover.

As a result, it was not until October 2008 that the Army got its act together sufficiently to agree a package of vehicles – some of which are distinctly suspect – which then had to be ordered, built and modified, with the training and infrastructure put in place. Before that, of course, the Army was still hankering after FRES, and resisting the purchase of specialist vehicles, designed for the counterinsurgency environment.

Now, of course, chickens are coming home to roost. Such have been the delays and the wrong turnings that the Army is ill-prepared for the current phase of the conflict, and is not in a position to support any substantial increase in numbers. And, having been so long behind the curve, by the time the new equipment is in place, Taleban tactics will have developed further, and the Army will most likely still be ill-equipped, forever trying to catch up.

Therein lies the real story – one of a sluggish, inflexible military which has been struggling to come to terms with the idea that counter-insurgency requires its own specific set of equipment, and which has delayed its response for so long that its tactical and strategic options are now being closed down. Yet, from the one-dimensional treatment of the story in the media, you would never have guessed.