They lie and deceive 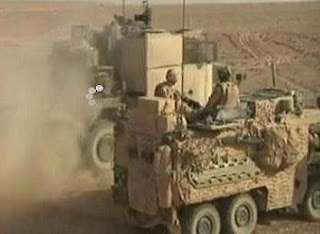 These "killer machines" were supposed to have been withdrawn. We all thought they had been. In fact, we had an announcement in May that the Vector was to be withdrawn from operations in Afghanistan.

Then, on 2 October we learnt that an RAF Regiment gunner had been "killed as a result of an explosion that happened whilst on a force protection patrol near to Camp Bastion."

He was named the next day as Senior Aircraftman Marcin Wojtak, and we were told he had been "killed as a result of an explosion whilst commanding his vehicle." There was, however, no mention of the vehicle type – and nowhere in the contemporary media accounts was the vehicle type mentioned. By keeping quiet, the MoD hoped to get away with it.

We should have known. Despite MoD assurances, we did pick up that the Army was still using Vectors when we got a fleeting glimpse (pictured) of one on an MoD video showing the re-supply convoy to Sangin in late July.

I should have made more of it then, but it could have been a one-off, and the convoy was led by mine-clearance vehicles. Furthermore, it was a "maximum effort", when everything seemed to be in use.

But little did I think that the military could have been so criminally stupid as to issue the vehicles to the RAF Regiment for routine patrols, in view of their extreme vulnerability. But, when it comes to stupidity, this is something in which the military has always excelled.

One can only suppose that they thought that Bastion – which has rarely been attacked – was a "safe" area, neglecting the fundamental principle of asymmetric warfare. There are no "safe" areas – the enemy will always be probing for the weak points and, once again, they found one.

As commander of the vehicle, SAC Wojtak, acting up as a Corporal, would have been in the front passenger seat, and would not have stood a chance. This is only the sixth death in this machine, as a direct result of IEDs or mines, but many more have been seriously injured.

Anyhow, The Daily Telegraph and some others have picked up the identity of the vehicle, reporting that the death of Wojtak raised "new concerns" over the safety of armoured patrol vehicles in Afghanistan.

The greater concern is what the hell is the RAF Regiment playing at? They were supposed to be delivering Panthers to theatre and, although we have no love of that vehicle, it is substantially better than the Vector.

Needless to say, the hapless Ainsworth is in the frame, having to cover up for this particular example of military stupidity – one of the less enviable tasks of a secretary of state – when, privately he is seething, having effectively been deceived about their use.

"Vectors will be on people's minds here," he says, "but what you have got to try to do is give commanders the length and breadth of the Helmand valley the choice so they are never having to use the wrong vehicle for the wrong operation."

The "commanders", the Army and the MoD between them did have the "choice" and once again they have cocked it up. As a result, another good man has died. They are fortunate to have a fall-guy of an unprepossessing secretary of state who is taking the rap this time. But the guilty ones know who they are. They should be ashamed.