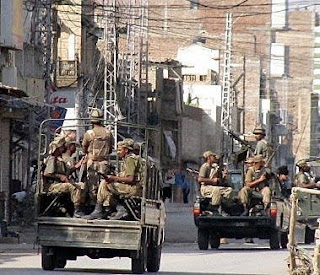 The current offensive Pakistani offensive in the South Waziristan tribal area can be reported on many different levels, the simplest being that projected by some analysts as "the mother of all regional conflicts".

That is one description offered in a remarkable piece in the Asia Times, written by Syed Saleem Shahzad, the Pakistan bureau chief, as a prelude to a long interview with Mohammad Ilyas Kashmiri, styled as an al-Qaeda leader who, according to American intelligence, is al-Qaeda's head of military operations.

Shahzad frames the conflict on the one hand as a Pakistani military operation against the Pakistani Taleban and al-Qaeda and – from the perspective of al-Qaeda – as part of its "game plan" in the South Asian war theatre, a continuation of its "broader campaign against American global hegemony that began with the attacks in the United States of 11 September 2001."

Al-Qaeda's target, we are told, remains the United States and its allies, such as Europe, Israel and India, and it does not envisage diluting this strategy by embracing Muslim resistances on narrow parameters. In this context, militant activity in Pakistan is seen as a complexity rather than as a part of al-Qaeda's strategy.

Complexity or not, al-Qaeda (if that is the correct description) seems committed to defending a territory of approximately 2,550 square miles which has, of the face of it, little strategic value, against Pakistani rather than US forces, risking substantial loss and disruption.

In that area, it is estimated (by the Pakistani Army) that there are about 10,000 "hardcore fighters", mostly members of the region's ethnic Pashtun tribes, augmented by about 1,000 Uzbeks, some al-Qaeda Arabs and even a handful of "militants" from Western countries. There are also said to be factions from other parts of Pakistan in the area, in particular from the south of Punjab province.

The military action now under way follows a spate of what might be termed "terrorist" attacks in the region. These have included an attack on the Indian Embassy in Kabul, when a car loaded with explosives rammed into the compound wall, killing at least 17 people. In Pakistan, there was an "audacious attack" on the Pakistani military headquarters in Rawalpindi, the twin city of the capital, Islamabad. Then, a suicide bomber detonated a bomb in market town in the Swat Valley region, killing 41 people and injuring 45 others.

These attacks, however, have been carried out by a kaleidoscopic mix of different groups which, to the causal follower of the conflict attuned to the idea that this is a Taleban conflict, present a bewildering variety of names. Not least, the Rawalpindi attack might have been carried out by Lashkar I Jhangvi, described as a "vicious Punjab-based sectarian outfit", which may or may not have links with the Taleban and al-Qaeda.

And so it is with the offensive in South Waziristan, where one is presented the Pakistan Tehrik-e-Taliban (PTT), the Lashkar al-Zil or the Shadow Army, another of al-Qaeda's fighting forces, the Islamic Movement of Uzbekistan and, in the charge of Ilyas Kashmiri, the so-called 313 Brigade, a collection of jihadi groups, such as the Harkat-ul Jihad-i-Islami (HUJI), which has fought for many years against India in India-administered Kashmir.

If these are the foreign "players", the diversity of the local Pashtuns is doubtless even greater, with huge variations in the degree of commitment to the fight, the levels of equipment, the experience and the loyalties, both to other tribal groups and to the "cause". Although the Taleban is nominally led by Hakimullah Mahsud, a member of the Mahsud tribe, this is no homogenous "army", trained and equipped as a coherent fighting force, but disparate and fractured groups, each with their own agendas.

On the other side, there is the Pakistani Army, with its own agendas, loyalties and pressures, some domestic and some international, specifically from the United States which is looking to a greater involvement from against the elements holed up in the Afghan border regions.

Possibly, though, the domestic issues have been understated. Pakistan is very far from being a stable state, if indeed it can be called a state at all. One way of describing it is as a Punjab-based military oligarchy, occupying rather than ruling the territories of the domain, maintaining an uneasy and fragile peace by force of arms and brute oppression.

Recruited mainly from the Punjab, but with a significant component of Pashtuns in their ranks, the Army has a history of supporting the Taleban through the Soviet occupation of Afghanistan, and loyalties forged then are still evident.

To what extent, therefore, there is a firm intention to destroy the Taleban, and to what extent this is merely an extension of the historic battle to contain border tribes, or to suppress groups which threaten the Pakistani state, is unknown. What the Pakistani Army declares as its objectives, and what they actually might be, are not necessarily the same things.

A particular issue here is the involvement of India – and it was no accident that the Indian embassy in Kabul was attacked, some say with the tacit (if not actual) support of Pakistan. India's support for the Afghan government is especially vexatious to the Pakistan government, which sees India's efforts as an attempt at encirclement, against which the natural allies of the Pakistanis are the Pashtun-led Taleban.

This dynamic is reinforced by Indian support for dissident groups in Baluchistan and Sindh Province, plus the never-ending dispute over Kashmir, which make for further complexities which are not always fully factored in to the analyses of the regional situation.

Especially relevant is Kashmir, and the involvement of the Pushtan tribes, mainly the Mahsuds who raised a tribal lashkar and invaded the briefly independent Kashmiri state after the British had withdrawn, leading its ruler, the Maharaja of Kashmir to call for Indian military assistance.

Following the first Indo-Pakistan war, with the Pashtun irregulars fighting alongside the newly-formed Pakistani Army, the outcome was that nearly 40 percent of the province is now under Pakistani control (the rest now split between India and China), with the India occupation hotly contested by Pakistan, which is supporting a separatist movement.

That movement is also heavily supported by Afghan mujahideen and by an increasing number of foreign fighters. Thus, a regional dispute has morphed into part of what is termed the "pan-Islamic global struggle" with al-Qaeda having established a wing in Kashmir.

We thus have Ilyas Kashmiri's 313 Brigade from Kashmir moving to support the dissident Mahsuds in Waziristan (effectively renewing the 1947 alliance), in what might appear to be the anomalous situation of their fighting against their historic ally, the Pakistani Army. Concurrently we see Pakistani troops being withdrawn from the Indo-Kashmiri border to take part in the operation in Waziristan, fighting against the forces they have formerly supported and are now opposing.

The point, of course, is that thus is indeed a highly complex situation, with local, regional and indeed global influences at play, some in seeming contradiction, the combination of which defy easy – or any – analysis.

And, at the edge of this power play, we have coalition forces in Afghanistan, who may or may not benefit from the suppression of dissident forces in Waziristan, if the Pakistani Army is successful. Alternatively, we may see massive displacement of undefeated fighters into Afghanistan, adding to the rebellion there, the strength of which is even now unknown, and about which there is no agreement. 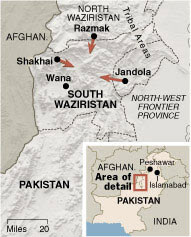 Mohammad Ilyas Kashmiri, however, was at pains to tell the Asia Times that the aim of the current battle is "to bring the world's biggest Satan [US] and its allies into this trap and swamp [Afghanistan]." Afghanistan, he says, "is a unique place in the world where the hunter has all sorts of traps to choose from."

NATO does not have any significance or relevance, he adds. They have lost the war in Afghanistan. As a military commander, he told the Asian times, "the reality is that the trap of Afghanistan is successful and the basic military targets on the ground have been achieved." But his ultimate target is "to chop off American strength". His fight, he says, "was never the Pakistan army that was against me, but certain elements who branded me as an enemy to cover up their weaknesses and to appease their masters."

And so does the "game" play out – a man branded as a terrorist, leading fighters against an army he does not consider his enemy, embarking on a battle to the death, in a territory where his real enemy holds no sway, with an outcome which is as yet uncertain and which may resolve nothing.

It has been said of Irish politics, that if you think you understand what is going on, you haven't been listening. If anybody thinks they know what is going on in this region, they need a very powerful hearing aid.