The limits of power 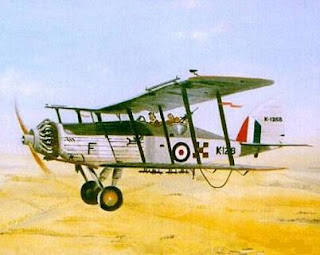 "The war to end Pakistan's woes?" is the offering from Mustafa Qadri, one of the many commentaries on the current Pakistani expedition into South Waziristan.

"Still the question remains, once the guns have been silenced will Pakistan take steps to cleanse the tribal areas of the extremist poison?" Qadri asks. In so doing, he posits a suggestion that has become current, that the Pakistan government should move in, once and for all, take control of the tribal regions and fully integrate them with the rest of the country.

The idea of a "war to end wars" is certainly being promulgated by the Pakistanis, their prime minister, Yousuf Raza Gilani, claiming that the army is poised to deliver a "decisive blow" against the "Islamist insurgents".

History, however, should tell us that this rugged land is never going to be subdued, and certainly not by the relatively modest force at the disposal of the Pakistani government, a mere 30,000 or so being one of the smaller "armies" that have sought to subdue even a fraction of the territory being currently assailed.

What, in effect, the Pakistanis are attempting – or being expected – to do is revisit the "Forward Policy " adopted by the British in 1849, one of active intervention in the region with an aim permanently of subduing the warring tribes.

This resulted in a series of costly military expeditions which met with very little success, leading to a more laissez faire revision, known as the "Close Border system" – one of containment, where the tribes were bribed to secure their good behaviour, and punished by punitive expeditions when they caused trouble – a policy known by its critics as "Butcher and Bolt", so-called because there was no attempt to maintain a permanent military presence.

By the mid-1890s, in a virtual replication of current event, a strategic debate was raging about the best line to take, summed up in a contemporary book written by H Woosnam Mills. On the one hand, he wrote, was the "masterly inactivity" party, which maintained:

Is it wise to deprive tribes of the independence which they value above all things and to impose an authority which can only be maintained by a large addition both in men and money? Their rugged country is of no strategic value to us ... is it expedient to advance from India on Central Asia and so increase our responsibilities?

On the other, there was the interventionist faction, which upheld the then existing policy. "What we are doing on the North-West Frontier is necessary," they said. "Anarchy and civilisation cannot march peacefully side by side. We are establishing our civilising influence gradually all along the Afghan border, and both from strategic reasons and to prevent our territory from being raided we are bound to continue in the course now taken."

The immediate debate was resolved – effectively as it is now – by a massive uprising of the Pathan tribes in 1897, with "the entire frontier line ablaze with armed men". It was of that period that Mills wrote, in respect of one of the tribes, the Mamunds, who had been left alone by British troops during an earlier campaign, "although they did much to merit severe punishment"

... they simply joined in the present disturbances from that pure love of a fight which is second nature to the Pathan and becomes additionally attractive when the feringhee or infidel foe is the objective.

These tribesmen, it should be remembered, are all Muhammadans and fanatical in their faith and hatred of the infidel. Excepting in Baluchistan our government has never succeeded in taming them and to-day they are almost as irreconcilable as when we first mixed in frontier matters.

And, continued Mills, of the general uprising, with ominous implications for "hearts and minds":

... tribes with whom we had no possible quarrel, and whom we have treated with the greatest possible deference were among those who joined in the revolt.

At great cost, this revolt was suppressed – and only after savage fighting – but the Mashud tribe – focus of the current Pakistani action - was again in revolt in the summer of 1917 while British forces were otherwise engaged fighting in the First World War. This, however, was but a prelude to a further uprising by the Wazirs and the Mahsuds who in November 1919 launched a series of large scale raids in the administered areas, killing over 200 people and wounding a further 200.

Notably, in the subsequent British campaign, aircraft – having first been used in 1917 - were used on a number of occasions to suppress the tribesmen. Supplementing the ground war, the RAF systematically bombed Mahsud villages, actions which were claimed to have been instrumental in "temporarily subduing the Mahsuds".

However, it is also recorded that the RAF was surprised not only by how quickly the Mahsud tribesmen adapted to aerial attacks, but by the effectiveness of their rifle fire against the low-flying aircraft. One flying officer wrote that "their rifle fire … was uncomfortably like that of a machine-gun, and almost as effective."

Nevertheless, when the Wana Wazirs rose up in November 1920, driving out Brtish forces, they appealed for help from the Mahsuds, but still recovering from their earlier defeat, no support was forthcoming and the Wazir opposition faded away. On 22 December 1920, Wana was re-occupied.

From there, the RAF developed their doctrine of "air control", refined and honed in Iraq in 1921, when the principles were established as:

One objective must be selected–preferably the most inaccessible village of the most prominent tribe which it is desired to punish. All available aircraft must be collected at a base from which they can function with all their maintenance and repair facilities at hand. The attack with bombs and machine guns must be relentless and unremitting and carried on continuously by day and night, on houses, inhabitants, crops and cattle…. The objective may be changed if it does not spread quickly enough…. This sounds brutal, but it must be made brutal to start with. The threat alone in the future will prove officious if the lesson is once properly learnt.

This early use of airpower led to one of the most remarkable campaigns in the the Northwest Frontier, standing as the first (and only) time in history when air power alone was used to put down a rebellion. 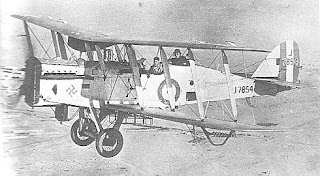 Known as Pink's War after Wing Commander RCM Pink who commanded the operation which started on 9 March 1925 , Bristol Fighters and de Havilland DH9s from 5, 27 and 60 squadrons were deployed to the airstrips at Miranshah and Tank systematically to bomb and strafe mountain strongholds. So successful was the tactic that, on 1 May 1925, the tribal leaders sought an "honourable peace" bringing the short campaign to a close with the loss of just 2 men.

The action firmly entrenched the use of air power as a major weapon in controlling tribesmen in the frontier regions and, in September 1937, 5 and 20 Squadrons were again conducting operations in North Waziristan, this time in Westland Wapitis (pictured), flying 333 operational hours with four aircraft in eight weeks.

Between February 1941 and June 1943, it was the turn of Squadrons of the Indian Air Force, flying antiquated Lysanders (pictured), in a fully fledged combat role against the tribes in Waziristan. Offensive operations started on 1 May 1942 onwards, against the Faqir of Ipi's tribal warriors in what came to be known as the Datta Khel Operations. 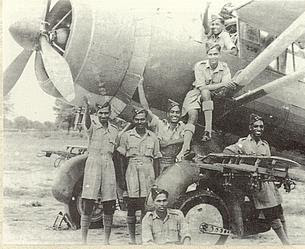 By then, it appears, even the pilots of the Squadron were sceptical of the effectiveness of their sorties. During a temporary lull in the operations, one was instructed to receive and entertain to tea one of the tribal leaders and his entourage. The tribal leader, he said, appeared very confident and did not appear to be cowed downed by our air attacks. In fact he invited one of the young fresh looking pilots to his village.

However, on 21 May, the Lysanders beat back a major attack on a patrol at Miranshah, dropping 66 bombs, followed by 54 more two days later. On the 27th, a major action occurred when the 500-600 tribesmen besieged Datta Khel. Aircraft from Nos. 3, 4 and 28 (RAF) Squadrons attacked the tribesmen.

The dangers of the proscription sorties in the frontier were illustrated that day when a Lysander from No.28 Squadron force landed in the battle area and both the crew members were lynched by the frontiersmen, their bodies being recovered the next day by a ground party. On that day No.4 Squadron flew twelve sorties.

The Datta Khel sorties lasted till 19 August. Every day, aircraft from the Indian and RAF squadrons relentlessly flew sorties to attack the tribals. In the final reckoning, the detachment of No.4 Squadron at Miranshah flew over 170 hours in support missions in this short period.

In a lament that would be recognisable The Sun of today, it was noted that "the serviceability of the Lysanders was not good. There was a shortage of tyres for the Lysanders and No.4 Squadron was forced to improvise by using borrowed Audax tyres. 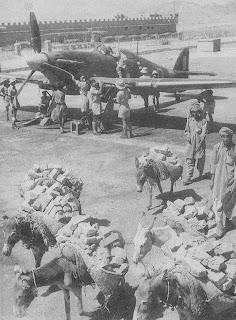 There were other technical problems as well. The bomb racks and stub wings used by the Lysanders were liable to fracture at root, and sometimes the 20lb bombs would fall off in a hard landing. The Station Commander complained that Lysander spares were very difficult to procure and that the aircraft was reaching "the end of its tether in India". Nevertheless, No.4 would continue to operate this aircraft for another nine months.

Eventually, the ageing Lysanders were replaced with Hurricanes and then Tempests, these then being operated from 1947 onwards by the newly formed Pakistani Air Force, which adopted an operational pattern very similar to that of the RAF and the IAF.

Now, over 60 years later, it is newly supplied F-16s of the Pakistani Air Force which are pounding tribesmen in Waziristan, augmented by helicopter gunships.

The technology may be more advanced, but the tactics would have been recognisable to the airmen of 1917 – not far short of a hundred years ago. And while Wing Commander Pink's sorties in 1925 may have been temporarily successful, there are no indications that airpower now is any more decisive than it was then. Similarly though, there are very real fears that the Pakistan government is playing with fire.

Says Roedad Khan, a former federal secretary of the Pakistani government, "We must also recognize the limitations of modern, high technology, military equipment in confronting highly motivated guerrilla movement in a treacherous terrain."

He adds that "We must also recognize that the consequences of large-scale military operations – against our own people – particularly in this age of highly sophisticated and destructive weapons – are inherently difficult to predict and control. Therefore, they must be avoided, excepting only when our nation's security is clearly and directly threatened. These are the lessons of history. Pray God we learn them."

Back in the early 1900s, a crusty British general, Andrew Skeen, wrote a guide to military operations in Waziristan. His first piece of advice: "When planning a military expedition into Pashtun tribal areas, the first thing you must plan is your retreat. All expeditions into this area sooner or later end in retreat under fire". It took us a century to understand the limits of our own power. It looks as if those same lessons are being re-learned.

Thus does Khan conclude by citing George Bernard Shaw, who said: "We learn from history that we learn nothing from history."