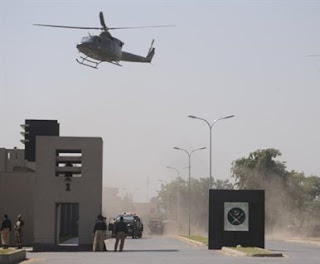 A serious topic of conversation in Indian political circles is the very real possibility of Pakistan breaking up, the tenor of the discussion being not "if" but "when".

If it happens, it is felt that a key element will have been the proliferation of Taleban groups beyond the Northwest Frontier Province (NWFP) and into the Pakistani heartland. This issue is discussed in a recent edition of the Hindustan Times, where it was noted that the attack on Pakistan Army Headquarters on 10 October, as well as other recent suicide bombings in Lahore and Islamabad, involved two Punjabi "militants", Commander Iqbal and Gul Muhammad.

Crucially though, the attacks have been mounted by a new organisation, which goes under the name of Tehrik-e-Taliban Punjab. Until fairly recently, "Taliban" was a word associated with Pashtuns, with two groups commonly acknowledged, the "Afghan" and the "Pakistan" (TTP) wings, both operating out of the northwest frontier province.

Recently, we noted the emergence of another Taliban group, the Tehrik-e-Taliban Balochistan (TTB), operating in southern Helmand against US troops, although it is believed also to be active in the Quetta district, in Pakistani territory. This now makes four, identifiable Taliban groups, two of which have non-Pashtun memberships.

What are now called "militant" groups are, of course, by no means new to Punjab, the environment having spawned the increasingly familiar alphabet soup of activists, such as the Jaish-e-Mohammad (JeM), Lashkar-e-Jhangvi (LeJ), Sipah-e-Sahaba Pakistan (SSP) and the Harkatul Jihadul Islami (HUJI). These all have a history of involvement in Afghanistan, alongside the Lashkar-e-Tayyeba (LeT), with the tacit support of elements of the ISI. Some of the groups, and especially LeT, had a history of activism in Kashmir.

What is different about the new grouping though is that it seems to have formalised links with the TTP, expending its energies on attacks inside the Pakistani heartland, either as solo operations, or providing logistic support and personnel for TTP-initiated attacks.

One of the core groups of the Punjabi Taliban is thought to be the Lashkar-e-Jhangvi (LeJ). Says Rohan Gunaratne, author of Inside al Qaeda, many Jhangvi fighters have moved to the NWFP. "Jhangvi is now the eyes, ears and operational arm of al Qaeda and the Tehreek-e-Taliban Pakistan [based in Waziristan]," says Gunaratne. "It is hard to distinguish between the three."

The focus of the new activism is the Pakistan Army, which is seen to be "siding with the forces of the infidel" in its operations in the tribal areas, and has thus become a "legitimate" target.

Once again, we see the coalition intervention in Afghanistan, and the pressure on the Pakistan government to take action against the sanctuaries in the frontier area, having a perverse effect. More and more of the resources of its security forces are expended on internal security, rather than against activists operating in Afghanistan.

The main recruitment area for the Punjabi Taliban is said to be South Punjab, in what is known as the Seraiki belt, where rising poverty levels have helped turn the area into a fertile breeding ground for militant outfits. The call to arms is aided by a massive rise in the number of Punjab madrassas, from 1,320 in 1988 to 3,153 in 2000, a rise of almost 140 percent. Many are said to be Saudi funded.

A more detailed analysis suggests that the growing power of the Punjabi Taliban poses a serious threat, providing fresh recruits for the jihad from a population of approximately 27 million.

Once indoctrinated at the madrassas, students from Punjab are being taken to the terrorist training camps in the country's Pashtun tribal belt. Over five thousand youngsters have reportedly moved to South and North Waziristan. Once they completed their military training, these youngsters eventually proved themselves to be valuable partners for the TTP, providing valuable local knowledge of the important urban centres of Punjab, such as Lahore, Rawalpindi and Islamabad.

However, despite the acquisition of the new name, it is believed that the Punjabi Taliban lacks any organisation or command structure and still operates as a loose network of elements comprising its former elements. The attraction of working under the Taliban franchise, apparently, is that it gives activists the freedom to work outside the control of the more established groups, some of which are reluctant to support attacks within Pakistan.

Further, as "free-lancers" they have been welcomed by Mullah Omar, leader of the Quetta Shura "Afghan" Taliban group, having previously rejected alliances for the jihad groups of which they were members. Based within the tribal areas, therefore, the "Punjabi" Taliban comprise an autonomous group, not answerable to their leaders in the Punjab.

There also seems to be a linkage between these recruits and the 313 Brigade led by Ilyas Kashmiri, which has moved from Kashmir to support the dissident Mahsuds in South Waziristan.

Thus, in effect, we have a four-way nexus of Pashtun activists from Afghanistan and Pakistan, reinforced by Punjabis and Kashmiri, all linked with al Qaeda, which – according to Small Wars Journal - is providing training and helping to co-ordinate attacks, both inside Paskistan and in Afghanistan.

With these developments, one [unnamed] Pakistani analyst warns that if the Taliban now spread their tentacles across Punjab, "this would change the battlefield completely." The prospect of a collapse of the Pakistani government might be that much closer. And, while Indian commentators are avidly discussing the possibility, none of them are prepared with any confidence to predict the results.