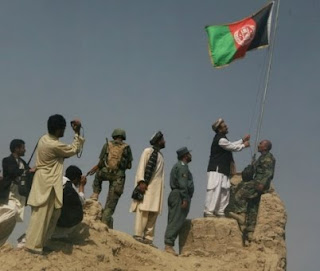 An article in The Sunday Times by the peripatetic Stephen Grey gives much food for thought, and some considerable cause for alarm.

Grey is back in Afghanistan, not in Musa Qala where he was last time, but much further south with the US Marines in Khan Neshin, sometimes called Khanashin. The town, if it can be called that, is a ramshackle linear development, set back from the lower reaches of the Helmand River, in what is locally known as the "fish hook", a curve in the river as it arches west towards Iran, eventually to disappear in the salt marshes of Seistan and lake Hamun.

And Khan Neshin, according to Grey, is giving the US Marine problems, so much so that his article is entitled "Morale dips for American marines in Afghanistan", with the strap telling us that "troops are dismayed by the ambivalence of locals and a sense that the Taliban can outlast them."

The town was occupied in July 2009, as part of the US operation Khanjar (Strike of the Sword), when Marines from the 2nd Light Armored Reconnaissance Battalion established the first sustained presence of coalition forces – the furthest south coalition forces have so far ventured. It has since become a test-bed for McChrystal's "take-hold-build" policy.

However, despite the Marines' good intentions, Stephen Grey reports that the local tribal chief, in a recent meeting, was openly hostile. "The Americans threaten our economy and take our land for bases. They promise much and deliver nothing," he said.

The chief goes by the name of Haji Khan, a man "who rules like a medieval baron". He adds: "People here regard the American troops as occupiers," then telling the Americans that: "Young people are turning against them and in time will fight them."

There is already significant fighting in the area which – on the face of it – could be attributed to Pashtuns coming into the area, either up from Pakistan in the south, or from other areas of Afghanistan.

The platoon left to hold the ground knows there are at least 20 booby-trapped IEDs on the high ground around their base. More than half the men have already been caught in blasts. One marine explosive expert was killed; others suffered broken legs and amputated feet. Three have survived two explosions and come back to fight again.

Furthermore, Grey reports that villagers "are rarely willing to express a simple opinion, let alone inform soldiers where the enemy is hiding." One marine described the way the Taleban blended with the population as "unbelievably frustrating".

That much is par for the course, in this long-running battle against the Taleban but what has the alarm bells ringing is that Haji Khan and his tribe are not Pashtuns, who form the backbone of the insurgency, but Baluchi. They are a different ethnic group, of which one million live in the part of the Khanate of Baluchistan which was annexed by Afghanistan – and whom comprise at least 60 percent of the population of Khan Neshin.

And, according to US military sources, most of the Taleban they have been fighting in Khan Neshin are most definitely Baluchi. When one Baluchi Taleban leader was killed as he was plotting a major conventional attack, his elimination dramatically improved security in the area.

This is an important development. Historically, the Taleban have been almost entirely Pashtun, drawn mainly from the second largest tribal group, the Ghazai, their "insurgency" essentially amounting to a Pashtun nationalist uprising. Previously, the Baluchi have been no part of it, and nor have they had reason to be.

They, themselves – or, at least, elements – have been fighting their own liberation campaign against the annexation of the main part of their territory by Pakistan in 1948, which drove thousands of refugees into Afghanistan in the '70s. Caught up in the Soviet invasion, they were attacked by the Mujahideen, driven - it has been claimed - by the Pakistani ISI, which was then supporting the anti-Soviet resistance.

Nevertheless, the Baluchi independence campaign has continued, with signs of it strengthening, gaining increasing popular support. There is also a guerrilla force actively conducting operations since 2003, hitting infrastructure and paralysing the ability of the central authorities to take advantage of Balochistan's rich mineral resources.

This has put the Baluchis at odds with the Pakistan government, especially as some of the independence groups are rumoured to be supported by India, issues we rehearsed in an earlier piece. This has prompted the Pakistani government to exploit historical Pushtun-Baluch rivalries, also using its "proxy" Taleban forces, in the classic "divide and rule" ploy.

On the other hand, there has been much turmoil within the Baluchi community itself. Unlike the Pashtuns, the Baluchi society is stratified and has been characterised as "feudal militarism," the tribal groups being led by sadars (chiefs), with far more power than their Pashtun equivalents. But the Pakistani Balouchi sadars have been condemned for being far too close to Pervez Musharraf and less interested in supporting independence for their people.

With population movements, the disruption from the wars and an accelerating pace of social change, there has emerged a large body of "disaffected youth", rebelling against the traditional order, drawn towards the independence movement.

In a development that is not seen as a coincidence, earlier this year there emerged news of a newly formed Baluchi-Taleban alliance called the Tehrik-e-Taliban Balochistan (TTB).

According to some Baluchi activists, this has been created by the ISI, to soak up the youth faction, enjoining young Baluchis to reject "tribalism and narrow nationalism" – the latter supported by India, against the interests of the Muslim "brotherhood" - and to think "for Pakistan and broader Muslim Ummah."

Whether this is true or not, there is now good evidence that the Taleban is widening its appeal, and recruiting factions outside its traditional Pashtun constituency.

There may also be another layer to the alliance, as the Baluchi are heavily involved in the opium industry, both as growers and traders. Baluchistan is said to be at the crossroads of Afghan opiates trafficking, but it is also a major supply route for the Taleban. Haji Khan, the chief in Khan Neshin, is also an opium grower and the military believes him to have a "working relationship with the Taleban".

Into this complex mix, there are also claims of another element, with the recruitment of Iranian Baluchis to the jihadist cause, supportive of the Taleban. This may be an al Qaeda initiative, although details are sketchy. But even a hint of the Taleban taking on a wider international dimension is of some concern.

This brings us back to our previous piece, which also explored concerns about the transformation of the Taleban from a local insurgency to a part of the global jihad, with a wider international dimension, through al Qaeda and leaders such as Haqqani, who have their own cross-border links.

Although this has not emerged suddenly, the Afghan insurgency is now looking considerably more complicated and dangerous than it looked even a few weeks ago. The strategic implications are profound.