Lock up your Mullahs 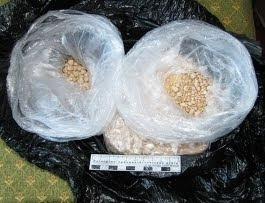 The art of analysis is collecting disparate strands of information, pulling them together and drawing from them conclusions which may not be apparent from any one source, however good that might be.

Leaping into the frame is an outwardly anodyne piece from the Russian RIA Novosti agency, but which adds a couple of invaluable "nuggets" to our growing collection, confirming and clarifying two important aspects of the situation in Afghanistan.

The first is about the opium/heroin trade, which builds on some of our recent pieces, particularly this one where we looked at how the structure of the drugs industry was changing in Afghanistan. Growing is moving down to the fertile south, where productivity has increased from 10kg/ha to 56kg/ha (at best), while the traditional growing areas in the north have given up low-value cultivation and moved into "added value" processing, as well as the lucrative export trade.

This, of course, makes a mockery of the pretensions and "hype" from the UN and other bodies about clearing areas of poppy growing. What has been happening is that the industry is restructuring of its own accord, with the north adapting to the competitive pressure from more productive southern growers.

What Novosti now tells us confirms that which we have been asserting for some time – that this "added value" business has very little to do with the "Taleban", and most likely contributes very little to its coffers (a point which is gaining some currency).

We thus learn from this source that the processing sector is largely controlled by the Northern Alliance, which accounts for 90 percent of the heroin consumed in Russia and the vast majority sent to Europe. The most modern and the best equipped laboratories are located in the northern provinces of Afghanistan near the Tajik, Turkmen and Uzbek borders, which are its areas of influence.

The route is then up into these former Soviet republics, where – as we recorded in our earlier piece (link above) – it is traded for weapons which are then taken south and sold to local fighters.

What complicates matters, says Viktor Ivanov, director of the Russian Federal Drugs Control Service, is that the US used the Northern Alliance forces in the fight against the Taleban, and is still supporting. Unwittingly, in their attempts to control the rebellion in the south, the US (and undoubtedly other nations) are assisting the "drug barons", but the real (drugs) threat comes from them, not the Taleban. "The coalition forces are not conducting an effective fight against them," adds Ivanov.

As to the Taleban, Ivanov raises the second point of very great interest. He describes the Taleban as "a religious component in Afghan society, which consolidates various forces to combat a foreign invasion". It does not pose a direct threat to Russia.

This "nugget" melds with our previous piece, in which a comparison is drawn between the Pashtun uprisings of over a hundred years ago, and the current situation. What we see now carrying the "brand name" of "Taleban" were then exactly the same sort of people as they were then – a loose network of Mullahs, acting to protect their own power and interests.

They are, in effect, doing exactly that which they have been doing for centuries, agitating and organising local populations, capitalising on their inherent distrust of "infidel foreign invaders", in order to mount an opposition against them.

This may seem at odds with the view of NYT reporter David Rohde, who recently spent seven months as a captive of the "Taleban". His experiences, expanded in the Christian Science Monitor, have convinced him that many Taleban fighters and commanders are deeply intertwined with al Qaeda and its vision of global jihad, so much so that they must be considered inseparable.

That view certainly contradicts the model being promulgated by McChrystal and many strategic theorists, who argue that, as with Iraq and the "Sunni Awakening", the local fighters can be peeled away from al Qaeda, leaving this group exposed and allowing it to be defeated in detail.

However, a factor in many of the major Pasthun uprisings down the ages has always been the presence of "foreign agitators", preaching distorted versions of Islam, seeking to provoke a global jihad against the current occupying power. Whether they are "Mullahs," "Sahibzadas," "Akhundzadas," "Fakirs," or one of the host of wandering Talib-ul-ilms, wrote Churchill, the largely illiterate tribal populations, prey to "miserable superstitions", are exposed to "the rapacity and tyranny of a numerous priesthood."

In 1898, it was the "Mad Mullah" Saidullah, who declared a global jihad against the Queen Empress and the British Empire. In 1938, it was the Fakir of Ipi, with similar ambitions. And in 2001, it was Osama bin Laden and, with him currently, Mullah Omar of Quetta Shura fame, plus other members of the rapacious and tyrannical "priesthood", some of whom are affiliated to the will o' the wisp al Qaeda.

The response, in the past, has been to defeat the uprisings, by punitive expeditions, and by bribing the cooperative and peaceful tribes – tactics which buy temporary peace until the next demagogue emerges, when the whole cycle starts all over again.

Longer term, the answer has to be a combination of prosperity and, especially, secular education – it was that, after all which broke the power of the Catholic Church in backward Ireland, which for nearly a century maintained a monopoly over university education. Not for nothing, therefore, do the local Mullahs, invoking the "Taleban" brand, target schools and, where they can, the universities.

These issues we must explore in future posts but, for the time being, with what we have from Novosti, we can veer towards two tentative conclusions. Firstly, opium/heroin control is irrelevant to the battle against the Taleban, while efforts to control the Taleban are making the drug problem worse.

Secondly, the presence and/or influence of al Qaeda does not seem to be the issue in Afghanistan. The real problems are the local Mullahs and their grip on an illiterate and superstitious population. In the name of Islam, they create their havoc. Break their power and the rebellions fade away. In the name of Islam, the population will have to be told to "lock up your Mullahs".

We could, incidentally, start that process in the UK.