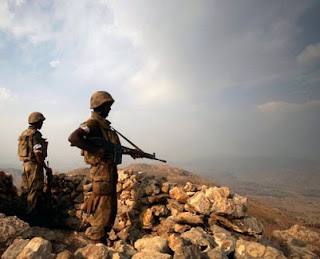 After three weeks of media exclusion, the Pakistani Army lifted a corner of the veil on Thursday, flying in a group of journalists to a barren hilltop in deepest South Waziristan, to explain how swimmingly well the campaign was going.

It was duly rewarded with favourable headlines, such as is in The Guardian, which carried title, "Pakistan hails progress in Waziristan", slightly marred by the addition: "But will it stop the suicide bombers?"

The answer to the question is, of course, "no" – not if the bombings are being carried out by the Punjab Taleban, which can rely on resources based in Punjab province, without having to call for assistance from South Waziristan.

More to the point, since "militant" groups in North Waziristan seem also implicated in attacks in Pakistan proper, the Pakistani Army's venture deep into the southern agency is likely to have little overall effect. Nor indeed is the ponderous progress of the Army calculated to achieve anything lasting.

Much has been made of the discovery of a stack of passports and photos said to belong to foreign militants, and in particular the German passport that appears to have belonged to Said Bahaji, a member of the Hamburg cell that orchestrated the 9/11 attacks. Another passport belonged to Raquel Burgos Garcia, a Spaniard who had converted to Islam and later joined al-Qaeda as a low-level operative.

If genuine, says Time magazine, the passports would confirm what the US has been saying all along: "that Pakistan's wild borderlands have served as a sanctuary for global jihadis who may be plotting fresh attacks on the West."

This may well have been what Hillary Clinton had in mind on her visit to Pakistan, when she rounded on her hosts, telling them: "al-Qaida has had safe haven in Pakistan since 2002," adding, "I find it hard to believe that nobody in your government knows where they are and couldn't get them if they really wanted to."

In that precise context, for all its deliberately optimistic progress reports about its operations in South Waziristan, the number of "militants" claimed killed by the Pakistani Army is remarkably low – especially for a three-pronged advance which is supposedly aimed at entrapping the fighters.

Bearing in mind that the Army managed to recover only the passports of Said Bahaji and Raquel Burgos, and not the persons themselves – dead or alive – one can only imagine that the deliberate pace of the operation is affording al-Qaeda, and indeed any "militant" who chooses not stand and fight, plenty of opportunities to escape.

There is much to be said, therefore, for the supposition that the fighters are simply being allowed to disperse, one fortified by reports that jihadists have been seen shaving off their beards and melting into the civilian population.

Some, if not many, will of course seek sanctuary over the border in Afghanistan, where the Pakistani Army cannot follow. This would suggest that, to ensure the maximum effect, coalition forces should be in place to block the escapees, providing the anvil for the Pakistani "hammer".

Not a few eyebrows have been raised in the Asian press, therefore, with some distinctly critical comments over the US decision to withdraw its forces from its four key bases in Nuristan, on the border with Pakistan, leaving the northeastern province as a safe haven for the Taliban.

Nuristan is strategically located in the Hindu Kush, and is now said to be under the effective control of the network belonging to Qari Ziaur Rahman, a Taliban commander with strong ties to Bin Laden. This makes Nuristan the first Afghan province to be controlled by a network inspired by al-Qaeda. It also opens the US to exactly the same criticism levelled at Clinton – that the US doesn't really want to get al-Qaeda either.

With so many nuances to the situation – with different agendas, hidden and declared – one can only wonder at the naivety of The Times in London, which offers a leader declaring: "Pakistan has taken a brave and correct stance in the battle in south Waziristan. It deserves the support and help of Western governments." Thus does the paper opine:

The Government and military forces in Pakistan merit support and gratitude for their actions, which are hugely advancing the security and peace not just of their own citizens but also those in Britain, in the United States and, indeed, anywhere — Bali, Mumbai — that lives by values other than those of apocalyptic Islamism.

By contrast, only recently, we had the New YorkTimes reporting: "Pressure From US Strains Relations With Pakistan," pointing out that which has been evident for some time, that the Obama administration has been putting pressure on Pakistan to take action, employing a combination of threats and bribes, the latter having a powerful effect on a cash-strapped country.

There are more than a few indications thus that the Pakistani government is going through the motions, doing enough to look credible but, in fact, achieving nothing of any lasting significance – more so in the absence of coordinated US military action on the other side of the border.

As to "hugely advancing the security and peace ... ", the only noticeable effect has been to brand the Pakistani government in the eyes of the extremists as a stooge of the Great Satan. This has made it a legitimate target for terrorist attacks, the results of which are creating rising instability in the country, a process which may get worse as new groups emerge to fight on this newly created front.

Heedless of this, however, The Times goes on to argue that Western governments "should extend strong diplomatic support to Pakistan's Government", but then complains of its "misguided" and "confrontational" stance with India which, for too long, they regarded as the principal battle.

What this neglects is that, whatever the historical overtones, Pakistan's stance is not illogical, and neither is India a passive, innocent party in the relationship. Some of its activities have been distinctly hostile to Pakistan and its pursuit of "strategic depth" in Afghanistan and Iran is, to say the least, provocative.

Any longer-term solution in this crisis-strewn region, therefore, is going to require the active participation of India, and central to the enmity between the two nations is the running sore of Kashmir, which seems no closer to resolution than it was in 1947, in which India is by no means playing a straight hand.

And, with both sides maintaining huge armed forces ranged in opposition to each other, not only does this impose huge financial burdens on the parties, it hampers economic development in the contested areas, and hinders regional cooperation on a wide range of matters, to the detriment of both.

When it comes to such hard issues, though, the "diplomatic support" goes AWOL. The otherwise forthright Mrs Clinton sidestepped the issue, merely observing: "It is clearly in Pakistan's and India's interest to resolve ... But it isn't for us to dictate a solution. That wouldn't last a minute."

As for the European Union, only yesterday it was telling us that it wanted to become "more capable, more coherent and more strategic as a global actor, including in its relations with strategic partners, in its neighbourhood and in conflict-affected areas."

This was the European Council in Brussels yet, when it came to is declaration on Afghanistan and Pakistan, all it could manage was weakly to tell the world that it: "shares the concern about the deteriorating security situation in Pakistan and supports the government of Pakistan in its efforts to establish control over all areas of the country."

If the EU is unutterably weak though, British foreign secretary David Miliband is not much better. His last substantive utterance on the issue was in January of this year on a visit to India, when he made the eminently sensible observation that: "Resolution of the dispute over Kashmir would help deny extremists in the region one of their main calls to arms and allow Pakistani authorities to focus more effectively on tackling the threat on their western borders."

Such was the hostile reaction of self-interested Indian politicians to this home truth though, that Miliband's intervention was widely branded as a "gaffe". He has maintained a monastic silence on the subject ever since.

Nevertheless, as this commentary makes clear, Kashmir occupies a pivotal role in the stabilisation of the region. Yet, while the pressure is on Pakistan to put its house in order, India is getting a free ride, despite being a major player and a vital part of any overall settlement.

One does not, therefore have to take sides in the dispute to observe that it is not only Pakistan which is playing games. If there is a sense of grievance at the way it is being treated by the West, this is not altogether unwarranted. A commitment by Pakistan is one thing, but a similar level of commitment is needed from the other parties – and there is no evidence that this is forthcoming.

If, instead, the West chooses to play games, we should not be surprised if Pakistan does the same.