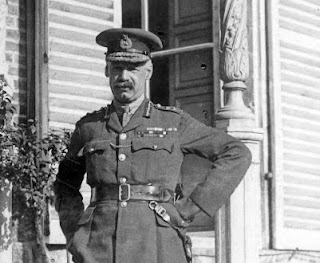 It says something for the media – and the general commentariat - that, years after we have been ploughing the solitary furrow, pointing out that the military should bear some of the blame for the current parlous state of our Armed Forces, and their lacklustre performance in first Iraq and now Afghanistan, only now does The Spectator pop up with an article headed: "The generals must share the blame".

The piece is written by Paul Robinson is a professor in the Graduate School of International Affairs at the University of Ottawa. Giving the Spectator the comfort blanket it needs, Robinson has also been a military intelligence officer in both the British army, as a regular officer, and the Canadian forces, as a reservist. Thus, he has the right credentials to say the words and get a hearing.

Says Robinson, while it is fashionable for the military top brass to attack politicians when things go wrong, many of the army's problems are of their own making. This, of course, we have said many times, with a particularly trenchant piece in April 2009, when we described the military, as currently constituted, as "a deeply dysfunctional organisation, not least evidenced by its state of denial over its performance in Iraq."

But while this blog has been a voice in the wilderness, alternately attacked and ignored, the professor is allowed to note that, while in recent years, failure to "support the troops" has become the ultimate political sin, reminding us that the Conservatives' soon-to-be defence adviser, Gen Dannatt, blasted Brown a few weeks ago, letting it slip that his brave plea for 2,000 extra troops had been ignored by our callous PM.

But, he asks, has Gordon Brown really "betrayed" the troops in the field? A good degree of cynicism is in order, he asserts, then coming up with an interesting thesis of his own.

In reality, Robinson says, both as chancellor and as prime minister, Mr Brown has given Britain’s armed forces a lease of life which they had no reason to expect, while the country's military leaders, including and especially Dannatt, must share the blame for the difficulties their troops have faced in both Afghanistan and Iraq.

Of course, while it is fashionable for the general to attack politicians, it is deeply unfashionable even to think of blaming soldiers for anything. But a McGonagall-like desire to help the ordinary serviceman or woman on the front line, says Robinson, should not serve as cover for the senior officers who lead them.

Nor, he says, should it prevent us from criticising the institutional culture in which they serve. One element of this culture is that professional soldiers tend to look at themselves as part of a select order, upholding the highest moral and professional standards, while seeing politicians as self-serving hypocrites. He adds:

As a result, when things go wrong, the natural tendency of many in uniform, especially the generals, is to blame the politicians rather than to look in the mirror. The combination of this self-satisfied culture and the moral elevation of the soldier in the popular imagination has led to a modern version of the infamous dolchstosslegende, the stab-in-the-back theory which encouraged Germans to believe that they had not really been defeated in the First World War.

Robinson recalls that the "sharks" at the Daily Mail led the way. "A shameful betrayal of our servicemen"; "Treachery, politicians, and the shameful betrayal of this man of honour [Richard Dannatt]", its headlines have screamed. Sensing blood, the rest of the press have joined the frenzy, not least The Sun in its current and ongoing campaign.

Thus, it is held, the army's humiliation in Iraq and its failure to bring peace to Helmand, are not its fault. Rather, the Labour party, and in particular Gordon Brown, "coldheartedly sent the troops off to die without the proper equipment and without the reinforcements which might have enabled them to achieve victory." If only they'd had the tools to do the job, our fine 'boys and girls' would have dispatched the Taleban long ago."

For the past two years, elements of the British press and the British army (with General Dannatt to the fore) have worked all out to propagate a similar myth. This is, of course, says Robinson, perfect nonsense. He adds:

One of the more galling sounds of the past two years, he says, has been that of Americans smugly observing that the British have been slow to learn the lessons of modern counter-insurgency. The criticism has been especially hard to bear because it is true. Many of the British army's problems have been of its own making.

As one officer participant has eloquently put it, the decision in 2006 "to scatter small groups of soldiers across the north of Helmand, in isolation, in an intelligence vacuum and with complete disregard for the most basic tenets of counter-insurgency was, quite simply, a gross military blunder." And even if it is true that this decision was the result of "political pressure" from London (which it was not), it was the responsibility of the generals to resist such pressure and to insist that the troops be used sensibly.

In the Second World War, Robinson notes, General Alan Brooke would argue all night with Churchill when he thought the prime minister was making absurd military judgments. In the same way, while politicians make the decisions on whether to deploy troops overseas, senior officers have a duty not only to ensure that troops are used in sensible ways, but to tell the politicians what those would and would not be. Alas, Britain's military leaders have failed to restrain the Labour government from its strategic follies.

According to Robinson, the reason why this situation came to pass stem from the late 1980s, when the British armed forces were orientated almost entirely towards the Soviet threat. The collapse of communism left them without a raison d'être but, rather than destroying Britain’s military, the Labour party saved it. The 1997 strategic defence review provided a new mission — expeditionary warfare to be a "force for good" around the world – which the top brass embraced with zeal. Their existence depends on it.

From there, however, the man then seems to go astray. He argues that these factors together mean that the armed forces are institutionally averse to recognising a fundamental truth - that the problems they have faced in Iraq and Afghanistan derive not from a lack of resources but from the very nature of the missions themselves.

Recognising, he says, this "would mean admitting that expeditionary warfare is not a good idea, and admitting that would cast the whole defence budget into doubt." Blaming Mr Brown provides a convenient way out of this impasse.

More specifically, the strategic defence review – and subsequent white papers – reconfigured the military for the rapid reaction concept, dedicated to early intervention with decisive force, enabling speedy task completion and short-duration deployments. Thus, the military was never equipped for the low-intensity, long wars which it has had to fight.

Nonetheless, Robinson's overall premise is not wrong when he asserts that, in 1997, the Labour government gave the country a new strategic direction, which has not worked out well. He thus concludes that if the Conservatives take power next year, they will inherit and complete the latest defence review. In the process, future defence ministers, including possibly General Dannatt, need to do more than merely juggle resources.

They need to re-examine fundamental strategic assumptions. The stab-in-the-back myth stands in the way. It maintains the pretence that the basic direction was all right, and merely the implementation went wrong, so that all can be solved with the application of additional funds. While this story may serve some narrow bureaucratic interests, says Robinson, it does the people of Britain no service at all.