An betrayal of office 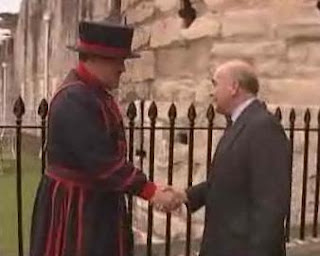 "General Sir Richard Dannatt, the former head of the British Army, is to become a Tory peer and adviser to the Conservative Party on defence, David Cameron is to announce," reports The Daily Telegraph.

This, of course, puts Dannat's interview with The Sun in perspective. He was talking not as a former head of the Army but as a Tory advisor. And how long he has been assuming that role, we shall never know. But since his message yesterday has not changed from his previous pronouncements, we can only assume that this has been the case for some time.

According to Sky News, however, this need not be an assumption. Jon Craig reports a senior Tory MP telling him: "Between you and me, he has been advising us for years." This MP "wasn't at all surprised" when he heard of Dannatt's new role. "There has been talk at Westminster for some time that he might become a defence minister in the House of Lords if the Tories win the election next year."

For a man who has displayed lamentable judgement in his post as CGS, however, this is but a continuation of that same poor judgement. By tradition, ex-service chiefs, on ascending to the Lords, become cross-benchers, staying above party politics. If indeed, while in the post of CGS, Dannatt has been advising the Tories, it is more than bad judgement. It is a betrayal of his office.

Furthermore, by entering the cockpit of narrow, party politics, Dannatt has diminished himself, his former post, and whatever advice he has given and will give. It will be forever tainted.

How interesting it is that, when Dannatt made his debute on the public stage, the Daily Mail called him "a very honest general". It now turns out that he has been a very dishonest general.

For the Conservative Party also – and Mr Cameron in particular – this is appalling judgement. It plays into the hands of those who would have it that Dannat's advice was tainted by party poltics, as opposed to merely being ill-considered. It diminishes substantially the authority of the post of Chief of the General Staff, the holders now being regarded as potential recruits for the political party machines.

Whatever the intentions of General Dannatt might have been, Mr Cameron should never have even considered, much less allowed, a former CGS to take the Conservative whip. This is a major error on his part, and one he will have cause to regret.