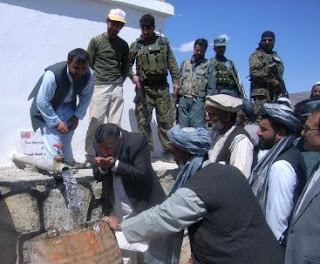 Pauline Neville-Jones, in her speech to the Conservative party conference today told us that: "Security lies in the society we create ... government cannot provide it". One wonders whether she was listening to her own words or whether Liam Fox, who followed her, took them in.

Both expressed their commitment to the "war" in Afghanistan, where the best part of 9,000 British troops are committed to providing security for the people. But what applies to the UK surely applies to Afghanistan.

If Neville-Jones is right about Britain, and her observation does have general effect, then the central premise on which our entire intervention in Afghanistan is based must be flawed. The government can no more provide security for the people of Afghanistan than it can the people of the UK.

That much is beginning to be painfully obvious from a spate of media reports from Afghanistan, the latest in The Times which records a slump in morale amongst US troops stationed in the mountainous Wardak province, southwest of Kabul.

Their chaplain Captain Jeff Masengale notes that "We want to believe in a cause but we don't know what that cause is." The soldiers are angry, he says, that colleagues are losing their lives while trying to help a population that will not help them.

"You give them all the humanitarian assistance that they want and they're still going to lie to you. They'll tell you there's no Taleban anywhere in the area and as soon as you roll away, ten feet from their house, you get shot at again," said Specialist Eric Petty, from Georgia.

Many soldiers thus feel they are risking their lives - and that colleagues have died - for a futile mission and an Afghan population that does nothing to help them. "The many soldiers who come to see us have a sense of futility and anger about being here. They are really in a state of depression and despair and just want to get back to their families," said Capt Masengale.

This is redolent of a report in the Canadian Globe and Mail which had Canada's top soldier in Afghanistan, General Jonathan Vance, "lambasting" local Afghanis for their failure to cooperate in their own security.

Vance was on a trip to the "model community" at Deh-e-Bagh in the Dand district where troops were implementing a long-term security strategy. He had travelled less than a mile past the village on the way to another community where the Canadians hoped to implement the same secure-and-stay policy they had used in Deh-e-Bagh, when an oncoming Canadian military vehicle was ripped by a bomb planted in the road. Then, to add insult to injury, one of the three armoured vehicles in his convoy was hit by the shrapnel from a rocket-propelled grenade.

Gen Vance, we are told, was "steaming". "It infuriates me," he said after ordering the convoy to return to Deh-E-Bagh so he could lambaste the local people for not warning the Canadians about the explosive trap set by the Taleban. "A determined person can still get through," the general said of the safety perimeter that the Canadian troops have established at the village. "But we rely on the work of the local population."

Therein, it seems, lies the problem ... Gen Vance, meet Dame Pauline Neville-Jones: "Security lies in the society we create ... government cannot provide it". To date, there are no signs that Afghan "society" is at all disposed to responding positively to the efforts of the coalition forces.

Furthermore, it is not within our gift to create or re-create Afghan society, and nor would the people of Afghanistan thank us for trying. If then, within the society that already exists, there lies no security, what hope of success is there in the current strategy? We seek their "hearts" and they give us their mines. This is not a favourable exchange rate, and one which is certainly not sustainable.