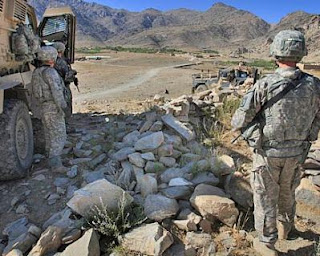 On Afghanistan, the truth is that there are few differences between the two leaders [Brown and Cameron], says The Sunday Times. In fact, there are major differences – as we pointed out yesterday.

The Conservatives have very publicly bought-in to the McChrystal "strategy", agreeing (in principle) to more troops in theatre. The government is maintaining its more cautious "strategy first – then resources" stance. This leaves its options open, avoiding being left out on a limb if Obama comes up with a different strategy.

Quite how "political" the issue has become is brought home by two pieces in The Sunday Times. The first, from Christian Lamb, sketches out the political background, pointing out that there is now a clear divergence between Obama and McChrystal – something which the Conservatives have given no public signs of recognising.

The second piece is from columnist Andrew Sullivan, who underlines the difficulties president Obama faces in attempting to craft a strategy for the campaign in this troubled country.

"The near-impossible least-worst option remains maddeningly elusive," writes Sullivan. This is an Afghanistan after 30 years of violence, mayhem, brutality and anarchy. To believe that America can create a functioning, stable state in that context seems insane to him. Given America's fiscal crisis and profound public unease at deepening the commitment, a reckless bet on the future with a large increase in troops seems a definition of unwise.

He is worried about McChrystal's "all in or all out" analysis. It is not "quite right" he feels. Sketching out the consequences of both, Sullivan believes that, "In a moment of immense unpredictability and fluidity, it seems that muddling through for a while may be an unsatisfying but sensible option".

In support of this thesis, he cites Marc Lynch, "as shrewd a foreign policy analyst as exists in Washington," who argues: "Why choose between escalation or withdrawal at exactly the time when the political picture is at its least clear? Why not maintain a lousy Afghan government which doesn’t quite fall, keep the Taliban on the ropes without defeating it, cut deals where we can and try to figure out a strategy to deal with the Pakistan part, which all the smart set agrees is the real issue these days?"

Thus Lynch suggests focusing on applying the improved counterinsurgency tactics with available resources instead of focusing on more troops, If the American core objective in Afghanistan is to prevent its re-emergence as an al-Qaeda safe haven, or to prevent the Taleban from taking Kabul, those seem to be manageable at lower troop levels.

In other words, Sullivan avers, meticulously prepare for either the McChrystal counterinsurgency surge or a more low-key counterterrorism campaign. But right now, hold on to see what emerges. The time for a deep strategic call may not, in fact, be now. It will, for sure, be soon. But in wars and politics, timing is everything.

Where Sullivan may be being complacent though is in believing the Obama has time to play with. Separately reported by The Times are two incidents over the weekend in which ten US soldiers have been killed. They were stationed in remote outposts in the mountainous province of Nuristan, bordering on Pakistan and, in one of the incidents, where eight troops were killed, "scores" of insurgents are said to have stormed the outpost.

The presence of US soldiers is in part an implementation of Petraeus's "live amongst the people" doctrine, comprising the part of the "take and hold" strategy which McChrystal is advocating – and has been steadily rolled out since the arrival of fresh troop in May. Since then small packets of troops have been stationed, often in indefensible outposts throughout southern Afghanistan.

This is not the first time that relatively large numbers of US casualties have been taken in a single incident, with the New York Times currently reporting in the battle at Wannat in June 2008 when an outpost was almost overrun by 200 insurgents, costing nine American lives.

Time and again we are hearing that troop numbers are insufficient to complete the second half of the "take and hold" strategy. Having part implemented this strategy, McChrystal does not have enough resource to complete the next phase, leaving troops exposed and vulnerable. This situation is militarily and politically unsustainable.

There are already plans in place to withdraw garrisons from remote outposts in sparsely populated regions. These, in fact are already under way, where well-intentioned (or politically-driven) sallies into hostile territory are meeting with stiff resistance.

Under the current McChrystal "strategy", the plan is to concentrate troops in towns and cities, and therein lie the political fault-lines in Washington – as more will be needed than the current small-scale tactical withdrawals if massive reinforcements are not forthcoming.

Simon Tisdall writes in The Guardian of Kennedy and Vietnam parallels, and the challenge facing a young Democrat president. So, after a fleeting meeting between McChrystal and Obama – only the second time the pair have met – the political "game" is starting to be played for real.

Obama's national security adviser Gen James L Jones is now working to downplay the perceived importance of the McChrystal assessment, saying that it was just one part of a review of overall strategy that included such factors as a larger role for the Pakistani military and the integrity of the recent Afghan elections.

"It would be a mistake to underestimate the importance of other elements of the strategy," Gen Jones says, offering no endorsement of a recommendation for additional troops. He described McChrystal's recommendation as "his opinion" of "what he thinks his role within that strategy is." "The president should be presented with options, not just one fait accompli," he said. The general has been put back in his box. And now the real debate is getting under way – in Washington, if not London.