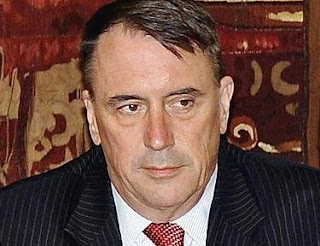 One of the preconditions being set by the British government before it will commit to sending more troops to Afghanistan is "a new Afghan government being in place" ready to seize the initiative on corruption, and ready to send more Afghan troops to be trained and partnered by our troops.

Unspecified but nevertheless implied is that the new Afghan government should be stable, holding power legitimately with the support of the majority of the electorate. Yet, weeks down the line from the presidential election, there is no sign that this happy state of affairs is any closer – in fact, quite the reverse.

Such is the turmoil that yesterday saw the unprecedented sacking of Peter Galbraith (pictured), the deputy head of the United Nations Assistance Mission in Afghanistan (UNAMA) after he had written a scathing letter accusing his boss of concealing election fraud that benefited Hamid Karzai.

The head of the mission, Norwegian Kai Eide, denies any wrongdoing, but Galbraith's charge is seen as confirming that the presidential election was hopelessly undermined by fraud.

"For a long time after the elections, Kai denied that significant fraud had taken place, even going to the extreme of ordering UN staff not to discuss the matter," Galbraith wrote. "And, at critical stages in the process," he added, "he blocked me and other UNAMA. professional staff from taking effective action that might have limited the fraud or enabled the Afghan electoral institutions to address it more effectively."

With Karzai currently tallying 54.6 percent of the vote, Afghan national elections officials are now conducting a recount and fraud review under UN oversight, but Galbraith is standing by his accusations of a "cover-up".

EU observers, who are also maintaining a watching brief, have said nearly a quarter of all votes cast could be fraudulent, including a third of those polled for Karzai. The fraud inquiry has the power to strike out rigged ballot boxes and will rule by 7 October. That will determine whether Karzai has legitimately won a second term or must face a two-man run off against his principal opponent, Abdullah Abdullah.

Whatever the result, not only is Karzai damaged, the standing of the international community - and especially the UN – has also suffered. The UN as a institution is being seen by Afghans as partially responsible for the fraud, having failed to take measures to prevent it, and now complicit in the cover-up.

This is a situation which seems hardly recoverable and can only reinforce coalition fears that a Kabul government with not even the façade of legitimacy is an unreliable partner in the prosecution of the counterinsurgency. This makes for an increasingly uncomfortable situation as General McChrystal continues to make his pitch for more resources, predicated on supporting the Kabul government in extending its writ to the rest of the country.

"Neither success nor failure in our endeavour in support of the Afghan people and government can be taken for granted," says McChrystal. On the back of deteriorating situation, however, failure looks a closer bet.