The chain of command 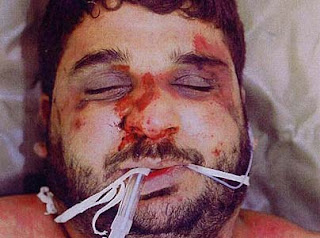 Some of the more strident rhetoric associated with the fate of Iraqi civilians during the occupation of southern Iraq by British Forces is so closely associated with the anti-war movement that one tends to discount many of the claims of ill-treatment - although some are clearly well-founded, particularly the death of Baha Musa, the Iraqi hotel receptionist who died in British military custody after 36 hours of mistreatment in September 2003.

However, according to Michael Evans of The Times, picking up on a BBC Radio 5 Live programme, new allegations have emerged. They were made by a former member of the RMP in an interview with Donal MacIntyre. The RMP investigator says that the force had been out of its depth in Iraq.

"I've seen documentary evidence that there were incidents running into the hundreds involving death and serious injury to Iraqis in the last six or seven years where the chain of command of the Army had decided that the circumstances did not warrant a Royal Military Police investigation ... and it's of great concern that among those there will have been undoubtedly suspicious deaths and serious injuries that were never properly investigated," he said.

In November 2006, we ran a piece about Dutch MPs torturing Iraqi prisoners, with the complicity of the British – and even under their instruction – but did not follow it through. And neither was there any follow-up in the British press. But it was a disturbing report.

Now, this unnamed former RMP alleges that the military chain of command made it difficult for the RMP to operate independently by not providing resources or denying access to prevent investigations. Investigators who failed to toe the party line would be overlooked for promotion and receive an "adverse report".

Referring to Mr Musa's case, he said: "It was a murder investigation on a plate ... and amazingly this investigation was closed down or put in the waiting tray for a whole year." He continues: "The whole system of military justice is flawed ... and there is a very high risk there are other Baha Musas out there because of the number of incidents not investigated at all by the Royal Military Police, let alone an ineffective investigation."

The former RMP then claimed: "There's a catalogue of blunders, mistakes, ineptitude and the course of investigations being bent to serve the real or perceived interests of the chain of command of the Army." It is that last sentence that worries me most. My own investigations into the campaign in southern Iraq also detailed "a catalogue of blunders, mistakes" and "ineptitude" ... albeit not of a criminal nature.

Furthermore, I have spent too much time talking to parents and relatives of dead soldiers, trawling through coroners' inquest transcripts and other official documents not to realise that in many other areas, "the course of investigations" are "being bent to serve the real or perceived interests of the chain of command of the Army."

Overall, I gain the impression that the Army is a sick organisation. Its response to its "defeat" in Iraq has not been healthy – I have seen no serious attempt to identify and deal with the many mistakes and failings that were made, and neither does one see any attempt to deal with tactical and operational failings that are occurring in Afghanistan.

What is thus deeply troubling is the popular "lionisation" of the military, the uncritical acceptance that the military are beyond reproach and that any ills besetting the Armed Forces are entirely political in origin.

While there are indeed many and serious political failings, I have been in this game long enough, and spent enough time researching the issue to know that there are serious flaws in military system which remain untouched, not least because "the course of investigations" are "being bent to serve the real or perceived interests of the chain of command of the Army."

The concern is that what happened in Iraq is set to happen again in Afghanistan. I am by no means alone (although the sentiment is heard more widely across the Atlantic than here) in suspecting that the constant refrain by the military for more resources and more manpower has very little to do with operational need. Rather, it is an elaborate – if intuitive – ploy to set up an alibi for the failure that is inevitably to come.

On the basis that, when (rather than if) the campaign goes belly-up, the military can be exonerated from any blame, simply on the grounds that it has been denied resources by the evil, heartless politicians. And, if the collapse occurs on the Tories' watch, they will be as much in the frame as would have been the Labour government.

It would be easy to dismiss such a view as cynical, but it is also necessary occasionally to stop and think for a moment, and then reach beyond the current political personalities and the dramas attendant on them. If we are poised on the edge of failure in Afghanistan – and I believe we are – then the effect on us as a nation, all of us, will be extreme in ways that we can only begin to imagine.

We cannot really allow or afford for this to happen. But if there is any chance of stopping it, then the scrutiny and the debate is going to have to be considerably more sophisticated and searching than it has been. Our unnamed RMP may be a "canary down the mine", in which case we have more serious problems than we thought.