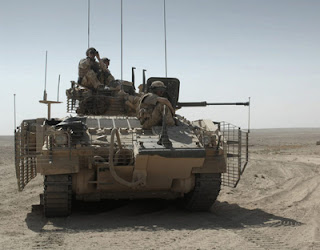 Gen. Dannatt may bemoan the indifference shown to the Armed Forces, fighting in far away places but, if he wants more interest shown, he might look to his own MoD website.

We pick up from there recently, news of an offensive code-named "Palk wahel" or "Sledgehammer Hit", conducted in the Upper Gereshk Valley region. It was undertaken by a 2,500-strong task force, including elements of 1st Battalion the Royal Gurkha Rifles and was characterised by the first major deployment of Warrior Armoured Fighting Vehicles, crewed by 1st Battalion the Scots Guards.

The news of the Warrior deployment is itself significant, and follows the report from Vaughan Smith, earlier this month – a deployment we thoroughly applauded as being long overdue.

British troops seem to have been engaged in this area for a great length of time and last July we were getting reports of action, under yet another code name, this time "Chakush" or "Hammer", this one in the area between Heyderabad and Mirmandab, north east of Gereshk. 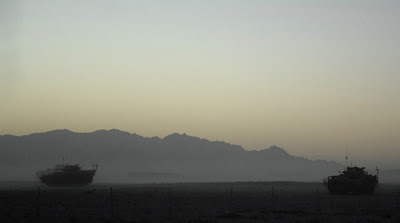 Between then and now, there is no really coherent thread. From the perspective of the "home front", all we are getting is a series of disjointed reports, with little or no follow-up and thus no real idea of what progress is being made. There are, for instance, no annotated maps, no "phase lines" and no real descriptions of objectives and achievements.

This much was recorded by The Independent, which notes that there have been eight operations along the upper reaches of the Helmand river this year, the main one being Achilles, in March, followed by several sub-operations and smaller offensives. But, is says, few details tend to emerge afterwards, apart from the circumstances in which service personnel have been killed.

What we do learn, but only from that paper, is that the current operation was vital to break Taliban resistance in a key area of southern Afghanistan and, from all accounts, it was extraordinarily successful. Amongst other things, the multi-national force found a network of well-established bunkers at a former Taleban stronghold, "solidly built with overhead protection and sandbag walls" – positions which suggested the Taliban "thought they were in the district to stay". 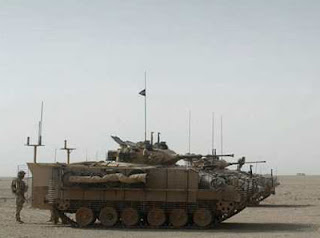 However, the extent of the success – as with other operations - is hard to measure, owing to the paucity of reports. But one does wonder if these were significant gains and whether the Warriors were a decisive factor. It is not untoward to speculate that the arrival of "real" armour would have such an effect.

Here, the MoD might be a victim of its own propaganda, having puffed up the clearly inadequate Vikings, it can hardly praise too highly the Warriors as that might invite questions as to why they were not these sooner and why there are not more of them.

Therein lies Dannatt's problem. If he wants our support, he is going to have to give us a little bit more information and a little less propaganda.