Careful with the baby 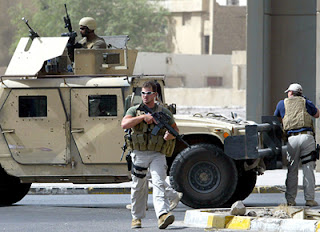 One could almost hear the glee in the voice of the BBC newsreader as she announced what appears to be the demise of Blackwater, the private "security consultants" who provide the protection for – amongst others – US State Department officials in Iraq.

The firm has, according to the BBC, lost its licence to operate in Iraq after being involved in a "gunfight" last Sunday in which eight civilians are said to have died, with 13 others wounded. It is claimed that one of the dead was a policeman.

The Iraqi interior ministry is cited saying that Blackwater was now banned from operating in Iraq. All the company's personnel, we are informed, have been told to leave Iraq immediately, with the exception of the men involved in the incident on Sunday. They will have to remain in the country and stand trial, the ministry said.

However, we get a very different slant from Time magazine, which reports that the interior ministry has "suspended" Blackwater's license and then talks of the problems that would arise if the suspension is made permanent.

Blackwater has more than 1,000 personnel in Iraq, most of whom are engaged in protecting senior State Department personnel and others carrying out sensitive work in the country, without which US government would find it very difficult to operate. Nor could US troops be used as the State Department needs maintain a certain degree of separation from the military, in conducting its diplomatic and administrative functions.

Despite the huge contribution contractors make to security in Iraq – with an estimated 20,000 present in the country, the left-wing media detest them with a vengeance – and some operators (Blackwater included) have certainly acquired a reputation for being trigger-happy.

And, in the wake of this incident, House Oversight Committee Chairman Democrat Henry Waxman has announced that he will launch an investigation into the incident, calling it "an unfortunate demonstration of the perils of excessive reliance on private security contractors." 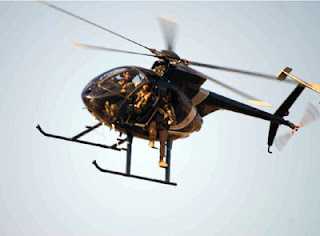 From a staunch "liberal" this can only mean trouble, but it would be a service to western nations if there was a properly-founded and far reaching examination of contractors in military and security roles. Not least, firms like Blackwater have shown themselves to be more innovative than the established military and, in certain instances, better equipped.

Furthermore, in the context of spiralling defence costs, contractors can often operate more cheaply and, if politicians can desist from interfering, they could achieve results that conventional forces cannot.

In the surge of righteous indignation over the activities of Blackwater, therefore, it would be as well to take a more considered view of contractors' activities, especially when, in this increasingly anti-militaristic society, there seems to be limited support for maintaining large and costly standing armies, and even more resistance to deploying them.

If there is too much indignation, we might run the risk of throwing the baby out with the bathwater.