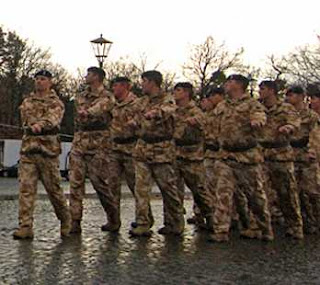 It was last Friday that Gen. Dannatt asked how many local authorities had considered planning "welcome home" parades for troops returning from Iraq and Afghanistan.

Yet, it has taken this long for The Daily Telegraph to contact "more than a dozen" councils (those containing large Army bases, such as Surrey, Wiltshire and Yorkshire) and find that none have arranged parades.

This, the paper makes a meal of, publishing a front page piece headed, "Parade snub for Britain's returning soldiers", also giving a full page to several pieces inside the book and a leader sporting the title, "Giving Tommy his due".

Something of a bellwether of soldiers' opinion, however, is the unofficial Army forum, ARRSE. Members are often quick to post on subjects such as this and the threads often attract thousands of visitors and hundreds of contributions.

Strangely, though, there seems to be no thread on the Telegraph's initiative and, furthermore, the comment on the paper's own site is muted. And two of such are far from enthusiastic. One declares that, "While a homecoming parade is a good idea I suspect that soldiers would prefer to be properly equipped, paid and housed and to have their human needs properly catered for before money is spent on parades." Another, from a retired Major, states:

Fortunately, I have not been asked to go to either of the two most recent conflicts; but if I had, I don't think I would have particularly enjoyed the extra hassle on my return of getting my kit ready for a public parade. So long as soldiers are awarded their medals promptly after a tour, I suspect most don't really mind what their local mayor thinks of their return; and especially those who own their own houses are probably as keen as anyone to keep council tax down.

Intuitively, the Major's comments seem to have the ring of truth, and soundings by this blog seem to confirm that sentiment. Properly to organise a parade requires sorting kit, drill practice and rehearsals, for troops who are tired and anxious to get away on leave after their debriefings. After a return, time is precious and delay is not popular.

Nevertheless, the Telegraph manages to recruit Gerald Howarth, a shadow defence minister and MP for Aldershot, and Liam Fox, the shadow defence secretary, to the cause. Says Fox, the absence of any significant homecoming events "was a damning indictment of the gulf between the British public and the country's Servicemen and women."

But, actually, no it is not. This has all the hallmarks of an "engineered" outrage. It has no substance and, if anything, suggests that its promoters are out of touch – or have their own agendas. And, when the silence of the Tory defence team on substantive equipment issues is noted, it is difficult to avoid thinking that the "outrage" is merely headline chasing.

If that is the case, our troops are worth a good deal more than that.