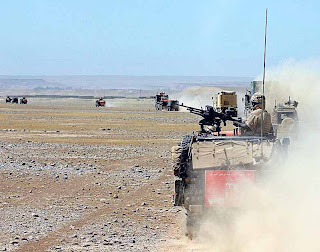 It was none other than Lord Malloch-Brown, junior foreign office minister, who yesterday was holding forth on the BBC Radio 4 programme The World Tonight about the need for European "force multipliers" to support the United Nations troops in Dafur.

In particular, he spoke of the need for helicopters. Otherwise, he said, the 26,000 troop detachment had no chance of covering the territory. Restricted to vehicles, they could take days to reach a trouble spot, too late to intervene and tying down forces in unproductive travel. 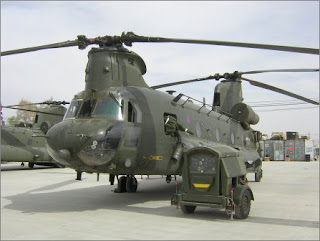 Such clarity from Malloch-Brown, however, might also have been directed at the Ministry of Defence. If we are to believe The Sunday Telegraph defence correspondent, Sean Rayment, (and there is no reason why we should not) then, to support something like 7,200 British troops in Afghanistan, we are able to field a mere ten support helicopters, eight Chinooks and two smaller Lynx. Furthermore, the Lynx cannot fly during daylight hours because of the high temperatures.

And it is not only a question of force multipliers. "Support helicopters," writes Rayment, "are vital to operations because of the dangers of moving troops, fuel, ammunition, rations and water by road."

Those dangers were highlighted last May when the MoD posted an account of a convoy operation which was delivering fuel and ammunition – plus other supplies – to troops in the Sangin valley. The MoD quoted convoy commander Captain Andy Rouse recounting that there were "mines to negotiate in certain areas, left behind by Russian forces in the late 1980s", him saying that, "It is not uncommon for vehicles to be struck by them". He continued:

Although there is the threat of attack from insurgent forces along any part of our route, one of our main concerns are hitting land mines, so map reading is key during any convoy operation.

This could have been the reason for the death of a soldier, reported today by the MoD. He was killed and another injured when in the same general area of Captain Rouse’s convoy, "an army dump truck was hit by an explosion whilst taking part in a routine logistics convoy".

There is, of course, the possibility of an IED or a deliberate mine attack. The Taliban are known to re-use mines and have even been reported to have paid children to harvest them for that purpose. 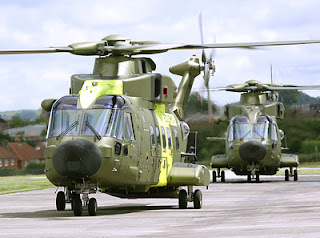 Unfortunately for the troops who must so often run the gauntlet, not only do they not have Lord Malloch-Brown as their advocate, senior military officers are under strict orders not to make public demands for more helicopters because the RAF has no more to send. It will be next year before the first of the new Merlin helicopters arrive.

All this once again reinforces the need for additional heavy-lift helicopters, right now, an issue we have raised several times. And, at £6,000 an hour compared with the £34,000 an hour it costs to run a Merlin, the Russian-built Mi-26 helicopters could not only provide better value, they could as the photograph below shows (and here) even carry heavy vehicles like the dump truck (illustrated below right: a Volvo FL-12 at 10 tons unladen weight - half the maximum load of a Mi-26) in which the unfortunate soldier was so recently killed. 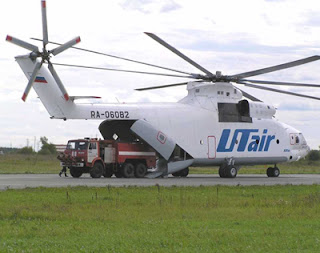 What is also of great importance is the arithmetic of the convoy operation. In the MoD article referred to above, Captain Rouse's convoy comprises 40 vehicles and takes three days to travel the 150 miles to its destination and return. Inspection of the multiple photographs supplied (two shown) suggest that at least half the vehicles were escorts (WIMIKs and others) and with each of the cargo trucks carrying at least two men (driver and "top gunner"), there cannot be less than 100 men in the convoy – effectively a Company equivalent. 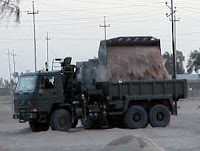 Estimating the carrying capacity from the types of vehicle shown, the total supplies delivered cannot exceed 200 tons, taking up 300 man days, plus considerable wear and tear – plus on this most recent occasion, the loss of an expensive vehicle, the death of one man and the injury of another.

On the other hand, a Mi-26 could deliver 200 tons to the same location in less than 30 flying hours - easily achievable over three days - with the direct employment of 2-3 men, less than one-thirtieth of the manpower the Army used. 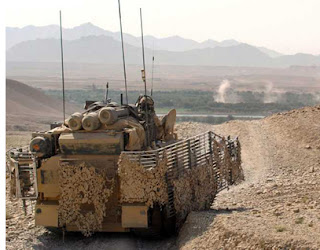 Nor indeed does it stop here. In other of its routine propaganda "puffs", the MoD extols the virtues of its 35-year-old "robust and effective" Scimitar light tanks and Spartan APCs (pictured) in operations in Afghanistan. In one operation, it describes tactical operations thus:

In Helmand it's impossible to avoid the attention of the Taliban's own reconnaissance network; motorcycles trailed the multinational patrol from a distance, reporting their approach throughout. The deliberate crossing of the kilometre wide and 100 metre deep natural obstacle of the wadi and the final 45 kilometre approach of the patrol was therefore completed at high speed in just five hours, with the patrol changing direction every kilometre to keep Taliban ambush teams en route guessing as to its ultimate destination.

The imaginative tactical manoeuvring is admirable but the long distances and hard pounding is wearing out these ancient machines and creating considerable maintenance burdens. It should, therefore, be noted that a Mi-26 can carry a Scimitar tank and, in the five hours over the distance, could have delivered ten such vehicles. The tactical advantages are only too apparent and the savings on wear and tear would be substantial.

Once again putting all this together, we have an option which is cheaper, safer, needs substantially less man hours, saves on troop numbers and is a proven "force multiplier".

Yet, despite months of lobbying and an unanswerable case, still the MoD does nothing.