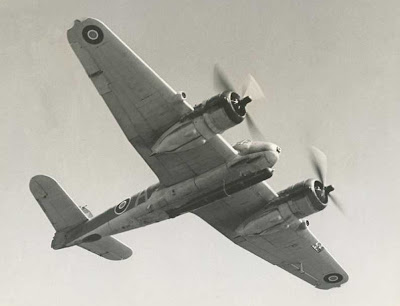 A mystery donor sent staff at RAF Halton an envelope full of pristine World War Two photographs of diverse subjects including the Dambuster attacks and Generals Eisenhower and Montgomery. The pictures were received by Squadron Leader Colin Baker, who is Halton House's Historian. He was approached by a gentleman in his 80's at the recent Halton House Heritage Day.

Some have been displayed on the MoD website, including this one here, of a WWII Beaufighter carrying a torpedo.

Although eclipsed by the much more famous Mosquito, I have always had a soft spot for this machine, which had a fine war record and was warmly regarded by its pilots, 70 of whom became Aces while flying the machine. (Click the pic to enlarge.)