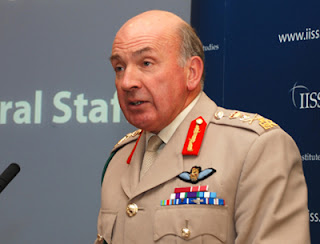 It was inevitable that the media would pick out the "human interest" issues from the speech given to the International Institute for Strategic Studies in London yesterday by Chief of the General Staff, General Sir Richard Dannatt.

That much, in fact, was pre-ordained when the MoD itself gave it that "spin", having Dannatt speaking about "a growing gulf between the Army and the Nation".

Thus, we got from The Times, the headline, "Our soldiers 'deserve US-style parades'", from The Independent, "No sympathy for Army, says chief", and from The Daily Mail, "Honour troops with 'welcome home parades' to boost morale says Army chief".

The essence of Dannatt's speech, therefore – as far as the public is concerned – was effectively summed up as. "soldiers returning from Iraq and Afghanistan were dismayed to find the public could be 'dismissive or indifferent' to their experiences," triggering earnest debates on the BBC and other broadcast media about how to address this problem. 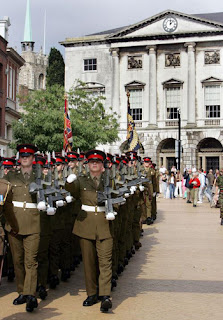 In fact, when it comes to parades, these do happen, as here in Chelmsford last year (pictured) but frankly, unlike the posturing Europeans, that is not the British way. We do not go in for this sort of exhibitionism that is so common on the Continent.

More to the point, the "indifference" of which Dannatt complains is hardly a new phenomenon, witness the Fourteenth Army in Burma at the end of the Second World War, which labelled itself the "Forgotten Army" because its operations were overlooked by the contemporary press, and remained more obscure than those of the corresponding formations in Europe for long after the war.

Equally, troops fighting the murderous war in Korea – many of them conscripts – themselves remarked about how their contemporaries back home so often seemed totally unaware that there was even a war going on, and the media was equally remiss about the close reporting of events. Even now, public consciousness of that war is limited and, compared with the much more public war in the Falklands thirty years later, the number of books written about the events in that Asian peninsular is tiny.

However, now that the full text of Gen. Dannatt's speech is available on the MoD website, we can actually see that his comments on what was styled as "the covenant between the Army and the nation as a whole" were but a small part of a wide-ranging and, at times, profound dissertation.

What, actually, Dannatt was doing was – in his own words – outlining "the context" in which he saw the British Army "operating, now and in the future", explaining where he would like to see the Army going in the long term. And, in so doing, he acknowledged that the "direction of travel" was inevitably constrained and conditioned by "what we are doing in the short, and perhaps the medium, term."

If a lazy media had read and analysed the speech, rather than the press handouts, they might thus have written much more interesting and informative pieces – although that was never going to happen. And therein, actually, lies the story – one which Dannatt dare not broach. That is the almost complete inability of the media to report defence issues seriously, a deficiency on which we have reported many times (for instance, see here, here and here. 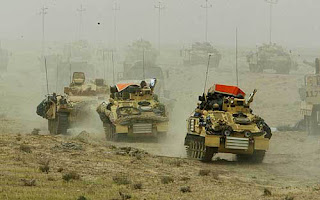 For a taster of what Dannatt said, we see him reflecting on the Army that went into Iraq in 2003 – an Army still largely equipped and shaped by the legacy of the Cold War, developed for the Northern German Plain and adapted latterly, and not without difficulty, for the deserts of the Middle East. But, he asserts:

…the Army that crossed the Line of Departure on that morning in March 2003 has gone. We have adapted and reformed at an incredible pace in only four years and we are only at the start of a journey into the future that has been catapulted into focus by our current campaigns.

The equipment and capabilities being used by our troops now, he claims, represent "a quantum leap ahead and are what is needed". 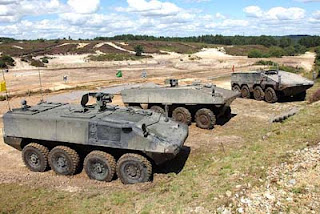 If that is a highly tendentious statement, the next betrays the thinking we have seen before. Dannatt thus declares:

Our future transformation is an issue for now, not for some far off point on a planner's wall – FRES – our medium weight vehicle programme - is a perfect example. It is not now a system that is just required for a future intervention, but it is a capability that we need in this extended campaign as soon as possible.

In that short section, therefore, we see encapsulated the tension between current operations and the "future army". Furthermore, in Dannatt's comments we a determination (possibly suicidal) to employ FRES equipment for counter-insurgency operations, something we have argued is distinctly unwise.

Over these issues, there is a vibrant debate going on – both sides of the Atlantic. But it is not a debate of which you will see any sign in the popular media, which does not seem to have noticed it is going on, in common with the political classes.

So it is that the media would have our returning troops parading triumphantly outside their local town halls but, when it comes to understanding and commenting intelligently on the shape of the Army and its equipment, it has long gone before even the echoes of the bugles have faded. Perhaps someone in authority, somewhere, will eventually have the courage to state this salient fact – that the media are a crucial part of the problem.