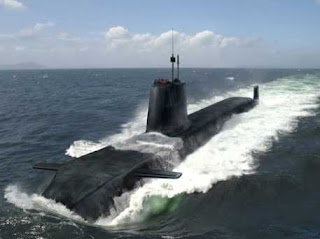 We saw yesterday, the annual report from the Public Accounts Committee on defence spending on capital equipment.

In a now familiar ritual, the Committee routinely castigated the MoD for its latest round of overspending. This, according to the committee, now stands at £2.6 billion over budget on its 20 biggest projects, which, the Committee said, "could have a damaging knock-on effect on the Armed Forces". Additionally, this year, the PAC also criticised the MoD for a certain amount of "creative accounting".

Needless to say, the MoD cherry-picked the good bits from the report, and offered the now ritual denials of any wrongdoing. Meanwhile, the media offered some disapproving “tut-tuts”, with the likes of The Times, The Daily Telegraph and the Independent all picking up on the headline £2.6 million figure so conveniently highlighted by the Committee.

However, even this was a familiar routine and, with their spleen vented for another year, the media have gone back to sleep, with nothing by way of follow-through in today's media.

But then, this is hardly surprising. Overspend on big projects is virtually a given, not only in defence but in virtually every sector, from IT to civil engineering, to say nothing of the current Olympics project. And neither is it a British phenomenon, with the same familiar story being told of US, Australian, Indian and even Turkish projects.

However, looking back to 2005 – I don't think we could be bothered to do a review last year – we see an interesting contrast. Compared with this current complaint of a £2.6 billion overspend (11 percent of budget), the figure then reported was £5.9 billion, or 13 percent of the total forecast set at approval – although the cumulative delay for the top 20 projects was then to 206 months compared now to 433 months.

In fact, by general consent, the government – largely through the intervention of the procurement minister Lord Drayson – has got a grip on the spiralling costs and large projects do seem to be better managed. And, since many of them are "legacy" items, such as the Astute attack submarine programme (pictured), the Nimrod and the Type 45 Destroyer – where the overspend has already been incurred - there is very little that can be done other than contain further increases.

But, in 2005 – as of now – we feel that the Committee and the media miss the point, or do not go far enough. It is all very well criticising the management of current projects, after they have been approved, but in many cases it is arguable as to whether they should have been approved at all. Certainly, in respect of the Nimrod MR4 project, hindsight at least would suggest that a new-build would have been a better option.

The weakness in the system is that the MoD makes its own decisions, without consulting Parliament – as opposed to the US system where Congress holds the purse-strings and each individual project must be approved in advance before money is released. Whether that would make for better decisions over here is moot, as the US system has produced some pretty dire systems, although we have also seen some excellent weapons emerge.

Another weakness of the British system is that, once a weapon or system goes into service, there is little if any Parliamentary oversight. The MoD and the relevant Services largely escape scrutiny, and there is rarely any input into whether equipment is to be retired, refurbished or upgraded.

Finally, while all the emphasis is on the big-spending projects, there is next to no oversight on the smaller programmes although, cumulatively, these can involve very large amounts of money and also have significant impacts on operational efficiency.

In short, for a system of Parliamentary democracy, the MoD is far too much a master in its own house. This is a subject to which we will return.