A Nato run by France? 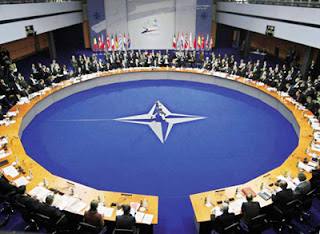 We saw the news a while back that France was considering rejoining Nato as a full member.

This was a development hinted at by Nicolas Sarkozy who, in a foreign policy speech last month, said he would shortly take "very strong" initiatives to build up European defence and renew the NATO military alliance. We wanted France to resume "its full place" in the organisation, insisting Nato was no rival to France's ambition of a robust European defence capability.

As one might expect (or not?) Pravda was more than a little bit "sniffy" about the whole idea, suggesting that Sarkozy was simply bidding "to win Tony Blair's place to become Bush's poodle" but, in today's Daily Telegraph former Europe Minister Denis MacShane (and currently UK delegate to the Nato parliamentary assembly) puts a different spin on it.

Writing under the heading, "The West needs France to rejoin Nato" he offers the thesis that, since General de Gaulle quit the military structure of Nato in 1966, French-alone geopolitics have not helped advance French national interests or made the world safer. Inside Nato, all that could change.

The background to this thesis is that, while in the 1960s, America was the supreme military power outside the communist bloc, today, it is a "wounded beast". On the other hand, while Europe has been the leading advocate of "soft power", harder power is needed as well.

Nato with France reintegrated could shape a European dimension to a new security policy aimed at helping the elected governments of Afghanistan, Lebanon, and in due course, Pakistan - even Iraq - to defeat their external enemies.

Then, however, we get the real message: "France outside Nato makes the concept of a common European defence policy difficult - if not impossible. France in Nato can take the lead, with Britain, in the long overdue rationalisation of Europe's military policy, profile and procurement." MacShane then continues:

The fear that France in Nato means subordination to Washington is unfounded. Proud Nato nations such as Germany, Italy and Spain have all had no compunction in refusing to heed Washington's call for armed support. Nato is based on a democratic alliance of the willing, not the obedient.

But as British soldiers die in Afghanistan, surely even the most die-hard Eurosceptic might accept that forging a European military identity and self-confidence makes sense?

No European nation can alone exercise effective military puissance. A new Nato and a new integrated military unity in Europe would send the enemies of democracy a clear message that they will not win.

There, you actually have the underlying agenda, writ large. This is not so much France rejoining Nato but a case of assuming leadership in place of an increasingly detached United States which, in the fullness of time is expected to withdraw completely. Nato thus becomes the very embodiment of the "common European defence policy difficult", disguised by keeping the trappings of the existing organisation - a classic EU ploy.

Meanwhile, the none too subtle strategy of undermining Nato as it stands continues apace. Only within the last few days did we learn of complaints that Nato's "flagship" rapid reaction force had fallen below full strength less than a year after its launch. According to "Nato sources" over-stretched allies have withdrawn pledges of military assets – or so we are told. Yet, the European Rapid Reaction Force – which relies on the same assets, most of which are "double hatted" and thus available for either – proceeds apace.

Then there is the vexed question of support for the Nato operation in Afghanistan where, complaints continue about lack of resources and the unwillingness of Nato members to provide troops and equipment.

What is utterly perplexing, therefore, is MacShane's assertion that "even the most die-hard Eurosceptic might accept that forging a European military identity and self-confidence makes sense". If that means – as it undoubtedly does – Nato minus the United States, with France taking over the driving seat, then it is a very poor deal indeed.