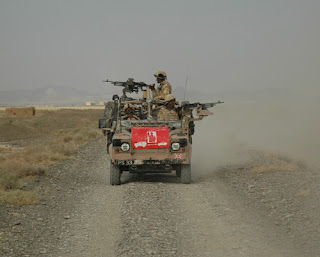 Following up on our reports on the death of two men on Wednesday night when their RAF Regiment Land Rover was blown up by a mine as they were patrolling Kandahar airport, Booker wrote in his column yesterday that the incident was more than just another tragedy. It was an avoidable and therefore unpardonable blunder.

"We have continued," he wrote, "to lose dozens of these hopelessly unprotected Land Rovers to mines and roadside bombs, at a time when almost every other front-line force in both Afghanistan and Iraq has been equipped with properly mine-protected vehicles, such as the Bushmaster, which have saved scores of lives. Even the lives of British troops have already been saved by the handful of mine-protected Mastiff patrol vehicles (pictured below right) which the Ministry of Defence has sent to both countries (although it won't tell us how many)." 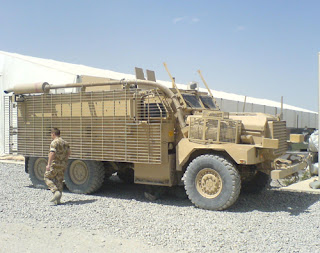 Last November, he added, it was reported that the Taliban were planning to make much more extensive use of mines, to "demoralise" Nato forces in Afghanistan. Every other nation except Britain has equipped its troops accordingly. Uniquely, the MoD is still happy to ask most of our young men to patrol in vehicles in which far too many of them have either died or suffered horrible wounds (again the MoD won't tell us how many have been injured).

This is not just a tragedy, Booker concluded: "it is an outrage, a national disgrace, for which senior figures in the MoD should be held personally responsible."

By coincidence, the Independent on Sunday also ran a piece on the military covenant, a long leader which, inter alia opined:

A key plank of this is that service personnel should be given the right equipment to do their jobs. Perhaps the most compelling example of this is the forces' continued use of the snatch Land Rover in Iraq and Afghanistan. The families of some serving soldiers are so concerned about the continued use of this vehicle – which was designed for Northern Ireland and is not armour plated – that they are considering bringing a class law suit against the Ministry of Defence.

Two of most recent casualties in Iraq – Lance Corporal Kirk Redpath, 22, and Lance Sergeant Chris Casey, 27, – died when the Land Rover they were travelling in was blown up by a roadside bomb. More than 20 service personnel have died in Snatch Land Rovers, yet the MoD has no plans to take them out of service and replace them.

This, of course, we reported and it is interesting now to learn that some soldiers are considering action against the MoD over their continued deployment. 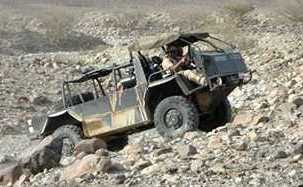 But, if the IOS and others are getting to grips with the deficiencies of the "Snatch" Land Rover, the greater scandal continues, as Booker points out, with the other variant in service, the WIMIK Land Rover – and also its partial replacement, the Supacat WIMIK, known in theatre as the "mobility vehicle", or simply, the "MV" (pictured right).

With responses to the Booker column and other source, we are beginning to discover that the nature of the problem is far more serious than we first imagined, but of a different order from the "Snatch". In the case of that vehicle, it came to our attention because of the high numbers of deaths arising from roadside bombs (IEDs) which were notified by the MoD. 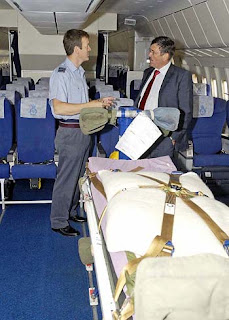 Although there have been a number of deaths in WIMIKs, however, the unreported tragedy of the WIMIKs is the much larger number of troops suffering serious injuries while riding in them - incidents which are not notified by the MoD. What we learn, though, is that 2-3 seriously injured soldiers are being evacuated every week in the specially equipped RAF Tristar transport aircraft, as a result of injuries sustained while riding in WIMIK Land Rovers.

It also appears that there are two distinct hazards. The first is from mine strikes, about which we have written, but the other is the lack of an armoured body, which makes it a magnet for the Taliban in a firefight or during other "contacts", which makes the crews vulnerable to rifle fire. 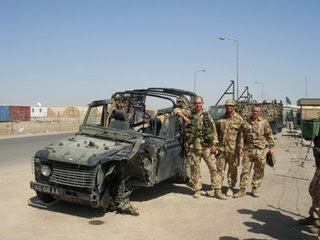 Staying with the mine hazard for the moment, under normal circumstances, the crew of a WIMIK will survive a mine explosion under the front wheel, as the vehicles do have limited underside armouring – and the hit, in the engine compartment, is some distance from the driver.

But, as one of our sources told us, the Taliban are "not stupid". The mines used have variable settings, so that they can be adjusted to detonate on the second, third or fourth "impact" and so they can be set to explode not under the front but rear wheels. This is presumably why, in the three WIMIK incidents of which we are aware, the (rear) gunners rather than the drivers have been killed or injured.

And, while the deaths are relatively uncommon, injuries are not. Here, as forces minister, Bob Ainsworth pointed out, the armour is allowing soldiers to survive when, previously, they would have been killed. But the price they pay is terrible injury, most often one or more leg amputations. 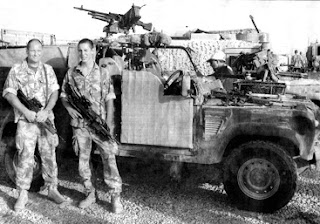 In terms of the rifle fire hazard, what is happening is that, where there are mixed vehicles in a convoy, some armoured and some not, the Taliban deliberately target the unarmoured vehicles, in the expectation of making an easy kill or of causing injury. And because the WIMIK is so often the most obviously unarmoured vehicle, the crews often find themselves the target of sustained, concentrated fire. Small wonder troops in theatre are seeking to add their own armour.

When it comes to exposure, however, not even the WIMIK compares with the new Supacat MV, where there is not only no protection from gunfire, there is no armour at all fitted to the vehicle by the manufacturers. In theatre, improvised armour is made available, in the form of Kevlar matting, which may give limited protection from gunfire but is largely useless against mine blasts.

Bought specifically for special forces in Afghanistan – but now to be issued more widely – quite why these grotesquely vulnerable vehicles were acquired remains a mystery. Branded by us as insane when it was first revealed by the MoD, it is not as if this was a British design or even intended as a fighting vehicle. 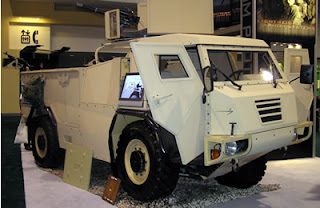 Although branded as a "Supacat" product, it is in fact built under license from Lockheed Martin which produces the vehicle for the USMC as a lightweight, high mobility gun tractor, known officially as the "lightweight prime mover". And even for this relatively safe role, the Marines have decided to provide armoured cabs (pictured).

Instead of buying direct, however, the MOD gave the contract to Supacat for 130 vehicles, rumoured to cost an eye-watering £250,000 each (six times the price of a fully equipped Land Rover) – as they did with the earlier Tempest contract. Dark rumours abound that the reason it went in this direction is that Supercat were in financial difficulties and this was the MoD's way of bailing out a preferred supplier. 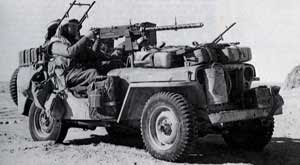 Be that as it may, as are the Taliban not stupid – neither are our own troops. They have reacted with amazement to the lack of protection. Some have come to the same conclusion that we have – that the MoD and Army are still besotted with the idea of roaming the North African desert in armed jeeps in the manner of the SAS founder David Stirling. But, as one of our sources, remarked, "Afghanistan isn't North Africa, and we're not fighting Germans".

As far as the MV goes, the consensus is that it is a superb cross-country vehicle. If you want an off-road experience on the Bovington tank range this is the one for you – but no amount of performance is going to save you from a mine, or a bullet.

Neither are the mechanics happy with the beast. Spares are difficult to get and even minor but vital modifications take an eternity. Engine access is poor and, to change the oil, you have to jack up all four wheels and unbolt two cover-plates to get to the sump. Even though there are very few vehicles in theatre, there are always three or four in the workshop awaiting repairs. It is the very antithesis of what is needed in this theatre. 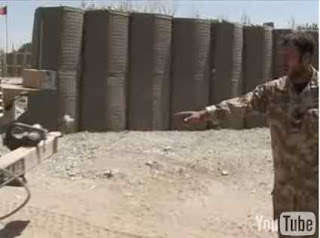 Out in the real world, troops do know what is good for them. As recounted by Vaughan Smith, soldier turned correspondent and recently returned from Afghanistan, they are heaping praise on the Mastiff. In a remarkable filmed interview on his blog, From the front line, he records a Corporal from the Royal Tank Regiment calmly recounting where his vehicle was hit by a mine. "Look," he says, pointing under the Mastiff, "you can see the slight blackening under the engine".

The MoD is relatively quiet about the merits of the vehicle, otherwise all the soldiers (and their relatives) would be demanding them. But, faced with an obstinate Army high command, and its refusal to divert funds from existing equipment programmes, only sufficient "new" money could be extracted from the Treasury to buy 108, split between Iraq and Afghanistan. 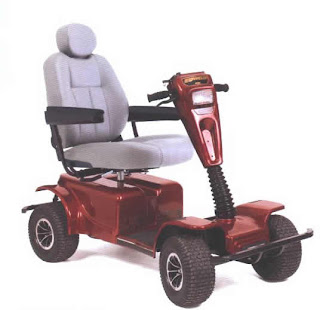 As a result, there are not enough of these life-savers to go round, "the safest vehicle I've ever driven," says Vaughan's RTR Corporal. So fierce is the competition to crew what few there are, one source told me he had witnessed fist-fights between soldiers as they vied for a seat in the only vehicle that they knew would get them back alive, with their legs intact.

So it is that the losers ride in WIMIKs. The really unlucky ones get to ride in Supacat MVs – odd how the name "mobility vehicle" also applies to those electric buggies, used by the disabled, which too many soldiers are ending up using for the rest of their lives. Yet, for the price of the 130 MVs, we could have had 65 more Mastiffs in theatre.

And, because the MoD bought these insane vehicles, while still relying on WIMIK Land Rovers as well, we will continue to have avoidable and culpable deaths - and wholly unnecessary injuries.