The tale of the Panther 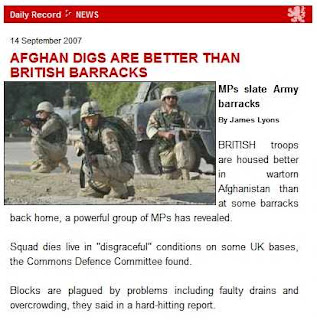 This week has seen the launch of a political campaign by the Services charity, the British Legion called "Honouring the Covenant", demanding better medical care, swifter holding of coroner's inquests into the deaths of those killed in action, and more generous compensation.

It coincides with a with a report from the House of Commons Defence Committee on Service accommodation standards, which claims that "troops are housed better in wartorn Afghanistan than at some barracks back home".

That message might have carried more conviction on one newspaper had the photograph accompanying the piece shown British rather than American troops – but there you go … nobody is perfect.

Both issues have been given an amount of publicity today, not least by The Daily Telegraph and the Independent, both these and other newspapers citing the case of Lance Bombardier Ben Parkinson received only £152,150 in compensation after receiving terrible injuries after being blown up in his WIMIK Land Rover in Afghanistan, after it had hit a mine. 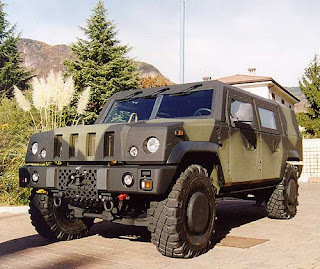 What got no publicity at all – and neither could have it been expected – was an industry "puff" released by BAE Systems, announcing the "trials success" of the Panther Command and Liaison Vehicle. However, while this might appear completely unconnected to the concerns of the British Legion and substandard accommodation, there are threads common to them all.

On the one hand, there is the failure of the Army to provide adequately protected vehicles, which would have prevented soldiers like Ben Parkinson getting injured in the first place and the second is the continued waste of money on equipment procurement, money which could be better spent elsewhere – not only on better equipment but on pressing needs such as better accommodation.

Turning to the Panther, this typifies the rot that afflicts the procurement process, with £166 million having been spent on 410 armoured vehicles which are essentially useless – certainly as far as current operations are concerned and even for the roles for which they were purchased.

The detail of the purchase has been rehearsed in numerous posts on this blog so suffice to say that, in the procurement competition where a selection was being made, the Panther was added after the short-list had been closed, in breach of the MoD's own rules and then chosen against better and cheaper competition.

The process was then defended by a Mr Andrew Simpson of Bath, who claimed to be the MoD desk officer who initiated the programme, which resulted in the procurement of the Panther vehicle and was "the only person to have been intimately involved in this programme from initiation to contract award." Mr Simpson then went on to forge a lucrative arrangement with the vehicle builder, Iveco, as a consultant. Now, with the shortlist having been drawn up on 15 June 2001 and the contract having been signed in November 2003 for a vehicle which was then already in service in the Italian Army (pictured, left), it has taken until this month for BAE systems to announce that it has "successfully passed its UK MOD reliability qualification trials". From June 2001 to now, that is, incidentally, a period longer that the entire Second World War.

The reason why, of course, that the vehicle is effectively useless is that it is primarily designated as a command and liaison vehicle, which means that – by definition – it will most often be carrying officers and high-value assets like command radios. Given its distinctive appearance, akin to an SUV, in asymmetric warfare where there are no front lines, it will almost certainly be specifically targeted by insurgents if it is deployed to either Iraq or Afghanistan.

Furthermore, although nominally a five-seater, by the time the radios and other equipment are fitted, the vehicle is down to three seats, which means it is too small to carry out its function. And herein lies a bizarre twist to the tale.

As originally specified by the Italian Army, for which it was designed, the key parameter which determined its overall size was that it should fit inside a Chinook helicopter. However, in the hand of the MoD, the vehicle is permanently fitted with a roof-mounted, remote controlled machine gun, which means it can no longer fit inside a Chinook helicopter. As we keep saying, you couldn't make it up.

What all this points to is that the MoD is a seriously dysfunctional organisation, one which a simple campaign by the British Legion and a report by the Defence Committee will hardly begin to address. But, in terms of priorities – as we also keep saying – worthy as these efforts are, we also need much more emphasis on keeping our troops alive and uninjured.

The tale of the Panther illustrates just how high a mountain we have to climb.