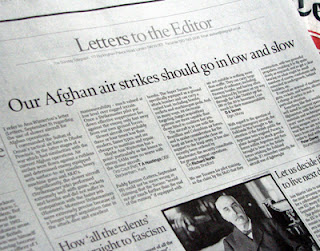 After the idiotic letter from Paddy Keenan last week in The Sunday Telegraph (still no link) – claiming that a Tucano with a bomb load "would not get much further than the end of the runway", we have no less than four letters in the print edition of the paper today – occupying the lead slot (no link).

The first is from Group Captain (Ret) Hastings, who commanded the Sultan of Oman's tactical air force in Dhofar Province in the latter stages of the war which, he writes, "had similarities with the current Afghan operations". He adds: "Air strikes were flown against a ruthless and determined enemy equipped with surface-to-air-missiles, heavy machine guns and AK47s."

Significantly, the slower aircraft (Strikemaster jets) performed extremely well with guns, rockets and bombs and did not suffer in comparison with the faster jets (Hunters). Moreover Strikemasters were extremely precise because of a longer target acquisition time in the attack dive and excellent manoeuvrability – much valued at low level over rugged terrain. Once a Strikemaster put down effective suppression fire against the enemy only feet away from our ground forces.

Slower aircraft cost probably three to four times less than modern, faster types, and are cheaper to maintain and repair. Maybe Ann Winterton has a point: particularly as the losses to enemy SAMs were no worse with slower aircraft. 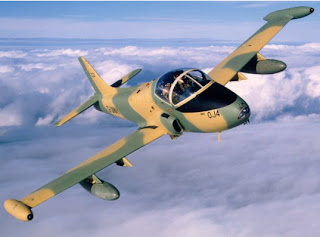 Interestingly, we referred to Strikemasters in this context in December last year, and again in March of this. It is no coincidence that this aircraft was based on the then RAF's basic trainer – the Jet Provost – as is the Super Tucano based on the RAF's current basic trainer.

With a letter from this author (here) and another supportive letter which attests to the Tucano's manoeuvrability, the final offering recalls the Argentine twin-engined Pucara ground attack aircraft, used in the Falklands. This is from Peter Davey of Bournemouth, who adds:

Something like that would seem well suited to current operations in Afghanistan, with the benefit of new materials and techniques and 30 years' more experience, to turn a losing weapon into a winning one. I trust that we are not too proud to learn from our old enemies, in order to deal with our new ones. 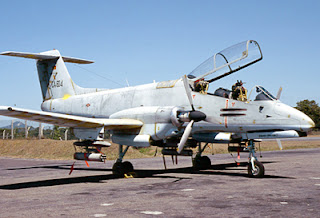 Great minds clearly think alike as we also noted this aircraft in December, to illustrate the concept of "a light, cheap ground attack aircraft."

Altogether, these letters make a significant contribution to the debate and, once again, it is notable that the debate is going on in the letters pages, rather than in the main newspaper. Although covered by specialist websites, once again the MSM has excluded itself from important defence issues.

On one point though, Group Captain Hastings is a little out of date – costings. With a Eurofighter at £60 million (at least) and a Super Tucano in the order of £4 million, the cost ratio can be as high as 15:1. Then, there is the cost of operations and weapons.

Even with its inflated overhead, it only costs the RAF £5,000 an hour to operate a Tucano, while the Eurofighter is estimated at £40,000 an hour. 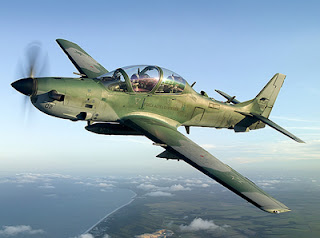 Then, one would expect the Tucano, with accurate, low-level delivery. to be able to use "dumb" bombs. On the other hand, to overcome the limitations of fast jets, we are seeing increasingly sophisticated munitions being used, the latest development being the focused lethality munition (FLM).

What we did not discuss in our piece on this weapon was the cost. Currently, it is expected to work out at £15,000 per bomb and, giving its confined effect, one could argue that more would be needed to achieve the same result that the Tucano could get, using two "dumb" bombs.

For the sake of argument, therefore, we could posit a Tucano completing a mission for under £10,000 (including the price of the ordnance) while a Eurofighter, using four FLMs, would come in at £100,000 – ten times the cost.

We would like to think that that was what Gen. Sir Richard Dannatt had in mind in his recent speech (which we said was far more profound than the media indicated). On equipment, he offered the following observations:

We also need to radically rethink the way that we think about our equipment. We need to start from the bottom by looking at equipping the man first and building the system around him. Too often we have been seduced by high technology, sometimes without really understanding what it can deliver or how it can improve our effectiveness.

If Dannatt cares to turn his mind to the cost and effectiveness of CAS, then he might find a useful ally in Air Chief Marshal Sir Jock Stirrup. In the earlier stages of his career, Sir Jock flew Strikemasters in Oman, on the very missions for which Group Captain Hastings thought them so suitable.