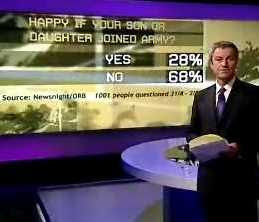 If you ever needed an example of how difficult it is to deal with such a complex subject as the state of the armed forces, yesterday's Newsnight special on the "Broken Army" is one such.

The programme opened with Gavin Esler setting the scene, as he intoned, "We expect them to fight for us, to kill and sometimes to die … so are we letting the British Army down?".

Much was made of the public attitude towards the Army, the programme opening with a survey which asked whether parents would be happy to allow their sons or daughters to join up. Only 28 percent said yes, while a massive 68 percent said no. That same survey had the majority believing that the wars in both Iraq and Afghanistan were lost.

However, the programme covered far too ambitious a range and, as a result, it no more dipped its toes into core issues and then left them dangling. Any one of a number of facets could have warranted programmes in their own right.

Having watched the programme twice now, replayed other bits for another look, and then transcribed parts, I have to confess that I am still none the wiser. Depending on your own viewpoint, you could take out of the programme what you want to hear, but you would really have no better idea of whether the Army was indeed "broken". 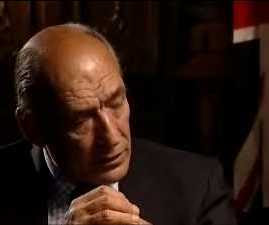 In one accepted that it was, and in any event, the lingering memory is of the carefully staged interview with former CGS Mike Jackson, whose recipe was simple: more resources. From the air, he plucked ten percent on top of the current £32-33 billion, which he thought "not unreasonable".

"More resources" was a theme we were to hear several times, with hints that the money should be spent on better accommodation, more compensation and higher pay.

Some of the more interesting comments, in fact, came from viewers who have e-mailed the programme, one in particular who complained of back-to-back operational tours, adding: "… when we are seeing so many deaths that could have been avoided if the politicians had provided the support to the military they take for granted themselves, it has a particularly bitter taste". 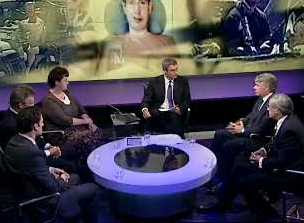 The centrepiece of the programme, however, was a panel which included the mother of Ben Parkinson, Lord Drayson and opposition spokesman, Gerald Howarth. Inevitably, therefore, the bulk of the discussion was dominated by the compensation issue, and an exchange between the two politicians.

What we did get from Drayson, though, was the stunning statement, that, "We need to do absolutely everything we can to make sure that we look after our service people both when they're on their service and particularly when they're injured." 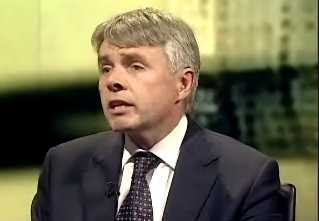 The claim was never to be properly challenged, although Gavin Esler did take on Drayson over the defence budget. But, it was not only a question of the absolute amount of money, said Drayson, "it is making sure we are spending the money on the right things…".

That brought the one and only interjection from Gavin Esler on equipment. "Protected Land Rovers," he said, "better armoured Land Rovers is one thing that came up a lot in our e-mails, and people are saying you are not spending it on the right things…".

Well, in the case of Land Rovers, rejoined Drayson, this was, "…something which we took action on at the beginning of this year. Investment in new protected patrol vehicles, for example the Mastiff vehicle which we designed and got into operation in 23 weeks …".

That, as far as equipment went, was it.

There were also two Army officers on the panel. One was a Major who was shortly to leave the Army because he had found the strain of operations too great. The other was Major General Sir Jack Deverell. Both only got walk-on parts. 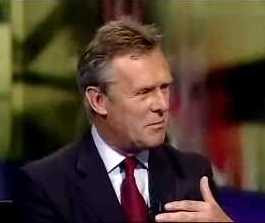 Deverell did try to confront the issue of fighting insurgencies, rehearsing the public perception that we were "losing" the wars in Afghanistan and Iraq, rehearsing the issue we have raised on this blog – that you cannot actually "win" in the conventional sense. That was one of the many things that could have made a complete programme.

Arguably, had the programme been better structured, it could have achieved more. It raised a thesis that the Army was "broken" but never really set out to give a precise definition what was meant by that highly emotive term. For sure, we learnt that it was over-extended, fighting two "major" operations with too few resources and inadequate manpower, but those charges were effectively taken as given.

All this, though, takes the Army at its own estimate. In fact, in terms of operations, we have committed only just over ten percent of the Army manpower – effectively two reinforced Brigades, while, although we have only the 22nd largest in the world by number of troops, the British Armed Forces have the second highest expenditure (only behind U.S.) of any military in the world.

Clearly, there is something of a mismatch here. One factor may be, as we have suggested on this blog, that the Army is keen to keep its basic force structure intact, even while conducting its overseas operation. Another is the huge level of misspending and budgetary waste, one example of which we offered recently, where the MoD has spent £300 million on not buying a new light tank.

However, such issues were barely touched upon, if at all. On reflection, though, it would it too much to expect the BBC to address its own thesis in a coherent manner. A "broken Army" we may have, but the case has not been made, much less on how to fix it.