The major news agencies, the BBC and others are all reporting that the British retreat withdrawal from Basra Palace has begun, guarded by hundreds of Iraqi military reinforcements. The operation is expected to take several days.

This is the last base in Basra proper and the 500 troops are to be redeployed to Basra Air Station, five miles to the west of the city, pending their return to the UK. Then, it is widely expected, the control of Basra province will be handed over to the Iraqis, following which troops numbers will be reduced even further.

The Sunday Times leader today thus writes that after 168 deaths, "the government is lacking the political and military strength to go on sacrificing soldiers in the Basra meat grinder." It adds:

Better to fight in Afghanistan, where the mission and the enemy are more clear cut. Under cover of handing over to the Iraqis, and with the added grace of a six-month Mahdi Army cease-fire, we are preparing to get out. Clearly, deals are being done behind the scenes that do not bear close scrutiny, including the release of notorious members of the Shi'ite militias and the acceptance of Iranian cross-border involvement.

So it is that the once victorious troops, who entered Basra with such high hopes in May 2003 and, for a short period, patrolled in soft hats and without armour, have been rocketed and mortared out of their last but one base. But, with the side deals with the Shi'ia - which has included the release of 26 terrorists, the departure comes not so much with a bang but with a whimper. 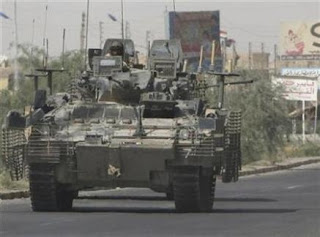 Any which way the government attempts to spin it, Basra province – the oil resources of which contribute 80 percent of the Iraqi economy – is beyond the reach of the Baghdad government, now the domain of warring tribes and the playground of the Iranian Revolutionary Guard.

Only the British and other coalition troops have stood between them and outright civil war and, with the last remaining 5000 troops hunkered down in Basra Air Station – barely a sufficient number to provide for their own defence, there is nothing to stop the militias taking over.

If the Shi'ia leaders and their Iranian backers are sensible – which they have not so far been – they will keep the level of violence down. This is the surest way of ensuring a rapid departure of the remaining British.

Then they can let chaos reign, in the manner of Lebanon, the West Bank or Gaza, murdering each other rather than British troops. And since that seems to be the only thing the Arabs seem to be good at, we might just as well let them get on with it.

I am also posting this on on EU Referendum.