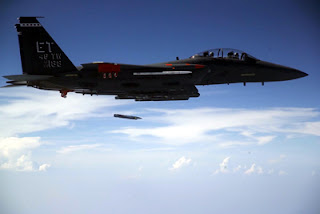 Such is the language of war: a new term has entered the vocabulary, brutal in its technical bluntness but one which, on the face of it, represents an enlightened concept. It is one that could have far-reaching implications for counter-insurgency operations, but it also has some disturbing implication.

The term itself refers to the "Focused Lethality Munition" (FLM), the second successful test flight of which was announced recently. Translated, it means a small bomb with what is described as an "enhanced blast, ultra-low collateral damage warhead and pinpoint accuracy". It is specially designed for use in sensitive areas in order to minimise the risk to nearby personnel or structures, thus reducing "friendly fire", the killing and injury of civilians and damage to buildings.

To achieve its effect, the bomb itself is small (250lbs as opposed to the more usual 500-1000lb) and the normal steel warhead casing is replaced with a carbon fibre composite. Enhanced blast explosives are then used, the overall effect being to eliminate warhead fragments and increase power. Instead of that power being expended on fragmenting the steel casing – often with a lethal effect at distance as shrapnel is ejected – it creates a smaller, contained but deadly blast area. Combined with high accuracy guidance, this means that the weapon can be used for close air support and on targets where civilians might be in the vicinity.

This particular variant is the latest in a range of such weapons in a long-running and expensive project – now costing the US taxpayers in excess of $1 billion – which is particularly favoured by the USAF as it enables warplanes to carry four times the number of weapons normally carried on a fast jet like the F-15E.

We first wrote about this concept two years ago, with some approval, and again more recently, when we were concerned at the growing toll of civilians killed by airstrikes in Afghanistan. 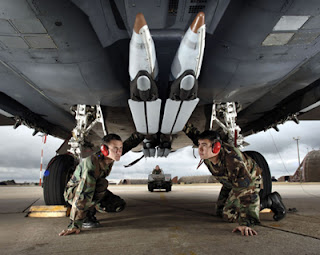 However, while the "focused lethality munition" – as a technological development – is to be welcomed as a genuine attempt to reduce collateral damage, there are disturbing aspects to it which makes one wonder about its true value.

The weapon itself has a standoff capability and, from high altitude can be delivered from a range of more than 40 (some quote 60) nautical miles. This, in a sense, reinforces the detachment of the aircraft pilot from the land battle, raising a spectre of a aircraft orbiting at high level distant from the action, the pilot punching in GPS co-ordinates (or the bomb even receiving them automatically). This relegates the pilot to the status of a high-tech delivery driver.

In a way, of course, this is not different from artillery or other long-range indirect fire. In fact, if aircraft are fitted with with "Sniper" (or similar) targeting pods and are able to beam down pictures to FACs equipped with "Rover" terminals, the pilots are more closely involved in the decision-making. With positive identification of targets, the risk of "friendly fire" is that much reduced.

Nevertheless, there is much more to close air support (CAS) than "visiting firemen" in super-fast jets delivering ordnance at the behest of forward air controllers.

In his book on the A-10 and the CAS debate, author (and former A-10 pilot) Douglas N. Campbell wrote of the loiter capability of the aircraft – its ability to fly over the battlefield for extended periods of time. This, itself, had a significant effect on the behaviour of enemy forces in the first Gulf War, to such effect that they were deterred from mounting attacks in case they attracted the attention of the aircraft.

Also, we hear from diverse sources that, in Afghanistan where fast jets (and even helicopters) may take 20 minutes or more to reach a battle area after being summoned, the Taliban have learned to hit coalition forces fast and then clear the area before the support arrives. Thus, CAS aircraft which are able to loiter over the area act as a deterrent to attack and, should a firefight develop, they are on the spot, able to "read" the battle and intervene quicker – often, as a result, more effectively. As Campbell writes, citing Vietnam Skyraider pilots:

…if you want very fast time response … you can't get it with speed, because you're always too far away. If you're on the ground it's too late … you can have an airplane go Mach 3 and it's still too late. The only way to get a super quick response time is to be in the air loitering, and checked in with a FAC … you need three to five minutes response time … come any later and you might as well have not come.

Interestingly, an earlier and less potent version of this bomb was first deployed in Afghanistan this year by an F-15E from a squadron that had previously been equipped with A-10s – dedicated ground attack aircraft.

One senses, therefore, that we are in political territory. The A-10 has had a battle to survive in an Air Force which has always resisted the idea of a dedicated CAS aircraft. In the small diameter bomb, it has found a technological "fix" that will – in theory – overcome some of the limitations of its favoured fast jets and permit them better to carry out ground support missions, thus enabling it to dispense with CAS aircraft.

No amount of technology, though, is going to overcome the inherent limitations on range and endurance of these fast jets (other than maintaining equally expensive and wasteful fleets of air tankers) and, while they may be able to deliver ordnance with increasing precision and capability, they will never be truly part of the land battle.

The irony is that a slower, dedicated CAS aircraft can not only be part of the battle but can fly lower. They are thus able to deliver small – and vastly cheaper - "dumb" bombs with a precision that still cannot be matched by the current generation of guided bombs. As we know, A-1 Skyraiders in Vietnam were able to put down bombs on enemy soldiers 50 feet from "friendlies".

Ostensibly a good idea, therefore, these small diameter bombs may actually distort the politics of CAS and ensure that ground forces are not given the equipment they actually need, supporting as they do, the air force obsession with fast jets. Those may be delivering "focused lethality" but the lethality may be more directed at dedicated CAS aircraft.