The debate that never happened 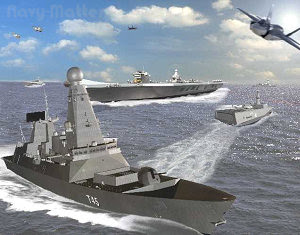 Lead headline on the front page of The Sunday Telegraph today is, "Labour's secret plans to slash the Navy".

The deadly duo, Melissa Kite and Patrick Hennessy, thus report that Ministers have drawn up confidential proposals to slash the number of ships in the Royal Navy, accompanied by the inevitable, self-referential puff: "The Sunday Telegraph can disclose."

We are told by way of substance that the MoD "has produced a plan to decommission five warships from next April, which would reduce the Navy's capability to the level where it could carry out only 'one small-scale operation'".

Furthermore, separate documentation from inside the department suggests that the total number of ships in the Navy and Royal Fleet Auxiliary could fall from the present level of 103 to 76 in 2017 and only 50 in 2027 — a reduction of more than half.

The source of the Telegraph's information is an email "from a whistleblowing official inside the MoD", who, we are told, "has given details of a row between senior officials in the department and Andy Burnham, the Treasury Chief Secretary, over the allocation of money to the MoD over the next three years."

This – as the paper points out – is all about the Comprehensive Spending Review and while it would be easy to get worked into a lather about the Telegraph’s piece, the leak almost certainly represents part of the continued inter-service in-fighting that occasionally spills over into the public domain. We saw something of this in February when the First Sea Lord, Admiral Band, complained that the "cuts" threatened to put the Royal Navy on a par with Belgium.

Dominating the defence settlement, however, is the enormous sum allocated to the Navy's wet dream, the two new carriers, cited at £4 billion. This means, according to the "leak" that savings have to be found elsewhere if the MoD were to meet its "operational commitments." Thus, in order to maintain the commitment to two carriers, "decommissioning of five ships (frigates and destroyers) from April next year has been considered." 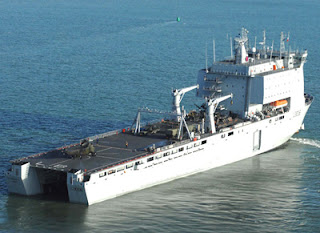 So much for the detail – such that it is – which brought a standard denial from an "MoD spokesman", who said: "No decisions have been taken to make changes to force structures. As ever, we continually review the defence programme."

Inevitably, though, we get the "renta-quote" from the opposition spokesman, in this case Liam Fox, the shadow defence secretary. He delivers to spec, declaring for the benefit of the paper, "Any reduction in our forces' size at present would be insane, given our unsafe world and the level of our current deployments. No wonder there are suggestions Gordon Brown is considering a complete withdrawal from Iraq. His own cuts to our Armed Forces may leave him with no option."

What comes over here is the ritual nature of the protest. There are all sorts of issues here, but not everything so straightforward. To take but one detail, we read that "the number of landing vessels would be cut from eight to six," which, on the face of it, looks like a serious reduction in capacity.

However, the new Bay Class Large Amphibious Landing Ships (example pictured above) have twice the capacity of their predecessors and, in terms of communications and equipment, are far more advanced. With improved reliability, better all-weather performance and "hot-crewing" (changing over crews while the ship is still on station, instead of it coming back to port), the "cut" actually represents a significant enhancement in capability. 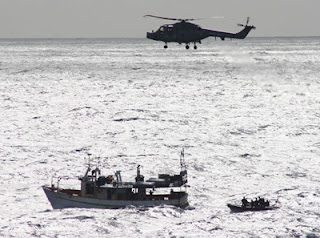 Furthermore, in terms of the asymmetric warfare that we are conducting, and such tasks as drugs interception patrols, there is a blurring of roles between what might have been carried out by a traditional warship such as a frigate, and other ships. Thus, we not only see the helicopter carrier, HMS Ocean carrying out drugs patrols, but also the Royal Fleet Auxiliary fast fleet tanker Wave Ruler. Embarking a Royal Navy Lynx helicopter, it has had considerable success in this role (illustrated).

Thus, simple "head counts" of the numbers and types of vessels on charge is no indication of either capability or suitability. We need a far more adult debate about what we want the Royal Navy to do, and what ships and other capabilities it needs to discharge its functions.

Yet, when it comes to a debate, the last time we heard anything serious from Liam Fox was in May last year, with nothing of the serious analysis that our own readers pointed out was necessary. Not is it for want of opportunity. In the run-up to the Conservative Party conference, the Sunday Telegraph gives generous space to an interview with shadow defence spokesman Liam Fox. And the one thing he does not mention in his entire interview?

You guessed it. Defence.