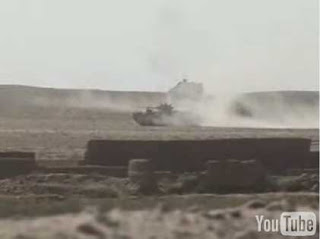 British milbloggers are few and far between, but an important gap is being filled by Vaughan Smith, ex Guards officer turned journalist. He has been embedded in Afghanistan and is turning out a series of illuminating video reports on the superb Front Line blog, giving a unique and much needed insight into operations there.

In one of his latest posts he brings much awaited news – not seen in the MSM – of the arrival of the first deployment of Warrior MICVs to Gereshk in Southern Afghanistan.

This, writes Smith, is what the military would call "proper armour": a company of Scots Guards, called the Right Flank, who arrived in a large sand-cloud with more than 20 Warriors.

Announced in February, it is about time the armoured vehicles arrived. In a campaign where much of the fighting is closer to conventional warfare than counter-insurgency, we have seen classic infantry assaults on Taliban compounds, for which the Warrior would be ideally suited. 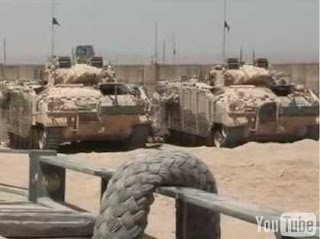 To date, however, the Army have been reliant on WIMIK Land Rovers for their fire support, with the occasional intervention of Scorpion light tanks which, with their 30mm Rarden cannon, have been regarded as a "battle winner". For armoured personnel carriers, troops have been reliant on the undergunned Viking – retained from the Marines – and, more recently, the Mastiff, which was never intended as an assault vehicle.

Now, with the arrival of the Warriors, we have a vehicle which is actually better armoured than the Scorpion yet shares the same 30mm Rarden and can carry eight infantry into battle.

The Warrior has been a familiar sight in Basra, where its firepower and tracked mobility is largely wasted and where its armour, designed for conventional warfare, still leaves it vulnerable to IEDs.

In the wide open spaces of Afghanistan, it will find its true home and will provide a very valuable addition to the armoury. But, with more than six months between the announcement and their deployment, we can only wonder what took them so long.