Is there a politician in the house? 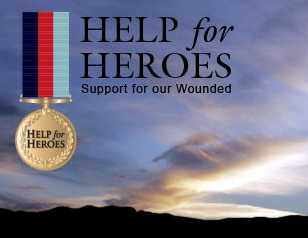 There is nothing inherently wrong with charities taking a hand in the welfare of our troops – far from it. Very often, such organisations can be more responsive, more effective and more efficient that the bureaucracies of government departments. Furthermore, the charities themselves give the public the opportunity to show their appreciation for our troops, in a direct and practical way.

Thus the launch of a new charity Help for Heroes by cartoonist Bryn Parry, who served in The Royal Green Jackets, is only to be welcomed. And, as a determinedly non-political charity, the first tasks it has set itself are to build a gym and full-sized pool at Headley Court rehabilitation centre in Surrey, to assist the "growing number of wounded UK service personnel".

Similarly, the Royal British Legion - best known for its annual "Poppy Appeal", which launched its "Honour the Covenant" campaign last month, again dedicated to better welfare provisions for our troops, improved compensation for the wounded and more care for the families of Service personnel.

There is certainly plenty of work for these charities to do, but not least of their activities is to shame the government into taking more action, to which extent there is a definitely a political edge to their involvement.

However – and necessarily – there are limits to the degree to which they can involve themselves in political issues and the line has been firmly drawn, leaving on one side the welfare issues but on the other – in the untouchable category – "operational" issues such as the suitability of equipment and its sufficiency, and decisions relating to its deployment.

This has the effect, therefore, of positioning the charities of being concerned for the dependants of the dead and the welfare of the injured. But they cannot concern themselves with the fit and healthy and the measures necessary to keep them that way. Such issues are "too political".

If that is the way it is to be, however, this places a huge responsibility on the politicians, whose trade is – in theory at least – that of politics. Their task must be to cover the whole territory, which must include the operational issues that the charities cannot (and should not) touch.

Unfortunately, as my co-editor has observed recently, and I have commented upon before, on these vital issues the politicians have effectively departed the field of combat. 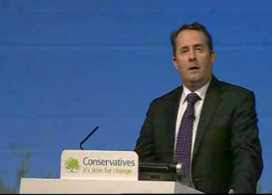 Of this, no better example could be found than today's speech at the Conservative Party Conference by Dr Liam Fox, the Party's shadow defence secretary, who delivered his thoughts this morning in a presentation which could, to a very great measure, have served any number of charity representatives.

Headed, "We need a Government that honours our Armed Forces," this was hardly a suitable lead for a man who seeks to become not a minister representing the Armed Forces but one entrusted with the defence of our nation and its interests.

Yet, in "charity mode", his offering immediately led to a description of a meeting with "a young man in a hospital who had just returned from Afghanistan with horrific injuries." As a doctor, Fox says, "I marvelled at his physical bravery…".

Then we get the "service families living in miserable accommodation" and the "veterans in homeless shelters", which takes us into a polemic about "unhappy personnel" and "unhappy families" before moving on to discussion of the compensation scheme for injured soldiers and thence to the delay in holding inquests for dead soldiers.

We are well into the speech, therefore, before Fox even begins to address the issue of equipment, but then he goes for the populist gibe about the Coroner’s comments on Sgt. Roberts's body armour – an issue which was resolved even before the inquiry was held.

It would be otiose now to fisk every word of Fox's speech, other than to note that all the usual mantras re-appear – the allegations of "cuts" (despite their arguable nature), and of "overstretch" (heedless of the inefficient way our forces are deployed), together with a promise of "a bigger army" but without any commitment to increased funding.

Yet, if Fox is to pay for the two new carriers (and their hugely expensive aircraft) totalling perhaps £20 billion, the introduction of FRES at £16 billion and all the other expensive projects in the pipeline, how is he going to find the money?

Skating over such a minor detail we return to "smaller things" like seeing "more service men and women in uniform in our towns and cities", and seeing them "properly welcomed home", and the development of "proper psychiatric services", and so on.

While it would be unreasonable – in a conference speech to the faithful – to expect a detailed exposition of the Conservative's strategic vision, one could expect some clues as to the underlying principles and the direction of defence policy. As it was, we saw none. Had there been a medical emergency in the conference hall, no doubt Dr Fox the GP could have volunteered his services, but had a cry gone up, "is there a politician in the house?", answer there would have been none.