All you could ever want 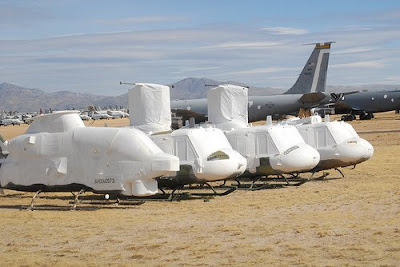 It is revealing how, for all the resources and "skills" of the serried ranks of hacks, it takes a reader's letter to make the obvious suggestion to resolve the helicopter shortage in Afghanistan.

Thus does Huw Baumgartner write in the letters column of The Sunday Telegraph as follows:

There is a way to increase helicopter capacity in Afghanistan with relatively small expense. There are dozens, if not hundreds, of utility helicopters mothballed in the Arizona desert. If our American allies want greater support, they could reactivate a number of these and loan them to us.

Mr Baumgartner then goes on to write that there are probably sufficient serving and reserve military helicopter pilots to man a squadron for basic logistics flying. In the longer term, he says, more pilots could be trained on a basic, no-frills course, such as used to be run by the Army Air Corps.

Certainly, he is absolutely right about there being hundreds of mothballed airframes available but, whether they could be re-activated and brought to theatre standard at a reasonable cost is arguable. But the general point is sound, in that it would be perfectly possible to upgrade a number of airframes (from diverse sources) to relieve the shortages.

That, as we pointed out in March 2007 was precisely what the Iraqi Air Force was doing, the same option also being taken by the Canadians in July 2008, now almost exactly a year ago. It is even an option adopted by the cash-strapped Philippine Air Force.

What Mr Baumgartner does not realise, perhaps, is that if the Bell airframe was used, the training needs and support are considerably eased, as RAF pilots train on Bell 412s (and operate them in Cyprus) and the Army operated 212s in Belize and Brunei.

Furthermore, with the USMC operating alongside us in Helmand, and operating a similar type, it would be quite possible to tap into the Marines' logistic and maintenance programme, as indeed we do, informally and formally, with other kit in theatre.

What continues to make this an issue is that the despatch of six Merlins to theatre at the end of the year, with two or more additional Chinooks some time next year, plus the re-engined Lynxes, whenever they arrive, are not going to resolve the problem. For a fully mobile and flexible force, much more is needed.

What is doubly interesting is that the Armed forces suffered just as great a helicopter shortage in Iraq with similar devastating effect, this being discussed at great length in a debate in the Lords inJune 2006 but the issue gained no political traction and the media did not follow it up.

In my book, Ministry of Defeat, I make the point – with some force – that the lack of media engagement in the Iraqi campaign was in part responsible for the lack of resource. Had there been the same media frenzy over helicopters back in 2006, with strong political engagement, the government would undoubtedly have been forced to take some action then.

As it was, the totemic issue then was Snatch Land Rovers and, like the bear with a very little brain it is, the media could only handle one issue at a time. Then it was "protected vehicles". Now, with the need for more such vehicles just a pressing, helicopters are the dominant issue, with the vehicle problem being largely ignored. As for UAVs and surveillance systems, they are not even on the radar.

Even then, as Huw Baumgartner's letter illustrates, the media are addressing the helicopter issue at a dismally superficial level, "troops 'n' helicopters" acquiring much the same totemic significance as the "schools 'n' hospitals" mantra that has dominated the domestic political agenda.

Thus, we Christopher Leake wittering away in The Mail on Sunday about the Danish Merlins not being sent to Afghanistan two years after they have been bought. We did it better last week and comparison between the two versions readily demonstrates that Leake has only got half the story. He has little idea of what has really been going on.

To be fair, in-depth treatment is probably not the Mail's style. The issue cries out for the sort of investigative skills for which the Sunday Times used to be famous. In that paper today, however, we get a two-page spread on the experiences to two "blood brothers" in Afghanistan.

Short on detail but long on "human interest" it contributes nothing to the overall welfare of "Our Boys" or the more effective prosecution of the campaign. Without that greater significance, this is no more than cheap exploitation verging on voyeurism, no different from The Sun which forever lauds Our Brave Boys yet fails to use its considerable power to make their lives better and safer.

Would that they knew it, if the media really took the time out properly to research and understand the issues, and then went out of its way to inform their readers, then the traction so gained would go a long way towards forcing the government to take effective measures to resolve the real problems.

To that extent – and to my certain knowledge – many of those in power would actually welcome informed, well-directed criticism, not least because it would strengthen their hand against the vast ranks of vested interests which have their own agendas, in pursuit of which they expend vast capital in briefing an idle and gullible media.

One could avow that, had the media followed the helicopter issue from the start, had it picked up the game-playing and the internal politicking going on in the MoD and elsewhere, had it followed the Parliamentary debates and the many written questions on the issue, and had itself done its own research - and then undertaken a well-informed campaign - the current situation would be very different.

However, we remain with problems that are solvable but which are never addressed, simply because the media has vacated the field.