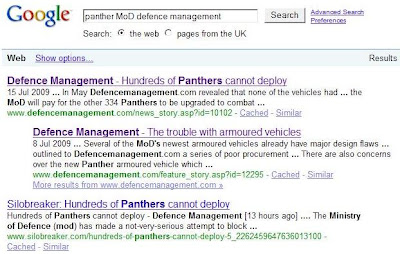 One of the things that is possibly upsetting the defence establishment is this blog's pursuit of the story about the Iveco Panther – the latest development I have been sitting on, while other more pressing issues were dealt with.

As it stood, we had found that this absurdly expensive machine, ordered in 2003 at a cost of over £400,000 each, had to be converted at an additional cost of £300,000 to make them suitable for use in Afghanistan, bringing the price to well over £700,000 each for a four-seater protected patrol vehicle.

However, we had also established that only 67 of these vehicles were being put through this conversion process, leaving 334 from the original batch of 401 that are basically unsuitable for deployment. Thus, it was left to Ann Winterton to ask what was to happen to the rest.

Answer there came from Quentin Davies that the remainder would be used for pre-deployment training individual and collective training, and trials and development. Never in the field of human conflict, he might have observed, have so many been used to train so few.

The more serious point is that, while the Army is crying out for protected vehicles, we have these useless machines stuck at home, when a fraction of the cost could have bought decent protected vehicles and had them in theatre.

Apart from Booker, however, only Defence Management was taking an interest in this procurement disaster. The rest of the media, so full of faux concern for "Our Boys" isn't interested in getting its hands dirty and actually reporting what is going on.

But then, an in-house cock-up by the MoD does not fit the narrative. Unless the story is about Gordon Brown and his "penny pinching", leaving "Our Boys" without the kit they need, the popular media does not want to know.

It is actually too much to hope for a responsible media though. Even if the story was handed to it on a plate, it would probably get it wrong and, if anyone gets near reporting the truth, we see the result .

However, one of the pieces can still be found on Google cache. This is what you are not allowed to see:

The MoD has spent hundreds of millions of pounds on a new armoured vehicle that will mainly be used for training in non-operational settings.

Only 67 Panther armoured vehicles are in suitable condition to operate safely in Afghanistan according to the MoD.

Yesterday the minister for defence equipment and support Quentin Davies admitted to MPs in a written answer that 334 of the Panther armoured vehicles "will be used for pre-deployment training, individual and collective training, and trials and development."

The Panther Command and Liaison Vehicle (CLV) was procured earlier this decade to provide commanders and combat support services with better protection when they are on the battlefield. At £400,000, it will undoubtedly serve as one of the most expensive Army training vehicles, ever.

The vehicle has been riddled with problems from the outset, resulting in just 67 being available for Afghan operations due to a lack of capability requirements.

In May Defencemanagement.com revealed that none of the vehicles had originally been delivered with the required capabilities for Afghan operations, despite extensive field tests in Afghanistan earlier this decade. As a result, procurement officials were forced to spend an additional £20m upgrading just 67 vehicles.

This resulted in further delays to a programme that was already running over a year late.

The vehicle additions included a better protected engine compartment, the addition of Electronic Counter Measures (ECM) equipment, air conditioning and adding space for a fourth crew member to the vehicle.

Richard North, author of "Ministry of Defeat" said recently that the Panther "is a fine modern product of the Italian automobile industry, and therefore completely unsuitable for military use."

The outer portion of the vehicle, when hit by an IED or landmine is likely to be permanently damaged.

According to a National Audit Office Report, the MoD originally planned to buy 486 of the vehicles but due to "affordability" issues, was later forced to reduce the order to 401 Panthers. It is not clear whether the MoD will pay for the other 334 Panthers to be upgraded to combat standards.

As the threat from IEDs and landmines has grown, so has the demand for better protected vehicles. Ministers insist that they are sparing no expense in ensuring that troops have the best protection money can buy. However problems with the Snatch, Vector, Viking, Jackal and now Panther, leave these claims in doubt.

Even this fairly anodyne report, however, is too much for the defence establishment. It is far more important to stifle criticism than to protect "Our Boys" from getting murdered by the Taleban. In one of the more recent strikes, they only pulled the top half of the driver out of the vehicle. There was nothing else of him left. But hey! Dead soldiers tell no tales.