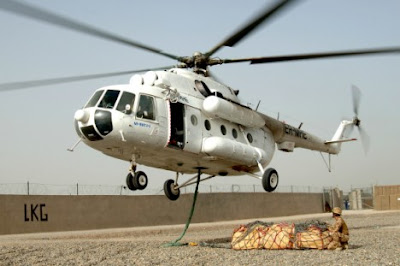 There is a report today of another Russian helicopter going in, an Mi-8 – this one at Kandahar, sadly with at least 16 deaths. Enemy action is not suspected.

The operator was the Russian air company Vertical-T, another of those dodgy Skylink "partners", although there is no information yet as to whether this was running a Nato or British contract. It could have been, but it could also have been ferrying for an NGO or other outfit in the region.

Meanwhile, in a lazy, ill-informed article by Christopher Leake in the Mail on Sunday, we see the paper wake up to part of the story about civilian contractors supplying helicopter lift to the MoD in Afghanistan.

Under a plainly wrong headline, which declares: "Now we are borrowing Russian helicopters to fight the Taliban", we get Leake proclaim that "British frontline troops in Afghanistan are so short of helicopters and transport planes that they are being bailed out by the Russians."

Actually, we may be using "Russian" helicopters (although the new models are not built in Russia) but there is no direct Russian involvement in the helicopter supply. As we know, the contract is held by the Canadian firm, Skylink, which then subs out to all manner of operations.

In typical Mail style, pompous and self-important, however, we get this piece of information dressed up as "The Mail on Sunday has established that the Ministry of Defence is using civilian Russian-built Mi-8 and Mi-26 transport helicopters ... ".

All the key information here, and much more of which the Mail is evidently unaware, has actually been announced in Parliament or tabled as responses to Parliamentary written questions, starting with an oral statement by Des Bowne on 20 May 2008, with a question from Dr Fox on 2 June 2008, followed by two questions from Ann Winterton, on 25 March 2009 and 20 April 2009 respectively.

And, for all Leake's hyperventilation, he completely misses the main story about the Mi-26 going in, fact that it was shot down and the very shady history of the operators. All Leake can manage is, "The pilots are freelance Russians and Ukrainians." No doubt, he calls this journalism.

And the thing is, in missing the real story, Leake is making drama out of a non-story. It makes absolute sense to augment lift with suitably qualified and reputable civilian operators. It is cheap and highly flexible. The MoD should be commended for saving taxpayers' money - it took them long enough.

But then, Leake even makes a big deal out of the fact that we are hiring "massive commercial Russian Antonov aircraft to fly vehicles and heavy equipment from RAF Brize Norton in Oxfordshire to Afghanistan." And the point is? Everybody uses these aircraft, even the Americans. They are simply the biggest in town ... chartered from perfectly reputable operators, including several based in the UK. And if he looks at some of the MoD press handouts, he will see pics of Antonovs, going way back, with military kit being loaded on them.

For his "scoop of the week", however, Leake has picked up bits of information about the use of Mi-8 MTVs by Special Forces. But, he tells us, they are being used "because of a desperate lack of UK aircraft." Er ... nah! They are being used because they are the best aircraft for the job – and very successful they have been.

Then Leake tells us they are "on loan" from an unspecified "Third World nation". Er ... nah! The RAF bought six of them in 2007 (or could be a bit earlier) – there are five left. We may occasionally "borrow" others, but then that is normal in the theatre. The Yanks operate them as well – anonymous machines, camouflage-painted and no markings, just like ours.

To add to the mystery, Leake embellishes what little detail he has with the legend that they are flown by an elite team of UK Army Air Corps pilots, trained at a secret special forces base in Afghanistan. Er ... nah! In the main, they are flown by serving RAF officers. And they train in Boscombe Down, where two machines are kept for "evaluation" purposes. For sure, the pilots do theatre-specific training when they get there ... as do all operational pilots.

To Leake, though, this is a "humiliation" and he gets some talking heads – anonymous, of course – to say they are "dismayed" about being forced to borrow helicopters.

At times, you can understand the MoD's reluctance to tell the hacks anything. They will only get it wrong, or "spin" it. Clearly though, the best way for the MoD to keep things secret is to get the defence secretary to announce them in Parliament. Hansard, websites and Google are clearly beyond the reach of Mr Leake.