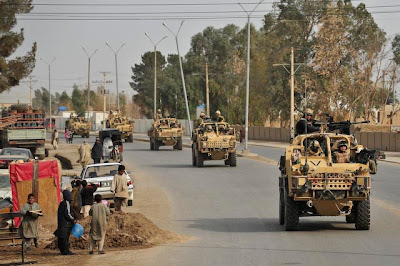 It seems otiose to record with any more emphasis than all the others, that another death has occurred – according to the Sunday Mirror - in a Jackal, this one an as yet unnamed soldier from 40th Regiment Royal Artillery.

The death, again from an IED, occurred yesterday in the Lashkar Gah district and we know little more, other than two other soldiers were also injured in the incident. This brings the total British service personnel killed in Afghanistan to 189, of which KIAs amount to 158.

Eleven soldiers have now been killed in a Jackal, with an estimated 53 killed in five types of vehicle, which also include the Wimik, Viking, Vector and Snatch Land Rover.

What makes the vehicle deaths different, if not special, is that – to a certain extent within technical limits – these are preventable. By using the Mastiff as a comparator, in which there have been no deaths, we can aver that if the range of vehicles in which deaths have occurred had been protected to a similar level, then all these soldiers could still be alive.

As such, "preventable" deaths take on a special significance, which marks out the toll extracted by the Taleban in this category. That is not to say that other deaths were not preventable, and perhaps by different technical means, such as persistent video surveillance of routes frequented by food patrols, to warn of possible IEDs. However, vehicles present a relatively more clear-cut issue, which tends to focus concern on them.

What must also feature in the vehicle category, as well as the human cost, is the financial burden, partly identified by the Independent on Sunday yesterday.

This paper recorded that there had been a steep increase in claims to the Armed Forces Compensation Scheme (AFCS), which covers injury, illness and death caused by service since 6 April 2005. The value of lump-sum settlements of claims settled under the scheme has risen from £1.27m in its first year of operation to £30.2m last year. But the awards also come with ongoing "guaranteed income payments" costing more than £100m.

MoD figures show that at least 218 soldiers have suffered "life-changing injuries" since April 2006 alone – and more than 50 personnel have undergone amputations following injuries.

The latest MoD analysis shows that, of 53 personnel who were seriously injured in Afghanistan in 2006 and 2007, 41 made claims to the AFCS. Only one of the 23 personnel very seriously injured (VSI) in Afghanistan during 2007 failed to make a compensation claim. The MoD has reported 214 casualties, including VSIs, during Operation Herrick since 2001.

The casualties contribute to an MoD benefits bill which shows spending of more than £1bn a year on war pensions to veterans or their families. The bereaved partner of a member of the armed forces killed in action is entitled to a pension averaging £100 a week.

To these costs must, in the case of a vehicle incident, be added the value of the vehicles, many of which are total write-offs, costing upwards of £700,000. Then there are evacuation and medical costs, and then the cost of replacing the casualties. This week it was announced that 125 extra troops were to be flown out to theatre to replace losses.

No single – even if notional – figure has been calculated to represent the average loss incurred when a British soldier is killed in action, but a US study indicated that the death of a four-man crew of an up-armoured Humvee cost the US taxpayer some $25 million. On this basis alone – irrespective of the human cost – it makes sense to provide a high level of protection for mounted troops.

The Jackal, being a relatively new vehicle in theatre should be up to the challenges posed by Taleban weapons but, clearly, it is not.

That the families should have to bear the burden of the loss, that precious lives should be cut short and that so many soldiers are seriously injured is bad enough but, when the taxpayer also has to pay serious amounts of money as well, this adds further weight to the call for better vehicles.

Unfortunately, if money was the solution to better protection, the increasing costs of vehicles would assure us a reduction on the casualty rate, but in the British inventory, expense cannot be equate with protection, when one of the most fragile is the Viking at £700,000 with the Jackal 2s working out at over £400,000 each.

One would hope that, with a cash-strapped government, therefore, if it is not moved by humanitarian concerns alone, hard-edged economics might take a hand leading the financial analysts to conclude that we simply cannot afford this attrition.