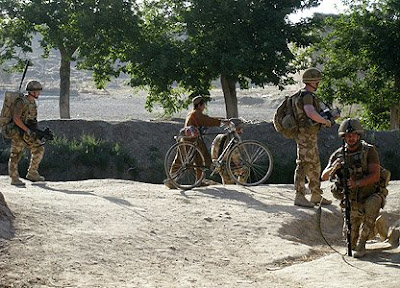 Afghan civilians using mobile phones acted as lookouts for the Taleban before they attacked Lt-Col Thorneloe's Viking convoy, reports the Mail on Sunday. The civilians, who left the area before the attack, had formed a "screen" to observe the convoy, enabling the Taleban to "activate the improvised explosive device".

A military source is cited saying that the early signs are this was a classic "dicking" operation that allowed the Taliban time to set their roadside bombs.

That military convoys in Afghanistan are under constant observation, however, is not at all news. The photograph shown was published by the BBC last year to illustrate the nature of the problem, suggesting that the boy with the bike could be a dicker.

We discussed the role of dickers only last week and, in the context of the Thorneloe incident, further undermines the case for the Viking.

Its off-road performance is widely cited as enhancing "tactical mobility", making the movements of the vehicle unpredictable and thereby frustrating the attempts of the bombers. But, were there is constant observation, that dynamic changes and the unpredictability factor is of less value, especially when the vehicle is being used for supply runs and similar "routine" tasks.

The term "dicker" seems to have been coined in Northern Ireland during the Troubles where, perversely, the very presence of "dicker screens" was often used to warn of impending action or terrorist activities (see this report - 156 pages pdf). Similarly, the sudden departure of civilians from an area and, particularly, the absence of children, are all "indicators" that trouble might be imminent.

The broader point from this, though, is that the measure of "tactical mobility", as applied to a conventional military campaign, needs to be redefined in counter-insurgency operations. All too often, as was the case in Iraq, freedom of movement was limited not by physical restraints but by politically imposed measures directed at casualty avoidance – often in response to media publicity or in anticipation of such publicity.

Under these circumstances, vehicles with good terrain crossing performance or other attributes (such as size or weight) can end up being less mobile than vehicles with inferior performance but with higher protection levels.

Judgement of the "mobility" criteria for a military vehicle in a counter-insurgency campaign, therefore, has a political as well as military element. Neglect of the former can impinge on the latter.

That was the essential mistake made by the military planners in deploying the Viking. In judging its suitability on military criteria alone, they neglected the political dimension. Had, of course, this been taken into account, the vehicle should never have been deployed, exposing a capability gap that would have had to have been filled. 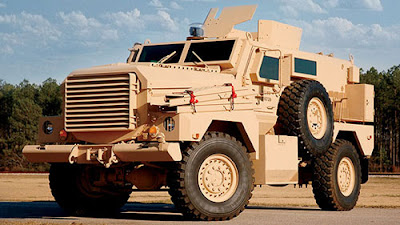 Here, the "experts" recoil in horror at the thought of a "quick fix" which might be good enough for most roles but not providing the perfect answer – such as to take a standard MRAP - a 4x4 Cougar would do nicely (illustrated above) - and fit it with tracks from an already existing vehicle, such as redundant M-113s, for example. 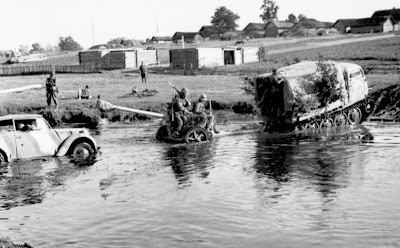 Once again, though, one must draw upon German World War II experience where, after the mobility problems experienced on the Eastern Front in 1941, the Army had a fully-tracked supply truck up and running for the 1942 season. Developed by Steyr, it was called the Raupenschlepper Ost (illustrated above) and used the transmission of the standard 1½ - tonne truck. Although far from perfect, it gave valuable service until 1945, with over 28000 vehicles produced. 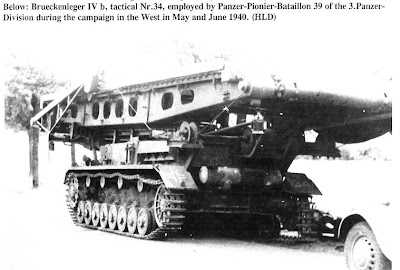 Incidentally, another aspect of the mobility equation, the bridging tank, was available and used successfully by the German Army in 1940 (illustrated above). Such bridging equipment is currently on the British Army inventory and, with the web of canals and watercourses in Helmand, there should be plenty of use for it, providing additional flexibility that even the Viking cannot match.

In this realm, there are no insoluble problems – only lack of will and application. But a nation that is not flexible and cannot improvise is one that is past its sell-by date and does not deserve to win.