Time to get this sorted 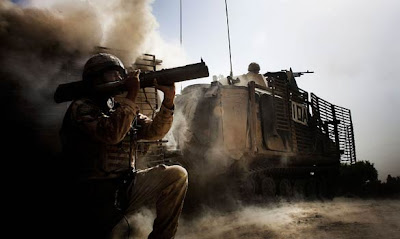 With the recent deaths of Lt-Col Thorneloe and Trp Joshua Hammond, the number of service personnel killed in Afghanistan by mine strikes and IEDs while riding in poorly protected vehicles rises to 49 by our estimate.

With 140 KIA, that amounts to 35 percent of deaths due to enemy action (or accidental minestrikes from legacy mines). Perhaps twice as many service personnel have suffered very serious injuries, losing in total 150 or thereabouts skilled personnel. Without taking into account the huge financial costs, the Military cannot afford this unnecessary attrition.

Yet from the man on the spot, working for The Times comes one very obvious remedy, which the man himself fails even to recognise. The man in question is Tom Coghlan who records his experience riding in a Viking re-supply convoy, and an incident similar to that which killed Lt-Col Thorneloe.

Coghlan starts his piece with the effect: "The blast from the roadside bomb was a breaking storm of noise and shock that scrambled the senses and shrouded men and machines in a white pall of choking dust," he writes, with the description continuing thus:

Long seconds of uncertainty followed, before torch beams swept the evening gloom to reveal the silhouette of the sixth vehicle in the convoy, an armoured supplier, sagging sideways and half off the track. Its cabin was a shambles of metal. Its machinegun turret and its gunner were missing.

There was no sign of a follow-up ambush, but one might be imminent. On the internal radio of the Viking armoured car, an 11-tonne tracked personnel carrier, the crew swore softly and bitterly. "I wish they’d show themselves so I could f*****g ..." one voice said, trailing off to anguished silence.

The first five vehicles in the convoy had passed over the bomb before it detonated under the sixth, injuring but not killing two of the occupants. About 25 minutes after the blast the injured men were on an American Blackhawk rescue helicopter – not, incidentally, a British helicopter. We will return to that.

With the convoy now stranded two miles from its base, the troops have a nervous overnight wait for a recovery vehicle, suffering a Taleban ambush at 8am when they sustain more casualties. Why a recovery is not mounted immediately is not explained.

At last however, a rescue party arrives – a recovery vehicle, escorted by two Mastiffs. Coghlan calls then "armoured cars", which is a very odd choice of words. Cars, they most certainly are not. To call them merely "armoured" is also to miss their essential attribute. Unlike the Vikings, they are mine/blast protected vehicles.

That attribute is immediately tested. We learn that, as it neared the convoy, the lead Mastiff was caught by another buried bomb. However, Coughlan records, "Its heavy armour saved the crew, but it had to be recovered by the vehicle it was escorting."

So, putting it together – a Viking is hit by a bomb. Two crew are injured and need medevac. A Mastiff is hit by a bomb in the same location, and the crew walk away uninjured. And Coughlan draws no lessons from that at all.

The inference must be, of course, that had Lt-Col Thorneloe and his driver been riding in a Mastiff, they would still be alive today. No one yet has been killed in a Mastiff, even though it is covering the same territory as the other vehicles in theatre and taking many hits.

There is, of course, the mobility issue, with the Viking able to traverse terrain that is not accessible to the Mastiff, although it seems unlikely that a supply route could have been particularly challenging. And in any case, we have addressed this issue. If there is a mobility problem with the Mastiff, put half tracks on it.

Furthermore, someone in authority needs to ask of Force Protection if the Ridgeback or Cheetah can be turned into a fully-tracked vehicle. If the Germans could do it with the Opel Blitz in 1942, there cannot be any insuperable technical problems in 2009.

Another aspect of "mobility" however, is weight, especially relevant in the Thorneloe incident, where canal crossings were being used. Against the 12 tons well-distributed weight of the Viking, the 23 tons of the Mastiff undoubtedly causes severe strain on the primitive road system and very often exceeds the load-carrying capabilities of rural bridges.

As an alternative, there is the Ridgeback, nine tons lighter than the Mastiff 2, which is now in theatre. Not only that, sitting in South Carolina at the Force Protection plant are 50 unused Cheetahs which at 11 tons, come out at roughly the same weight as the Viking yet confer the same degree of protection as the Cougar, on whuch the Mastiff is based.

Here, we also need to look at the bigger picture. In the crossing of the Rhine in 1945, within 24 hours of the initial assault, the Allies had 36 crossing points established. Assault bridging is a speciality of the British Army and there is also that miracle of British engineering, the Bailey Bridge - or its modern equivalent.

We have long argued that the engineering component of the British forces needs substantially to be enhanced. Not least, locals also find difficulties with access, getting farm machinery and commercial trucks across canals. The "hearts and minds" aspect of such engineering works cannot be overstated, to say nothing of the tactical flexibility afforded.

Looking more specifically at the incident in question, there is also the question of why Thorneloe was taking a high-risk journey in a ground vehicle. A tactical commander might be better served by a helicopter or a STOL aircraft, such as a Pilatus Porter.

Then, having chosen a ground vehicle, one has to ask why a supply route was not cleared and then – whether or not it had been – why it was not under continuous video surveillance (by UAVs or ground assets) to prevent the Taleban bomb emplacers doing their deadly work. Given Coghlan's experience, and the fact that the IED is now the Taleban's weapon of choice, it could hardly have come as a surprise that this incident occurred.

As in life, there are always plenty of reasons one can find for not doing things and excuses there are a plenty when things go wrong. These we see in quantity in this man's Army, but the excuses are wearing extremely thin. It is time to get this problem sorted.