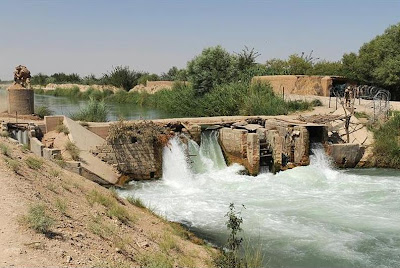 One of the reasons, we are told, why Lt-Col Thorneloe and his driver Trooper Joshua Hammond could not have travelled in a better-protected Mastiff and instead were killed in a fatally vulnerable Viking was that the bridge network across the Shamalan canal, where the fighting is at its heaviest, was in poor repair and too weak to bear the weight of the heavier vehicle.

The Ministry of Defeat has now released a picture of one of the bridges (above) and simple inspection confirms the poor state. If the other bridges spanning the canal are in anything like a similar condition, then it is not at all surprising that the 23-ton Mastiff could not be used.

One would have thought, therefore, that the bridge network would have been a high priority for redevelopment funding, contributing not only tactical mobility for the Army and the Afghan security forces but also the local population who need a better network to move their equipment and goods.

But that is to reckon without those geniuses in the Department for International Development. Although they have been extremely busy in the Shamalan canal area, they have had slightly different priorities on which to spend British taxpayers' hard-earned cash.

Called Bolan Park, when it was completed just over a year ago, it had "puzzled residents" asking why so much money was being spent on leisure when the most pressing problem – security – was getting worse by the day. Said Amir Mohammad, 44, "If the international community wants our country to be prosperous, they should first worry about peace and security. Then we can have parks." 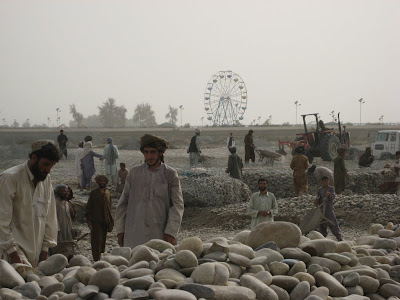 As to the idea of a park for women, Mohammad Zaher stated the obvious: "The problem is that men are not accustomed to going to parks along with their women. And they won't let women go on their own." Abdul Halek, 22, agreed. "Although our house is very close to this park, we will never let our women go there," he said. "This park will be only for men."

Gul Mohammad, 35, a farmer, had a more pressing reason why women – or anyone else for that matter – would not use the park. He said, "For two years now, there have been remote-controlled explosions on the main Bolan road. I think mines will be laid in this park. That will keep people from going there."

But those brave chaps from DFID nevertheless persevered, trilling away that the nearly 20 acres would provide fresh air, fountains, flowers, picnic areas and recreational facilities for Lashkar Gah's estimated 100,000 people.

As for the IEDs that have been killing "Our Boys" – many of them now home-made using agricultural fertiliser - the aid agencies thought about that as well. Very helpfully this season, they have supplied the Taleban Afghani farmers with a total of 4,749 metric tons, conveniently packaged in 25-kilogram bags.

With such wonderful, intelligent support from our gifted civil servants, we cannot possibly lose the war in Afghanistan. We can look forward to moving from triumph to triumph, allowing the Afghani citizens to revel in their paradises of fresh air, fountains, flowers, picnic areas and recreational facilities provided so generously by British taxpayers.