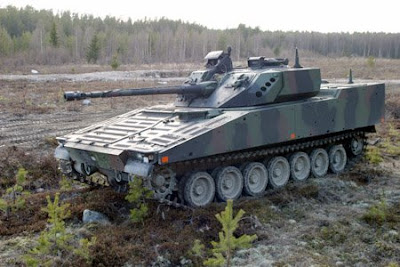 We are informed that the MOD is to invite two British companies to tender to supply reconnaissance and reconnaissance support variants to replace the aged Scimitar and Spartan vehicles now on operations in Afghanistan.

The two companies are BAE Systems Global Combat Systems and General Dynamics (UK), who will be bidding for a project grandly named the Future Rapid Effect System Specialist Vehicle (FRES SV). In reality though, with the FRES utility vehicle dumped for the foreseeable future, this is simply a much overdue replacement for the CVR(T) series which should have been scrapped many years ago.

General Dynamics will, no doubt, be offering a version of the Piranha, configured on similar lines to the Canadian LAV-25 Coyote - arguing for commonality with the proposed Utility Vehicle, if it is ever purchased.

BAE Systems may be submitting a version of the Swedish-built CV-903 Mk III, recently purchased by the Danish Army (pictured), on the basis that a tracked vehicle would be more suitable for the role.

Whichever platform is chosen, the likelihood is that it will be fitted with the French-designed Nexter CTA-40 caseless ammunition gun, together with the BAE System turret which is being used for the Warrior Lethality Improvement Programme (WLIP).

Although the prospect of a replacement for the CVR(T) series is good news – which should always have been put ahead of the utility vehicle – by the time the MoD nannies have finished with their procedures and integration programme, it could be some years before we see any new kit in theatre. By then, of course, it will be the Tories who will have to pay the bill.