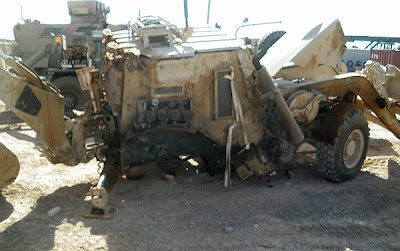 In the Mail on Sunday is an op-ed from veteran journalist Philip Jacobson, under the heading "The Americans understood the danger of IEDs – why didn't we?"

That statement is not without irony as today we learn that four US soldiers were killed on Saturday in an IED explosion in Helmand province, apparently in two separate incidents - the number now reduced to two killed, after officials reported there had been a double-counting error.

Whether two or four, these latest US death underline the deadly peril of this weapon and, in getting Jacobson to write about it, the Mail on Sunday has chosen well. He is not new to the subject and wrote a long piece for The Sunday Times Magazine in September last year, called "The success of the home-made bomb." Even after this elapse of time, it is still fresh and worth reading.

In his current article, Jacobson revisits his previous work, telling us of Lt-Gen Thomas Metz, director of the US Joint Improvised Explosive Device Defeat Organization (JIEDDO), the organisation established in the summer of 2005 when the IED threat was growing to epidemic proportions in Iraq. While Metz's organisation currently enjoys a budget of $15 billion, Jacobson charges that our soldiers in Afghanistan are "facing a tough, resilient enemy with demonstrably inadequate resources".

To develop his thesis, Jacobson reminds us of the Snatch controversy, noting the "start contrast" between the US "no-expense-spared programme” and the reluctance of the MoD to provide a sufficient number (or any) armoured vehicles capable of surviving heavy IED blasts.

This remains a burning issue, he writes, recalling how in 2004, the US Marines were enthusing about an RG-31 which had sustained severe damage from an IED while the crew had escaped unharmed. Jacobson's memory is faulty here, as the incident happened in early 2006 (as late as November 2005, the Marines were still mainly concerned with up-armouring Humvees) but he recalls correctly that the incident was brought to the notice of the MoD by "Conservative politicians" (via this writer), only to be told that the RG-31's "size and profile" did not meet their needs.

Readers will recall the hostility and prevarication we encountered then, over three years ago, when the Army's idea of a protected vehicle was a Pinzgauer Vector. This has continued undiminished, where the Viking's mobility was seen as far more important than keeping soldiers alive and where the Jackal again elevates mobility to supreme status and relegates protection to a poor second. Now we see the substandard Husky being chosen in preference to the better-protected Oshkosk M-ATV and the even better Cheetah.

Jacobson argues that it is crucial that we adapt to the real threat we face and regards it as not merely unintelligent, or negligent, that a "front-rank industrial nation" cannot do better for its endlessly gallant soldiers. It is criminal, he says. Yet, the "criminals" continue in place, and the men will keep dying, while the politicians attempt to "park" the issue in the hope that it will go away.

(The pic, incidentally, is something the MoD got right-ish – despite the panning of the media. It is an armoured JCB High Mobility Engineer Excavator, blown up by an IED while it was digging a culvert. The driver survived. Pic courtesy of El Tirador Solitario.)