We don't know the half of it 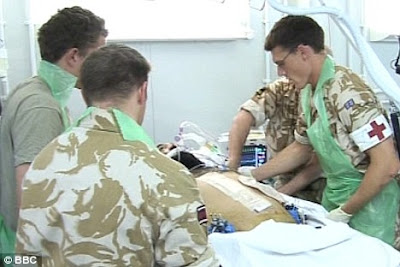 Two more deaths have been added to the growing list of fatalities arising out of operations in Afghanistan. According to the MoD, one was a soldier from The Light Dragoons, killed "as a result of an explosion that happened whilst on a vehicle patrol in Lashkar Gah." In the other incident, a soldier from 5th Regiment Royal Artillery was killed by an explosion whilst he was on a foot patrol in Sangin district.

Not untypically there is little extra detail, and the vague description of a "vehicle patrol" offers no clue as to the type of vehicle involved. The Light Dragoons operate Scimitars, Spartans and Jackals so it could have been either. If it is a Jackal, that would bring to 12 the number killed in this type.

But, if we get very little detail about the fatalities – although more information often seeps out – we know much less about the wounded and their circumstances – unless they themselves tell the media. One such is 2nd-Lt Guy Disney, also of The Light Dragoons, who lost a leg in the same incident in which Pte Robbie Laws was killed.

Disney's story is told in last weekend's Mail on Sunday, from which we also learn during the first phase of Operation Panther's Claw, the spearhead 700-strong Light Dragoons Battle Group suffered 55 casualties of all kinds, including heat exhaustion and battle shock.

The Mail journalist Richard Pendlebury, in his piece about Disney, estimates that the killed to wounded ratio – as high as 1:3 in Vietnam – has now plummeted to 1:8. This is the result, in part, of speedy evacuation and the heroic medicine performed by the highly skilled military surgical teams.

While the MoD claims to withhold the details of wounded soldiers for reasons of "patient confidentiality" there can be no doubt that that the absence of any reports is extremely convenient in concealing from the public the carnage happening daily, at a rate far higher than the fatality rate would indicate. If, for instance, if the Vietnam ratio applied to this theatre, we would be looking not at 160 killed in action, as the figure now stands, but at well over 400.

For those of us whose grim task is to monitor the welfare of troops in the field, and to ensure that they are a best protected as possible, the lack of broad casualty data may also distort perceptions, when the only metric available, to which any detail is attached, is the fatality.

Often, the difference between a death and a "very severely injured" is a matter of pure chance while, on the other hand, when the enemy is "trying out" a vehicle in the field, early attacks may be – in their terms – less successful, yielding only injured, rather than the deaths for which they are aiming. Only later, when they get the measure of the vehicle, does the death rate climb.

This was definitely our perception – based on anecdotal reports and other evidence – that in al Amarah in 2005, there were a considerable number of injuries in Snatch Land Rovers before a significant number of fatalities were experienced.

Equally, in Afghanistan, there have been a significant number of attacks about which we have known nothing, although details of two have recently drifted into the public domain.

One report told of Carl Clowes, 23, from Bradford who in July 2007 was in a Land Rover in Helmand when it drove over a mine. Both his legs were crushed and he suffered more than 20 injuries. His left leg was amputated below the knee 10 months later and he still suffers pain in his right leg. He can now walk only short distances without the aid of crutches.

Another told of Lance Corporal Jonathan Lee who, in October 2007 in Afghanistan, was riding in a Snatch Land Rover when a bomb blast threw him 50 yards into a minefield. He lost a leg.

Knowledge of such incidents would help inestimably to judge whether specific vehicles were too fragile for deployment, as indeed would information on near misses, where no injuries or even damage occasioned. Here, though, there are serious operational security implications. The Army is naturally reluctant to give free after-action reports to their enemy, only to have this vital information used against troops as attacks are refined and strengthened on the basis of the details supplied.

Nevertheless, we note that the MoD is quite willing to release details when there is a propaganda advantage to be gained, witness a recent MoD-inspired report on a failed attack involving a female Jackal driver.

From this we learn, incidentally, that the Jackal was "guarding a supply convoy", the very antithesis of the purpose for which this vehicle was designed - as a Special Forces "raider", relying on speed and mobility rather than armour for protection. Tied to a predictable convoy route, this type of vehicle is a highly vulnerable target.

Elsewhere, we learn, via Lt-Col Stephen Cartwright, CO of The Black Watch, 3rd Battalion The Royal Regiment of Scotland, that Jackals were used in the Panther's Claw operation, to seize ground at the top of the Shamalan Canal in preparation for the link up with the Welsh Guards. This is, again, not the purpose for which these vehicles were designed or procured. They are effectively performing the role of light tanks or armoured cars.

Then, also, we learn of a serious injury in a Jackal, from the Runcorn and Widnes Weekly News. It tells us that, on 16 July, L/Cpl Wayne Cox, of The 2nd Battalion the Rifles, was seriously injured by an IED while driving a Jackal in the Kajaki area. This, of course, is not within the Panther's Claw operational area, and amounts to yet another guerrilla-warfare type of ambush, against which the Jackal is ill-protected.

The paucity of detail, where details have to be culled on an almost random basis, has another effect. Recently, we learned of a court case taken by a civilian engineer wounded in a bomb blast in Basra in late October 2003, while riding in an unarmoured Land Rover Discovery.

This was Graham Hopps who lost a shoulder in the incident and was claiming for damages against the Ministry of Defence and his employer, arguing that he should have been provided with a better-protected vehicle,

The judge, Mr Justice Christopher Clarke, however, ruled that he did not believe that an armoured vehicle would have prevented Mr Hopps from suffering the same injuries. He also concluded that the security conditions in Iraq at the time were not bad enough to require his employer to issue its workers with armoured vehicles.

Considering that there had been three bomb attacks against vehicles that week – that we know of – and Army vehicles had also been attacked with fatal results, it is hard to see how Mr Justice Clarke could have come to that conclusion.

But it is also fair to say that, had we the information on all the incidents that had occurred, Mr Hopps might have stood a better chance of winning his case, especially as the route down which he was being driven was known locally as "bomb alley", which suggests that attacks cannot have been completely unknown.

If, of course, we had confidence that the Army was collecting the information and using it to effect, upping protection as vulnerabilities became apparent, then there would be no need for us to have any information. But we know this not to be the case.

Furthermore, on our own forum, we had an anonymous contributor – the authenticity of whom we have no cause to doubt – who informed us that, prior to its introduction, he had been asked to write an assessment of Jackal for a government department.

Then he had assessed it as a "death trap", saying in his report that he would not be prepared to risk his own life in one. His report, however, was discounted and his judgement considered flawed "because the manufacturers were able to make a convincing case as to why Jackal was the answer to everything."

Issues at the time which had influenced its acquisition were essentially political, based on a need to be seen to be ordering new equipment, the price (cheaper than a Mastiff) and industrial factors, maintaining employment in the UK defence sector and reducing imports. On top of that, there was the Army's obsession with the Land Rover, whence it wanted, "for some unfathomable reason" a replacement for the WMIK.

As more and more detail emerges, we find that the MoD (and Army) are being less than frank with the reasons for the purchase of many of their vehicles, the reasons they are deployed, the casualties incurred as a result and the reasons why deployment is continued, even when the evidence suggests they should be withdrawn.

Effectively, we don't know the half of it, that very lack of knowledge used against us by an MoD which cites our "ignorance" as a reason for ignoring our findings, claiming greater knowledge of a situation which it will not share.

That is unlikely to change but even the simple and crude death rate is sometimes telling a devastating story. If this latest fatality is related to a Jackal, it will add further to the growing evidence as to its dangerous vulnerability. We may indeed not know the half of it, but what we do know is occasionally enough.