They should not have died 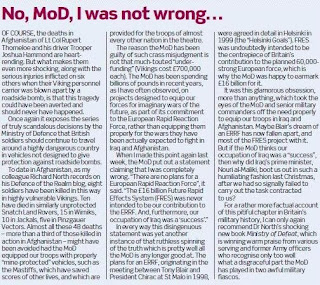 I am sorry if it offends – and it certainly does upset some of the military types, and the "consultants" and designers responsible for the Viking and the decision to deploy it to Afghanistan – but, on the basis of all the evidence we have, Booker and I both have come to the conclusion that Lieutenant-Colonel Rupert Thorneloe and Trooper Joshua Hammond should not have died.

That they did die is the greater offence and, while it must always be remembered that the proximate cause was a Taleban bomb, in a cold-blooded act of murder, the neglect of the MoD and all those involved with the deployment of this vehicle is a contributory factor. Thus does Booker in his column today point the finger squarely at the MoD.

From Mick Smith (and others) in The Sunday Times, we get the first published confirmation of that which we had already worked out, that Lt-Col Thorneloe was riding in the front passenger seat of the Viking. With his driver, they were in two of the most vulnerable positions in a dangerously vulnerable vehicle.

In other circumstances, writes Smith, Thorneloe would have travelled by helicopter; but it appears none was available. He notes, however, that the MoD declined to confirm or deny this.

Without this facility, and wanting to "get up among his boys at the first possible opportunity," Thorneloe found that, "A resupply convoy was going up there and he hitched a lift on that." As the Viking approached a canal crossing, it passed over a hidden IED which destroyed the front cab. Thorneloe and the driver, Hammond, died instantly.

The lack of helicopter notwithstanding, if Thorneloe had not been in the vehicle, someone else would have died. And the incident would already have been a footnote in the history of the campaign, blanked out by the operations being mounted, not least the big push by the US Marines further south.

As for the Viking, this was originally produced as an amphibious assault vehicle and delivered to the Royal Marines in 2001, for use in the Arctic Circle as a mobility platform when reinforcing the Nato northern flank, assisting the Norwegians against a Soviet invasion. It was a Cold War machine, designed for a different purpose.

In that role, the question of protection had been considered – and the machine was armoured against ballistic threats. However, within the "Littoral Manoeuvre" parameters set at the time, a decision was made deliberately to skimp on mine protection to save weight. This was to enable the machine to be lifted by a Chinook helicopter and to maintain the amphibious free board clearances.

Before deploying the machine to Afghanistan, the protection levels were reviewed but, despite the known mine threat, the "assumptions about the overall mobility benefits" were considered valid – the ability to swim and be lifted by a Chinook. With no Chinooks actually available to lift these machines, therefore, the Viking went in October 2006 to war dangerously unprotected, simply to maintain its ability to swim through the waters of landlocked Afghanistan.

The original protection level was specified as proof against an explosion of no greater than 500gm under the belly, with a higher resistance to a blast under the track. This was claimed to meet the technical standard known as STANAG 4569, to level 2a – resistant to a 6kg explosion and thus protection against a common Russian anti-tank mine, the TM-46, with a charge weight of 5kg.

However, also present in some numbers in Afghanistan is the Russian TM-62M, with a charge weight of 7kg and fuzes which enable these mines to be detonated against the belly of a vehicle, or by vibration rather than contact, as the vehicle passes over the mine without the wheels or tracks riding over it. 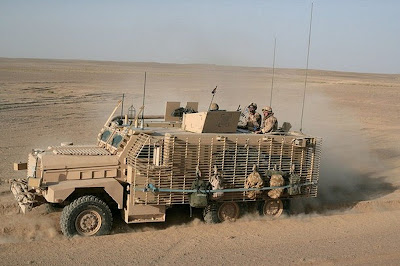 For that reason, the US mine and blast resistance standard – for an underbelly explosion - is set at 7kg, and it is this standard that the British mine protected Mastiff (pictured above) also meets and in fact exceeds a level equivalent to STANAG level 3b.

At that level of protection, no soldier has ever been killed in a Mastiff in either Iraq or Afghanistan, despite being hit by explosives considerably exceeding its stated protection level. Much of that is due not to the blast resistance, as such, but to the v-shaped hull design of the Mastiff, which the Viking also does not have. It is entirely reasonable to assert, therefore, that had Thorneloe and Hammond been riding in a vehicle similarly protected and designed, they would have survived the blast.

However, the reasons for the MoD's neglect in not providing suitable vehicles are complex. Originally, the Viking was Royal Marine equipment, sent to Afghanistan because that was their standard mobility platform, with which they had trained.

So short of high mobility platforms was the Army though, that when the Marines departed after their six-month tour, a decision was made to keep the Vikings in theatre. Had they been withdrawn then, the MoD might just have got away with it, because the Taleban had not yet worked out quite how vulnerable these formidable-looking machines were, and how easily they could be destroyed.

The shortage of vehicles was nothing to do with money – as Booker reminds us in his column. At £700,000 each, Vikings are far from cheap, and neither is their maintenance. What had happened since 2003 was that, in effect, the Army had frozen development or purchase of any new armoured vehicles, while it worked up plans for a £16 billion fleet of high-tech wheeled armoured personnel carriers and other armour to meet Blair's commitment to the European Rapid Reaction Force (ERRF).

Although faced with a vicious insurgency in Iraq and then Afghanistan, the politicians and the Army were not prepared to spend on new specialist vehicles for these theatres, protecting instead the funding stream for the ERRF equipment.

Without that – had they given the time and attention to the needs of these real wars, instead of the imaginary wars of the future alongside our European "partners" - it would have been perfectly possible, even with limited funding, to have developed a high mobility platform for the Army, with the same protection levels of the Mastiff. That would have allowed the Marines to keep their Vikings for the role for which they were originally designed – amphibious assault.

That this has been the case has been hotly denied by the MoD, which is already facing legal cases over its deployment of the Snatch Land Rover. But the real story is told in Ministry of Defeat, an account "winning warm praise from various serving and former Army officers who recognise only too well what a disgraceful part the MoD has played in two awful military fiascos," writes Booker.

Already, we have been booted out of Iraq by prime minister Nouri al-Maliki, after we had so signally failed to carry out the task contracted to us there, and as our troops have been slaughtered in poorly protected vehicles in Afghanistan, on the altar of "European co-operation", it must surely be only a matter of time before we hand over completely to the better-equipped Americans – whose Marines have left their amphibious assault vehicles at home – declare another great "victory" and depart.

In the meantime, in the baking heat and dust of Afghanistan, more soldiers must die. Many more will be seriously injured.