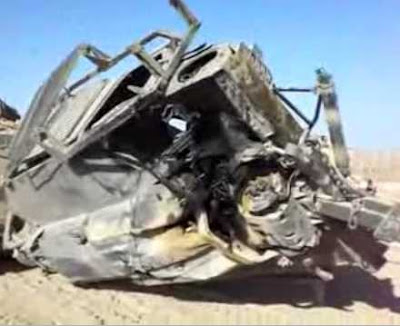 Having egregiously failed in its role of questioning the MoD's often lacklustre choices of vehicles, The Guardian, via Richard Norton-Taylor and Mark Tranc, now rush to give house-room to defenders of the Viking.

Thus we see the headline "Former officers defend vehicles as Afghanistan bomb deaths investigated," with the strap line: "Use of Vikings questioned after British commander and soldier are killed, but analysts say size of Taliban bombs surprises military."

Right up front, as one might expect, is the legend of the "huge" bomb, an issue to which we are going to have to devote a full post. Suffice to say at this juncture that the alacrity with which this legend has been embraced suggests that it provides more than an element of convenience.

Turning to the "former officers" who are so stalwart in the defence of this failed vehicle, the first is Amyas Godfrey, a former infantry officer and fellow of the Royal United Services Institute.

However, one needs only to look at the list of RUSI's corporate sponsors, and its proximity to the MoD to know where Godfrey stands. If "big oil" is forever accused of supporting "climate deniers", any such relationship is nothing compared with RUSI and the arms dealers, with BAE Systems, supplier of the Viking, right up front.

So it is that Godfrey tells us: "You have to remember that Vikings were deployed to fill a very specific function," referring to the bridges and canals of the "green zone" along the Helmand river. "You are sacrificing mobility for protection but mobility is itself a form of protection", said Godfrey.

This, needless to say, is the favourite MoD mantra, so it is no surprise to see it trotted out here, despite the fact that we are now looking at eight deaths in the Viking and even more in the popular all-terrain vehicle the Jackal. Despite this, Godfrey hastens to inform us that "even the Mastiff had been vulnerable to roadside bomb," neglecting to say that there have been no deaths in Mastiffs, as against 18 in the mobility-duo.

The second of the apologists is Charles Heyman, another former Army officer and now a military consultant – with sources of income undeclared. He states that it is "impossible to judge decisions and the circumstances" surrounding Lt-Col Thorneloe's death.

That may be the case, but the facts speak for themselves. Thorneloe was riding in a perilously fragile vehicle in an area infested with Taleban, where there was a recent history of successful IED attacks in a campaign where the IED is the enemy's weapon of choice. No much judgement is actually needed.

If that constitutes the offerings of the witnesses for the defence though, The Guardian has not finished yet. It tells us that the Viking was introduced into Afghanistan three years ago, but last year the MoD admitted it had reached the limit of how much it could be armoured following a number of deaths involving roadside bombs.

Never fear though, we are also told that it is due to be replaced by the new Warthog vehicle next year, with Gordon Brown announcing that it would provide "improved protection for our forces". So that's alright then.

Everything Mr Brown says must be true, and of course, if officialdom claims that a vehicle offers "improved protection", that must also be true, just as it was with the Vector and the Viking, when these vehicles were introduced – to say nothing of the Snatch Land Rover and, latterly, the Jackal.

In a bizarre reference, the paper then tells us that, "In another move to counter the threat of roadside bombs, a new class of mine-clearing vehicles – including the Buffalo mine-protected vehicle – is also being developed."

Yet, far from being "developed" the Buffalo has been in use by US forces in Afghanistan since 2002 and was rejected by the MoD in 2005. Only in October last did the MoD relent and order a batch, which are not due for delivery until next year. How easy does the MoD escape censure.

Even the disaster with the Vector gets skated over as we learn that the "Army's Snatch Land Rovers, which have been particularly vulnerable to attack, are also to be upgraded to a new variant – Snatch Vixen – with more power and better protection."

Never mind that the Snatch was supposed to have been replaced by the Vector, at a cost of £100 million, a vehicle which has since been withdrawn, requiring a rush upgrade at a cost of £5 million to produce the Vixen, in order to fill a yawning capability gap.

But then, we do too much justice to the authors, taking this work seriously. The comments on the Buffalo and Vixen are a straight "lift" from a Press Association report dated 29 October 2008, used by hundreds of local paperson the day, and then re-cycled on 21 April of this year, again used by hundreds of papers and also used today by the Daily Mail. This is "cut and paste" journalism at its finest, splatted into the copy without even momentary brain engagement.

A similiar technique is used to pad out the piece by adding comments on the Viking, where the authors note there "have been a number of deaths involving Viking armoured vehicles in Afghanistan." The "cut and paste" this time is also Press Association copy dated 10 June and used by, amongst others on the day, the Daily Mail once more. With dreadfully familiar words, we are informed that, last month, "the Grimsby district coroner, Paul Kelly, praised the MoD for identifying a problem with the vehicle and taking steps to solve it".

This was the carefully executed cover-up perpetrated by the MoD, but The Guardian takes it at face value, the words pasted in to fill the space with neither thought nor analysis.

With such lazy - if not dishonest - reporting, the MoD needs have no fear of being outed. It can continue wasting taxpayers' money and allowing its soldiers to be slaughtered as long as The Guardian is on the case.

Not even The Guardian though can compete with Con Coughlin on his clog. "Fatuous" does not even get close, when he writes: "Even though Lt-Col Thorneloe was travelling in a well-protected, £700,000 Viking armoured vehicle, that was specifically designed to protect British soldiers from roadside bombs, the Taliban have succeeded in designing a device that can kill or maim the occupants."

The great sage then opines that the "only effective way to counter the threat of these attacks is to have more men on the ground to guard territory that has already been seized from the Taliban. That would make it harder for the Taliban to plant the kind of device that killed Lt-Col Thorneloe."

With "friends" like this, who needs enemies? Some sections of the media are more deadly than the Taleban.