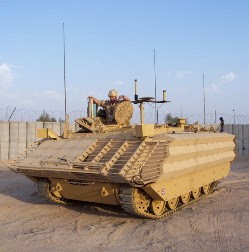 Not a few people in very senior positions, in government and the military, have made disparaging remarks about the low grade of journalists serving as "defence correspondents" in national newspapers. Sometimes, that must be considered as self-serving, but it has to be said that, in many instances, those journalists leave themselves wide open.

In the last week or so, we have seen an unusually high crop of reports on military matters – for obvious reasons – and amongst them, not a few errors. We have already had this gem from the BBC and another from the Mirror but the harvest is not over.

More recently, of the more egregious (or certainly more obvious), we have Sean Rayment – an ex-Army officer – who writes in The Sunday Telegraph about, "The flimsy armoured vehicles which were first sent to Helmand ... ". But his list includes, "armoured personnel carriers dating from the 1960s and rebranded as Bulldogs". These vehicles, of course, were deployed to Iraq, but have never been sent to Helmand. Nor, in the up-armoured form, are they particularly "flimsy".

Then we have Michael Evans in The Times write that " ... a soldier from the 2nd Battalion The Mercian Regiment died when he was hit during a rocket-propelled grenade attack against his Scorpion armoured reconnaissance vehicle."

The Scorpion was, of course, withdrawn from British Army service in 1994. It cannot, therefore, have been sent to Helmand, nor attacked by an RPG. The vehicle is believed to have been a Spartan. There is also an issue here, that the Mercians do not operate an "armoured reconnaissance vehicle", the actual vehicle of the series being a Scimitar.

Today, we have Richard Pendlebury and Jamie Wiseman writing in The Daily Mail about "ageing equipment" that "often offers little protection against the bombs", whence they refer to "armoured Land Rovers known as Bulldogs".

They mean either Snatch Land Rovers or Vixens. There is a picture of a Bulldog at the top of this piece.

In the context of the vehicles being branded "ageing", they refer to the "Viking tracked vehicle". These were not issued to units until 2001 – which is positively youthful in military terms - and many of the vehicles delivered to Helmand were brand new. But the pair also tell us that IEDs planted in the path of military vehicles "usually include armour penetrating rods or cones designed to cause maximum destruction". They don't. In particular, the EFP which projects a copper "cone" is largely confined to Iraq. Very few have been detected in Afghanistan.

Now, we all make mistakes ... my previous piece has one, where I have identified the wrong vehicle which GD intends to submit to the MoD for the CVR(T) replacement competition. But there are mistakes and mistakes. When journalists make such obvious – to anyone with even limited knowledge of the military – and basic mistakes, it suggests that their knowledge base is extremely limited.

That does not, of course, mean that nothing they write can be trusted. Much of what they write will be correct. But it does imply that they are ill-equipped to understand the finer – and often more important – points about military equipment that will enable them to report competently on what they see and are told.

It is Private Eye which runs a regular series commenting on the errors and behaviour of the Fourth Estate – under the heading Street of Shame. We are considering our own version. It looks as if we will not be short of material.