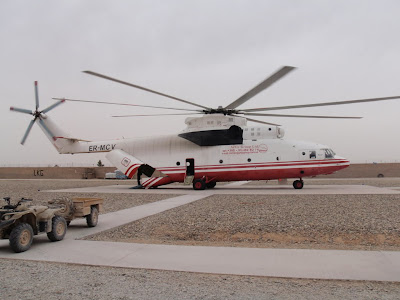 A French regional paper has picked up the Mi-26 crash, it too reporting that the aircraft was under contract to Nato (Otan). Previously, the operator had supplied aircraft for EU military missions in Chad, supporting the Irish contingent. The paper goes on to say:

Surprising it is indeed, and even more so that there has not been a whisper of this in the British media ... except that we know why.
.
The line taken in most of the (very few) reports mentioning the crash suggest the aircraft was shot down by a missile, although a post on the pprune forum states that the Mi-26 was "accompanied by an MTV (Mi-8) that witnessed the tail boom shear from the aircraft." It is not clear at this stage, continues the post, "whether this was due to mechanical failure or the ground fire that both aircraft came under at the time."

Then we have the English edition of Tass citing a director of Pecotox Air, Leonid Tokorenk. He is sticking to the story that the aircraft was supplying "humanitarian aid". The picture above, however, shows the aircraft at the British base at Lashkah Gar a couple of months ago – evidently on a routine supply mission.

Nevertheless, Tokorenk has it that it brought food and water for the people of Sangin. "When the helicopter hovered in the air to throw the humanitarian cargo, it was unexpectedly brought down from a grenade launcher. The tail rotor was damaged and the helicopter crashed to caught fire," he claims.

The idea of a 50-ton helicopter, with its powerful downwash, hovering over the town to drop supplies is frankly laughable. That it should do so in an area where the Taleban are highly active, where five British troops were killed last week and even with the BBC present earlier yesterday, there was firing heard, is positively suicidal.

Thus, the best evidence suggests that the aircraft was taken out by the Taleban as it came to land at the British base. And, with initial reports having the Taleban claim that they had shot down a Chinook, that is quite possibly what they thought they were doing.

One is reminded of the three recent incidents where the Taliban had attempted to shoot down a British helicopter. This incident would suggest they are still trying – and had succeeded, albeit shooting down the "wrong" helicopter.

This would also explain the sensitivity of the British government and why it is suppressing reports of this incident. It has long been known that the Taleban have been looking for a "spectacular" and, after the public and media response to the last batch of casualties, it needs little imagination to gauge the reaction if a Chinook, fully-laden with troops, was downed.

The very evident danger also changes the context of the current debate over casualties. Many commentators have been arguing recently that more helicopters should be provided to transport troops, to reduce their exposure to IEDs. Not least is Sir Charles Guthrie the former CDS, who asserts that the lack of helicopters is putting their lives at risk.

And today, the House of Commons Defence Committee is to rush out a report which, according to The Guardian, "is likely to say" that the shortage of helicopters has increased the danger to British soldiers.

The real danger, it seems, is that with helicopters having been picked as the cause celebre, an issue on which – in particular – the Conservative opposition can make its mark, we are getting a highly distorted appreciation of the risks. If this continues, under strong political pressure, tactical judgement could also be distorted, with potentially tragic results.

Under certain circumstances, it could well be the case that ground transport is in fact safer than flying, more so if the right vehicles and tactics are employed. Further, where attacks on vehicles are successful, usually small numbers of soldiers are killed – which would not be the case if a Chinook (or even a Merlin) was downed.

However, with the protected vehicle debate having largely been submerged by the controversy over helicopters, this issue is not being fully addressed – or at all – which means that we could be rushing down a cul de sac where troops end up at even greater risk that they are now. Whatever else, as the downing of this Mi-26 could indicate, "helicopters" are not a panacea – they are an essential part of a force mix, but not a magic wand that will cure all problems.